Alpha Centauri and the Search for Technosignatures

Is there any chance we may one day find technosignatures around the nearest stars? If we were to detect such, on a planet, say, orbiting Alpha Centauri B, that would seem to indicate that civilizations are to be found around a high percentage of G- and K-class stars. Brian Lacki (UC-Berkeley) examined the question from all angles at the recent Breakthrough Discuss, raising some interesting issues about the implications of technosignatures, and the assumptions we bring to the search for them.

We’re starting to consider a wide range of technosignatures rather than just focusing on Dysonian shells around entire stars. Other kinds of megastructure are possible, some perhaps so exotic we wouldn’t be sure how they operated or what they were for. Atmospheres could throw technosignatures by revealing industrial activity along with their potential biosignatures. We could conceivably detect power beaming directed at interstellar spacecraft or even an infrastructure within a particular stellar system. One conceivable technosignature, rarely mentioned, is a world that has been terraformed.

All this takes us well beyond conventional radio and optical SETI. But let’s take the idea, as Lacki does, to Alpha Centauri, which we can begin by noting that in the past several years, Proxima Centauri b, that promising world in the habitable zone of the nearest red dwarf, has found its share of critics as a possible home to advanced life, if not life itself.

Michael Hippke noted in a 2019 paper that rocket launch to orbit from a super-Earth would be difficult, possibly inhibiting a civilization there from building a local space infrastructure. Milan Ćirković and Branislav Vukotić asked in 2020 whether the frequent flare activity of Proxima Centauri would inhibit radio technologies altogether. Whether abiogenesis could occur under these kinds of flare conditions remains unknown.

Alpha Centauri A and B, the central binary, offer a much more benign environment, both stars being exceedingly quiet at radio wavelengths. Moreover, we have known since the 1990s that habitable orbits are possible around each of them. We have no knowledge about whether the evolution of life would necessarily lead to intelligence; as Lacki pointed out, this is an empirical question — we need data to answer it.

The Drake Equation points to further unresolved issues. In what portion of a star’s lifespan would we expect technological cultures to emerge? Our own civilization has used radio for about a century — one part in 100,000,000 of the lifespan of the Sun. Hence the slide below, which is telling in several ways. Lacki refers here to temporal coincidence, meaning that we might expect societies around other stars to be separated in time, not just in space. Hence this simple graph of a very deep subject.

Deep time always takes getting used to, no matter how many times we think we’ve gotten a handle on figures like 4.6 billion years or, indeed, 13.8 billion years, the lifetimes of the Sun and cosmos respectively. I stared at this figure for some time. Lacki has arbitrarily placed a civilization at Centauri B, as shown by the vertical line, and another at Centauri A and C. Our own is shown in its known place in the Sun’s lifetime, except for the striking fact that the thickness of humanity’s timeline on the chart corresponds to a lifetime of 10 million years. If we wanted a line showing our 100 years of technological use — i.e., radio — the line would have to be 100,000 times thinner.

The odds that the lines of any two stars would coincide seem infinitely small, unless we are talking about societies that can persist over many millions of years. But here we can begin to turn the question around. We might want to rethink nearby technosignatures if we remind ourselves that what they represent is not the civilization itself, but the works it created, which might greatly outlive their builders. Objects like Dyson spheres would seem to fit this category and would exist at planetary scale.

Small artifacts can also last for vast periods — our own Voyagers will be intact for millions of years — though finding them would be an obvious challenge (here it’s worth thinking about the controversy over ‘Oumuamua. If a piece of dead technology were to pass near the Sun, would we be able to recognize its artificial nature? I simply raise the question — I remain agnostic on the question of ‘Oumuamua itself).

But can we be sure we are the first intelligent technological society on Earth? It’s worth considering whether we would know it if an advanced culture had existed hundreds of millions of years ago, perhaps on Earth or a different planet in the Solar System. Looking forward, if we go extinct, will another intelligent species evolve? We don’t know the answer to these questions, and the depth of our ignorance is shown by the fact that we can’t say for sure that intelligence might not evolve over and over again.

If interstellar flight is possible, and it seems to be, we can consider the possibility of intelligence spreading throughout the galaxy, perhaps via self-reproducing von Neumann probes. Even with very slow interstellar velocities, the Milky Way could be settled in relatively short order, astronomically speaking. Michael Hart pointed this out in the 1970s, and Frank Tipler argued in 1980 that at current spacecraft speeds alone, self-replicating probes could colonize the galaxy in less than 300 million years.

Sending physical craft to other stars may be difficult, but there are advantages. So-called Bracewell probes could be deployed that would wait for evidence of intelligence and report back to the home system, as well as carrying inscribed messages intended for the target system. This is Jim Benford’s ‘lurker’ scenario, one which he proposes to explore by searching nearby objects in our own system including the Moon. After all, if they might exist elsewhere, there may be a lurker here.

We don’t know how long a probe like this might remain active, but as a physical artifact, it remains a conceivably detectable object for millions, perhaps billions of years. Finding such a probe in our own system would imply similar probes around other stars and, indeed, the likelihood of a civilization that has spread widely in the galaxy. We might well wonder whether a kind of galactic Internet might exist in which information relays around stars are common, perhaps using gravitational lensing.

In other words, the question of technosignatures at Alpha Centauri doesn’t necessarily imply anything found there would have come from a civilization that originated in that system. The same civilization might have seeded stars widely in the Orion Arm and beyond.

All of these ‘ifs’ define the limits of our knowledge. They also point to a case for looking for technosignatures no matter what our intuitions are about their existence at Alpha Centauri. A lack of obvious technosignatures in our system would imply a similar lack around the nearest stars, but we haven’t run the kind of fine-grained search for artifacts that would find them on our own Moon, much less on nearby smaller objects. 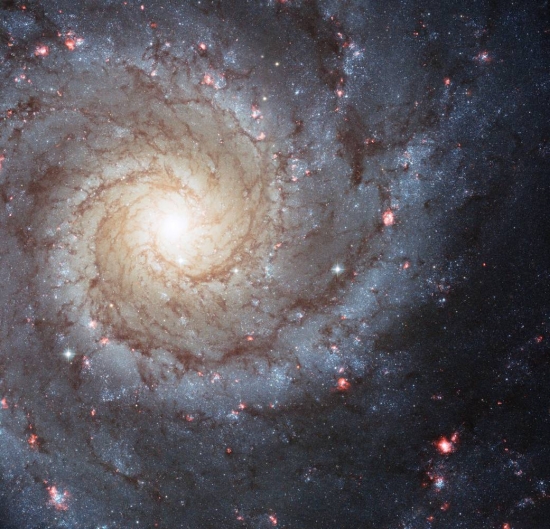 Image: How quickly would a single civilization using self-replicating probes spread through a galaxy like this one (M 74)? Moreover, what sort of factors might govern this ‘percolation’ of intelligence through the spiral? We’ll be looking further at these questions in coming days. Image credit: NASA, ESA, and the Hubble Heritage (STScI/AURA)-ESA/Hubble Collaboration.

Intuition says we’re unlikely to find a technosignature at Alpha Centauri. But I return to the chart on civilizational overlap reproduced above. To me, the greatest take-away here is the placement of our own civilization within the realm of deep time. Given how short the lifetime of technology has been on Earth, I’m reminded viscerally of how precious — and perhaps rare — intelligence is as an emerging facet of a universe becoming aware of itself. That’s true no matter what we find around the nearest stars.

Next post: Planet Formation Modes as a Key to Habitability

Previous post: Voyager: A Persistent Clue to the Density of the Interstellar Medium