Back in the 1990s, when the first exoplanet detections were made, the best possible targets for radial velocity searches were what we now call ‘hot Jupiters.’ Radial velocity looks at the Doppler shift of light as a star moves first towards us, then away, tugged by the invisible planet. A massive Jupiter in a tight orbit tugged maximally, and quite often, because its orbit could be measured in mere days or weeks. It was purely selection effect, but it seemed that such planets were common, until we began to discover just how many other kinds of worlds were out there.

Outer-system Jupiters like ours are a different problem. A gas giant in a multi-year orbit produces a radial velocity signature that is far smaller and dependent upon long analysis. Thus, early numbers on the existence of gas giants in the Jupiter or Saturn class and similarly far from their host star are just beginning to emerge as exoplanet science matures. We’ll be learning more — a lot more — but tentative findings from a major survey bear no real surprises.

Indeed, the longest-duration exoplanet survey to date has found that giant planets like Jupiter and Saturn are normally located between 1 and 10 AU from their host stars. From a statistical analysis of the data, about 14 cold gas giants occur per 100 stars in the galaxy, with the number detected around nearby stars indicating that such planets exist in the billions. The Solar System’s planetary configuration, though not the most common, is hardly unusual.

Dating back to the 1990s, the California Legacy Survey draws on data from the HIRES spectrometer at Keck Observatory (High-Resolution Echelle Spectrometer), as well as from the Shane and Automated Planet Finder telescopes at Lick Observatory, with two new papers on its findings now in process at the Astrophysical Journal Supplement. B J Fulton (Caltech), who is lead author on the second of the two papers cited below, is quick to point out the size limitations of planets used in the survey but finds the data on gas giants compelling:

“While we can’t detect smaller planets similar to Neptune and Uranus that are very distant from their stars, we can infer that the large gas giants like Jupiter and Saturn are extremely rare in the outermost regions of most exoplanetary systems.” 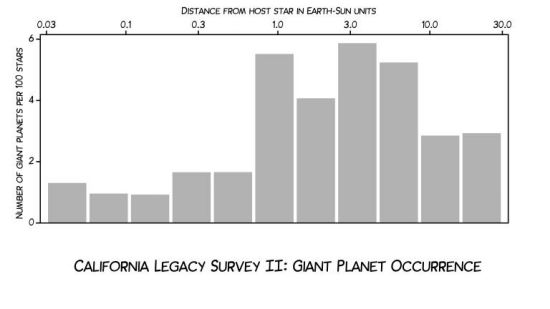 Image: This graph of data collected by the California Legacy Survey indicates that most giant planets in the galaxy tend to reside about 1 to 10 astronomical units (AU) from their host stars. An AU is defined as the distance from Earth to our sun, or about 150 million kilometers. This is similar to what we see in our own solar system: Earth orbits at 1 AU; Jupiter is situated at about 5 AU and Saturn at 9 AU. Credit: California Legacy Survey/T. Pyle (Caltech/IPAC).

The scientists performing the survey over the course of its lifetime observed 719 Sun-like stars (classes F, G, K and M), detecting 177 planets through radial velocity methods, 14 of which were new discoveries. The masses detected ranged between 1/100th and 20 times the mass of Jupiter; the catalog of planets is reported in the first of the papers cited below.

The second paper measured giant planet occurrence as a function of semi-major axis, using a hierarchical Bayesian technique. The paper notes that previous studies have likewise found “a strong enhancement in the occurrence rates of these planets around 1 au.” The occurrence measurements beyond 10 AU are consistent with similar findings from direct imaging surveys.

As the authors note, radial velocity methods are now beginning to discover planets in orbital periods comparable to Saturn’s. The finding is that giant planet occurrence is enhanced by a factor of four beyond 1 AU compared to within 1 AU. Planets more massive than 30 times Earth mass are 2-4 times more common at 1-3 AU than 0.1-0.3 AU.

Although the authors are interested in planet formation models that may be derived from this work, they’re looking to future data to widen the sampling of host stars:

Unfortunately, it is difficult to extract significant constraints on planet formation models from semi-major axis distributions alone. Future planet catalogs produced by Gaia and The Roman Space Telescope will help to measure the precise shape of the occurrence enhancement around 1 au with planet samples several orders of magnitude larger, but the stellar samples will be different from ours. We plan for future works in this series to analyze the host star metallicity, eccentricity, and multiplicity distributions of our sample, in the hopes of uncovering evidence that discriminates between different planet formation models.

So determining the distribution and orbital parameters of gas giants in the galaxy is very much a work in progress as we widen the range of radial velocity detections with longer runs of data. There will be more than one generation of work involved in tightening up such numbers.

The papers are Rosenthal et al., “The California Legacy Survey I. A Catalog of 177 Planets from Precision Radial Velocity Monitoring of 719 Nearby Stars Over Three Decades,” (preprint) and Fulton et al., “California Legacy Survey II. Occurrence of Giant Planets Beyond the Ice Line” (preprint), both in process at the Astrophysical Journal Supplement.