The first thing to say about the image below is that it fills me with anticipation for the imagery that Europa Clipper will acquire when it travels to the Jovian moon later this decade (arrival in 2030, according to current planning). This is a Galileo image taken in 1996, the subject of intense study, as have been all the Europa images, ever since. How much interaction does Europa’s subsurface ocean have with the icy crust? We can’t say for sure how much is going on now, but images like these show how much fracturing and re-formation there has been in the past. In any event, fresh data from Europa Clipper should give us entirely new insights. 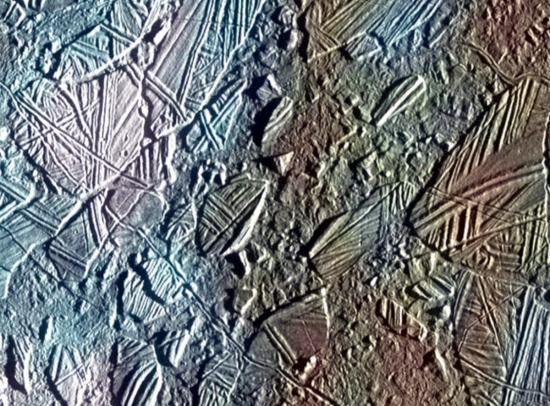 Beyond that, though, there is another story with Europa implications that is being investigated by scientists at Oak Ridge National Laboratory, an installation under the aegis of the U.S. Department of Energy. Because while we can look at the above image and discuss plumes coming up from beneath (and there is some evidence for this), we also have to remember that this may be a different kind of ice than we find occurring on Earth. What we see on Europa and other icy objects in the outer system likely comes under the heading amorphous ice.

The distinction occurs because ice in a cold, hard vacuum shows an atomic structure that is not arranged into a tight crystalline lattice. Somewhere along the line water ice makes a transition between crystalline and amorphous ice phases. Just how this occurs is difficult to observe, but scientists at ORNL, working with colleagues at the Jet Propulsion Laboratory, have been able to lower the temperature of a crystal sapphire plate to 25 K, after which it was placed in a vacuum chamber, where a small number of heavy water molecules (D2O) were added.

The idea was to observe changes in the ice structure with temperature, with plans to simulate outer Solar System conditions by bombarding the sample with electron radiation and charting the effect on the ice structure. Chris Tulk is an ORNL physicist specializing in neutron scattering:

“The experiment produced a layer of amorphous ice similar to the ice that makes up most of the water throughout the universe. This is the same type of ice that could have formed on the extremely cold permanently shadowed regions of the Moon, on the polar regions of Jupiter’s moon Europa, and within the material between the stars in our galaxy, known as dense molecular clouds. Although much of the ice has by now probably crystallized on the warmer bodies, the fresh ice on colder bodies and in deep space is likely still amorphous.”

We know that Europa’s surface is constantly irradiated by charged particles coming off interactions with Jupiter’s intense magnetic field. Just how the ice is changed — and how much of the surface ice turns out to be amorphous — will be factors as we analyze data from Europa Clipper. The laboratory work is also applicable to likely amorphous ices in the Kuiper Belt.

The Spallation Neutrons and Pressure (SNAP) diffractometer at Oak Ridge’s Spallation Neutron Source is the site of these experiments. Here the researchers have configured the instrument to achieve conditions of extreme cold and high radiation like those around Europa. Ahead for the team is to study the changes in amorphous ice as it makes the transition from the crystalline structure, using an instrument called VISION, which performs vibrational spectroscopy, a method that can reveal molecular structure, chemical bonding, and intermolecular interactions. 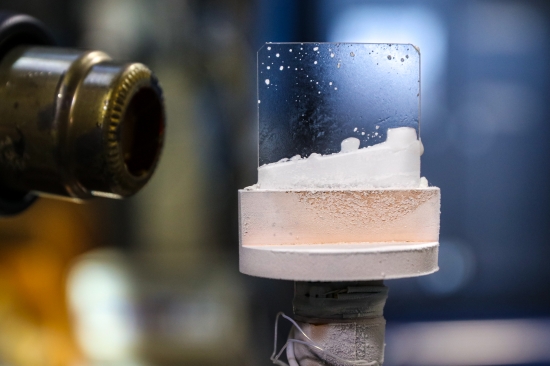 Image: Scientists created this exotic “outer space” ice by freezing a stream of heavy water (D2O) molecules on a sapphire plate that is cooled to about -414° F in a vacuum chamber. Credit: ORNL/Genevieve Martin.

How much of Europa’s surface is made up of amorphous ice? We may soon have a good indication. Murthy Gudipati is a senior research scientist at JPL:

“This information could help us better interpret the science data from the Europa Clipper spacecraft and also provide some clues about how water ice evolves in various parts of the Universe. With a launch date planned for 2024, the goal of the Europa Clipper mission is to assess Europa’s habitability by studying its atmosphere, surface, and interior, including liquid water beneath the icy crust that could potentially support life.”