You can blame H. G. Wells’ The Time Machine for my interest in the Earth’s far future. That swollen red Sun at the end of the novel created vivid ‘end of the world’ scenarios for me as a boy, and later I would learn that outer planets or moons around a G-class star might turn habitable once it became a red giant. But it would only be in the last few years that I learned how robust the investigations into white dwarf systems — the fate of a red giant — have become, and now we’re finding out not only that such stars can retain planets, but can conceivably create new ones through an emerging disk packed with the pulverized dust of remnant materials like asteroids. 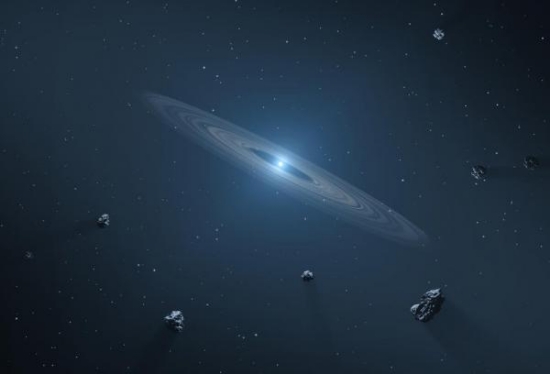 Jordan Steckloff (Planetary Science Institute, Tucson) has just published a short paper on the matter, looking at how white dwarf debris disks emerge. The disks seem to form only after ten to twenty million years following the end of the red giant phase. And a turbulent phase it is, with stars like the Sun losing a large proportion of their mass before they turn into a white dwarf. The dwarf itself is Earth-sized and only about half as massive as the star that gave birth to it.

The process of mass loss and collapse into a white dwarf exerts a destabilizing effect on those planets that have not already been swallowed up by the red giant (Mercury, Venus, and most likely Earth will be lost this way). Whether or not planets beyond a few AU of the star survive, their disrupted orbits can result in turmoil within the asteroid population of the system, with some of them falling toward the dwarf star, to be pulverized into dust by these gravitational interactions. Steckloff and team noticed the fact that a process of debris disk formation which ought to occur quickly takes shape only after the delay mentioned above. What is it that is holding back the formation of a debris disk for millions of years? The scientist explains:

“We found that this delay is a result of these young white dwarfs being extremely hot. So hot that any dust that forms from a tidally disrupted asteroid rapidly vaporizes and dissipates. We found that this dust only stops vaporizing after the white dwarf has had time to sufficiently cool down, to a surface temperature of approximately 27,000 degrees kelvin (48,000 degrees Fahrenheit). This temperature agrees with observations of these white dwarf systems; all dusty debris disks are found around white dwarfs cooler than this critical temperature.” 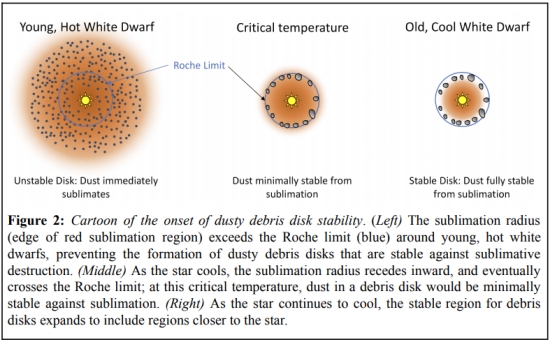 Image: This is Figure 2 from the paper. Credit: Steckloff et al.

Thus our own Solar System, several billion years down the road, should see the Sun enter its red giant phase and ultimately be trasformed into a white dwarf, with the result, according to Steckloff, that Jupiter will migrate outward, thoroughly disrupting the asteroid belt and sending enough of the asteroids close to the Sun to begin the formation of a dusty debris disk. While it is true that the formation process of a debris disk like this should favor hot young stars, whose planetary systems are more unstable, the dwarf star must cool first to the needed temperatures.

Steckloff’s material sublimation model shows the interplay of thermal and tidal forces within the regions around a white dwarf where dusty debris disks can form. The temperatures involved vary somewhat depending on the size of the white dwarf, with more massive stars forming disks at somewhat warmer temperatures. There is also the interesting twist that extremely cool white dwarfs may have more than one debris disk. We see this is a system tagged LSPM J0207+3331, which may be hosting disks formed from the disruption of two planetesimals.

This is the coldest, oldest white dwarf known with a dusty debris disk, according to the paper, and there appears to be a gap within the disk which can also be explained another way:

The apparent gap in this disk is curious and unexpected, and, analogous to protoplanetary disks, may point to the presence of a dense planet clearing a gap along its orbit from within the disk (as proposed for the SDSS J122859.93+104032.9 system; Manser et al. 2019) or a planet sitting outside the Roche limit opening a gap via resonant dynamics. Similar dynamical processes may be at work in dusty debris disks around white dwarfs and the ~3 Gyr cooling age of this white dwarf provides ample time for such dynamical processes to occur.

Whichever possibility is true, this system demonstrates that the environment around white dwarf stars appears to be a lively one. The paper gives us insight into how the physical processes at work restrict the formation of dusty debris disks to white dwarfs that have sufficiently cooled.

Next post: The Oort Cloud and Close Stellar Encounters