The Juno spacecraft swings by Ganymede today, coming within 1,038 kilometers of the largest moon of Jupiter. We have to look back over twenty years to see such a close approach to Ganymede, that one conducted by the Galileo probe in 2000. Juno seems to be one of those gifts that keeps on giving, rewarding us now with new data on Ganymede’s composition, tenuous ionosphere, magnetosphere and icy surface, likely a shell over an underlying ocean.

“Juno carries a suite of sensitive instruments capable of seeing Ganymede in ways never before possible. By flying so close, we will bring the exploration of Ganymede into the 21st century, both complementing future missions with our unique sensors and helping prepare for the next generation of missions to the Jovian system – NASA’s Europa Clipper and ESA’s [European Space Agency’s] JUpiter ICy moons Explorer [JUICE] mission.” 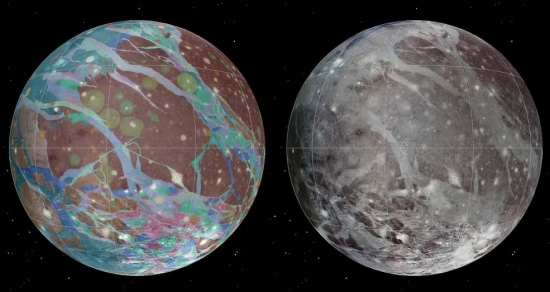 The closest approach occurs at 13:35 EDT (17:35 UTC), with the craft’s science instruments beginning collecting data some three hours earlier. Especially useful here will be the Ultraviolet Spectrograph (UVS) and Jovian Infrared Auroral Mapper (JIRAM) instruments, while the Microwave Radiometer (MWR) will draw information on the composition and temperature of the crust. Bolton again:

“Ganymede’s ice shell has some light and dark regions, suggesting that some areas may be pure ice while other areas contain dirty ice. MWR will provide the first in-depth investigation of how the composition and structure of the ice varies with depth, leading to a better understanding of how the ice shell forms and the ongoing processes that resurface the ice over time.”

The animation below gives a sense of Ganymede’s geology:

Remember that JUICE is scheduled for launch in 2022, with multiple flybys of Europa and Callisto planned before the spacecraft moves into orbit around Ganymede, so everything we learn today with Juno will provide additional planning fodder for the mission. JUICE will fly with ice-penetrating radar, an instrument called RIME (Radar for Icy Moon Exploration) that is capable of penetrating up to 10 kilometers of ice and reflecting off subsurface features. That should obviously come in handy not just on Ganymede but Europa and Callisto as well.

A radio occultation experiment is planned for the Juno flyby using the spacecraft’s X-band and Ka-band wavelengths as a probe of the moon’s ionosphere, where solar radiation excites stray gases to form detectable ions. When Juno moves behind Ganymede, the changes in frequency observed as the radio signals pass through the ionosphere will be detected at the Deep Space Network Canberra complex in Australia. A solid reading here would be useful as scientists try to learn more not only about Ganymede’s ionosphere but also its magnetosphere. Larger than the planet Mercury, Ganymede is the only moon in the Solar System to have its own magnetosphere, a region of charged particles that form a bubble around the small world.

This will be a busy week for Juno mission scientists, with the close pass of Ganymede followed less than 24 hours later with the 33rd science pass of Jupiter. Juno’s JunoCam imager should be able to take images of Ganymede at a resolution equivalent to the best returned by Voyager and Galileo, a set of imagery that can be scanned for changes over the four decade period. Of relevance here will be new craters as we try to learn more about impacts in the outer system.

Meanwhile, the Juno Stellar Reference Unit (SRU) navigation camera should collect images with a particular import, telling us something about the radiation environment at Ganymede. Heidi Becker (JPL) is Juno radiation monitoring lead:

“The signatures from penetrating high-energy particles in Jupiter’s extreme radiation environment appear as dots, squiggles, and streaks in the images – like static on a television screen. We extract these radiation-induced noise signatures from SRU images to obtain diagnostic snapshots of the radiation levels encountered by Juno.”

A third camera is the Advanced Stellar Compass, which will measure energetic electrons penetrating its shielding every quarter of a second. NASA points out that from the perspective of Juno, Ganymede will go from being a point of light to a visible disk and back to a point of light in a mere 25 minutes, moving past the moon at about 19 kilometers per second. The ensuing Jupiter close pass will occur at 58 kilometers per second. Fast times above the cloud tops.

Next post: When Will We See an Ice Giant Orbiter?