TOI 1231b: A Useful Temperate Sub-Neptune

The beauty of nearby M-dwarf stars for exoplanet research is the depth of transits. If we are fortunate enough to find a planet crossing the face of the star as seen from our observatory, the star’s small size means a larger portion of its light will be attenuated. As you would imagine, this makes planets easier to spot, but the other significant advantage is that we have greater capability at analyzing the planet’s atmosphere.

TOI-1231b certainly fits the bill, although it’s a bit of an anomaly in the TESS universe. The space observatory operates with a built in observational bias because the Science Processing Operations Center (SPOC) pipeline and the Quick Look Pipeline (QLP) that comb through TESS data on a 2-minute and 30 minute cadence respectively have to show two transits for the planet’s period to be determined. Factor in that most of the TESS sky coverage is observed for 28 days and you wind up in the majority of cases with detections of planets with orbital periods of less than 14 days.

TOI-1231b’s period is 24 days, a nice catch given these constraints. The planet is a temperate sub-Neptune whose host star, NLTT 24399, is roughly 88 light years from the Sun. Already lead author Jennifer Burt (JPL) and team have been able to measure both the radius and mass of the planet, with followup data from the Planet Finder Spectrograph (PFS) on the Magellan Clay telescope at Las Campanas Observatory (Chile), as well as Las Cumbres Observatory and the Antarctica Search for Transiting ExoPlanets. From these parameters it was possible to calculate the planet’s density.

The temperatures on this world are calculated at 330 K (60 degrees Celsius), making TOI-1231b one of the lowest temperature exoplanets yet found whose atmosphere can be studied through transmission spectroscopy. The star is bright in the near-infrared (NIR), suggesting it will be a useful target for the James Webb Space Telescope as well as Hubble. One of the paper’s co-authors will be using the latter to mount a new series of observations within the month. Co-author Diana Dragomir (University of New Mexico) describes the team’s findings thus far:

“The low density of TOI 1231b indicates that it is surrounded by a substantial atmosphere rather than being a rocky planet. But the composition and extent of this atmosphere are unknown. TOI1231b could have a large hydrogen or hydrogen-helium atmosphere, or a denser water vapor atmosphere. Each of these would point to a different origin, allowing astronomers to understand whether and how planets form differently around M dwarfs when compared to the planets around our Sun, for example. Our upcoming HST observations will begin to answer these questions, and JWST promises an even more thorough look into the planet’s atmosphere.” 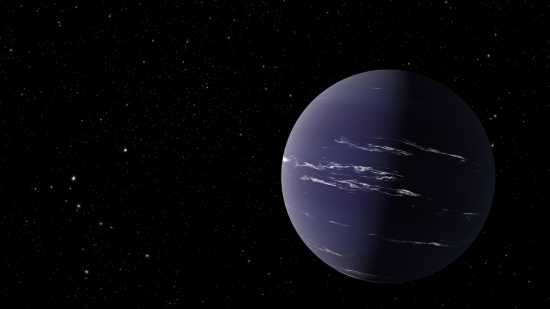 Image: An artist’s rendering of TOI-1231 b, a Neptune-like planet about 88 light years from Earth. Credit: NASA/JPL-Caltech.

One interesting aspect of this detection is the possibility of observing hydrogen and helium surrounding the planet because of its relatively low gravitational well and expected exposure to X-ray and ultraviolet radiation from the star. Moreover, there is only one other low-density temperate sub-Neptune, K2-18 b, currently in our catalog. It has temperatures in the 250-350 K range and a transmission spectrum that allows us to analyze its atmosphere, where evidence for water vapor has been found. Thus TOI 1231b should be useful as a check on how common water cloud formation in temperate sub-Neptunes may be.

All told, say the authors, “TOI 1231 b appears to be one of the most promising small exoplanets for transmission spectroscopy with HST and JWST detected by the TESS mission thus far.” A valuable find as we keep drilling down to analyze the atmospheres of ever smaller worlds, moving toward Earth-mass planets in the habitable zone.

The paper is Burt et al., “TOI-1231 b: A Temperate, Neptune-Sized Planet Transiting the Nearby M3 Dwarf NLTT 24399,” in process at The Astronomical Journal (preprint).

Next post: A Rapidly Growing Catalog of Fast Radio Bursts

Previous post: When Will We See an Ice Giant Orbiter?