As we learn more about how planetary systems form, it’s becoming accepted that a large number of planets are being ejected from young systems because of their interactions with more massive worlds. I always referred to these as ‘rogue planets’ in previous articles on the subject, but a new paper from Patricio Javier Ávila (University of Concepción, Chile) and colleagues makes it clear that the term Free Floating Planet (FFP) is now widespread. A new acronym for us to master!

There have been searches to try to constrain the number of free floating planets, though the suggested ranges are wide. Microlensing seems the best technique, as it can spot masses we cannot otherwise see through their effect on background starlight. Of these, the estimates come in at around 2 Jupiter-mass planets and 2.5 terrestrial-class rocky worlds per star that have been flung into the darkness. This is a vast number of planets, but we have to be wary of mass uncertainties, as the cut-off between planet and brown dwarf (usually around 13 Jupiter masses) comes into play. 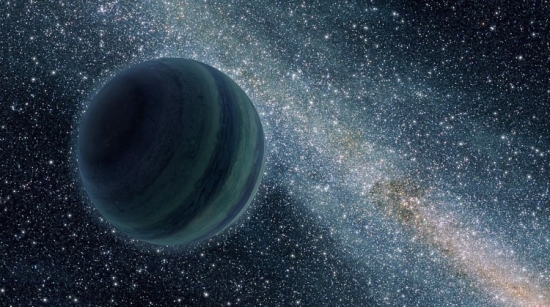 Any chance for life on a world like this? It’s hard to see how unless it’s something exotic indeed, but it’s Friday, so let’s play around with the idea. A major paper on rogue worlds is a 1999 discussion in Nature by David Stevenson (Caltech), which assumes a hydrogen-rich atmosphere. I’m just going to pull this out of the abstract before moving on to the Ávila paper:

Pressure-induced far-infrared opacity of H2 may prevent these bodies from eliminating internal radioactive heat except by developing an extensive adiabatic (with no loss or gain of heat) convective atmosphere. This means that, although the effective temperature of the body is around 30 K, its surface temperature can exceed the melting point of water. Such bodies may therefore have water oceans whose surface pressure and temperature are like those found at the base of Earth’s oceans. Such potential homes for life will be difficult to detect.

To say the least. Let’s also note a later paper by Steinn Sigurðsson and John Debes that has shown that among terrestrial class planets ejected from their stars, a good number may retain a lunar-sized moon. Citations for both these papers are below.

But let’s think bigger. Ávila and colleagues go after Jupiter-sized worlds with large, terrestrial-sized moons (far larger than any we see in our Solar System, where Ganymede, larger than Mercury but much smaller than Earth, reigns supreme). They model the chemical composition and evolution of CO2 and water in an attempt to discover the kind of atmosphere that would allow liquid water on the surface. CO2 is found to produce more effective atmospheric opacity (governing atmospheric absorption) than Stevenson’s choice of molecular hydrogen.

…to the best of our knowledge, there are no detailed models of the chemical evolution of the atmosphere of a moon orbiting an FFP. Within this context, we introduce here an atmospheric model to tackle this limitation. We assume that in the absence of radiation from a companion star, the tidal and the radiogenic heating mechanisms represent the main sources of energy to maintain and produce an optimal range of surface temperatures.

The authors simulate the atmosphere of an Earth-sized moon in an eccentric orbit around a gas giant, analyzing its thermal structure and determining the mechanisms that can keep it warm. The assumption is that carbon dioxide accounts for 90% of the moon’s atmosphere. The model relies on radiogenic heating along with tidal factors as the main energy sources while invoking an atmosphere under changing conditions of cosmic ray ionization, chemistry, pressure and temperatures.

In a setting like this, the cosmic-ray ionization rate (CRIR) drives chemistry in the atmosphere. A bit more on this:

Due to the absence of impinging radiation, the time-scale of water production is driven by the efficiency of cosmic rays in penetrating the atmosphere. Higher CRIRs reduce the water formation time-scale when compared to low-CRIR models, implying that they play a key role in the chemical evolution, by enhancing the chemical kinetics. However, due to the attenuation of cosmic rays, in the lower layers of the atmosphere, the water production is also affected by the density structure, that determines the integrated column density through the atmosphere. This causes an altitude-dependent abundance of water as well as of some of the other chemical species, as CO, H2 and O2.

The authors’ model assumes an initial 10% molecular hydrogen and measures changes depending on atmospheric pressure, semi-major axis and eccentricity, the latter generating tidal heating. In the best scenario, we wind up with an amount of water on the surface of the moon that is about 10,000 times smaller than the volume of Earth’s oceans, but 100 times larger than found in Earth’s atmosphere. Thus we have a conceivable way to keep water a liquid on the surface, offering the possibility of prebiotic chemistry:

“Under these conditions, if the orbital parameters are stable to guarantee a constant tidal heating, once water is formed, it remains liquid over the entire system evolution, and therefore providing favourable conditions for the emergence of life.

Keeping that orbit eccentric enough to produce the needed tidal forces is a challenge. The authors’ research indicates that while moons around ejected gas giants may exist up to 0.1 AU from the planet, closer orbits in the range of ≲ 0.01 AU are more probable (Jupiter’s largest moons are within 0.01 AU). Is a single moon in this configuration not going to circularize its orbit, or can earlier orbital resonances survive the ejection? A good science fiction writer should have a go at this scenario to see what’s possible.