A Visualization of Galactic Settlement

When the question of technosignatures at Alpha Centauri came up at the recent Breakthrough Discuss conference, the natural response was to question the likelihood of a civilization emerging around the nearest stars to our own. We kicked that around in Alpha Centauri and the Search for Technosignatures, focusing on ideas presented by Brian Lacki (UC-Berkeley) at the meeting. But as we saw in that discussion, we don’t have to assume that abiogenesis has to occur in order to find a technosignature around any particular star.

Ask Jason Wright (Penn State) and colleagues Jonathan Carroll-Nellenback and Adam Frank (University of Rochester) as well as Caleb Scharf (Columbia University), whose analysis of galaxies in transition has now produced a fine visual aid. Described in a short paper in Research Notes of the AAS, the simulation makes a major point: If civilizations last long enough to produce star-crossing technologies, then technosignatures may be widespread, found in venues across the galaxy.

The simulation depicts the expansion of a technological civilization through the Milky Way, created along lines previously described in the literature by the authors (citation below). What we are looking at is the transition between a Kardashev Type II civilization (here defined as a species using its technology in a significant fraction of the space around the host star), and a Type III, which has spread throughout the galaxy. Wright has argued in earlier work that, contra Sagan and others, this might be a fast process considering the motions of stars themselves, which would overcome the inertia of slower growing settlements and boost expansion rates. 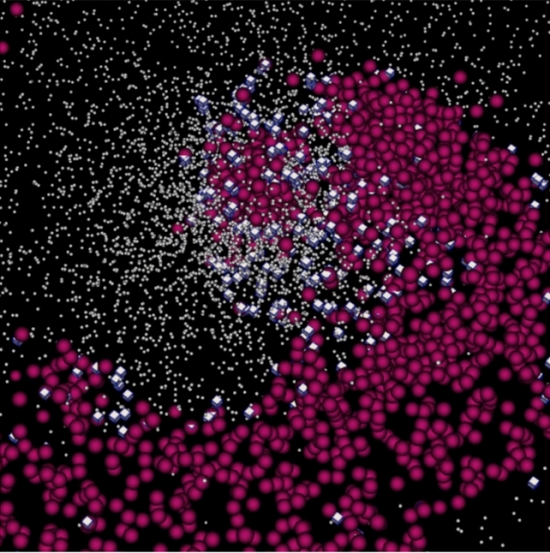 Image: This is Figure 1 from the paper. Caption: A snapshot of the animation showing the settlement of the galaxy. White points are unsettled stars, magenta spheres are settled stars, and white cubes represent a settlement ship in transit. The spiral structure is due to galactic shear as the settlement wave expands. The full, low-resolution video is available in the HTML version of this research note, and a high resolution version can be found archived at ScholarSphere (see footnote 7). Credit: Wright et al.

And here is the animation, also available at https://youtu.be/hNMgtRf0GOg.

Issues like starship capabilities and the lifetime of colonies come into play, but the striking thing is how fast galactic settlement occurs and how the motions of stars factor into the settlement wave. Naturally, the parameters are everything, and they’re interesting:

All told, the simulation covers 1 billion years, and about it, the authors say that:

…it shows how rapidly expansion occurs once the settlement front reaches the galactic bulge and center. The speed of the settlement front depends strongly on the ratio of the maximum ship range to the average stellar separation. Here, we deliberately set this ratio to near unity at the stellar density of the first settlement, so the time constant on the settlement growth starts out small but positive. Eventually, the inward-moving part of the front encounters exponentially increasing stellar densities and accelerates, while the outward-moving part stalls in the rarer parts of the galaxy. Note that at around 0:33 a halo star becomes settled, and at 0:35 it settles a disk star near the top of the movie and far from the other settlements. This creates a second settlement front that merges with the first…

It comes as no surprise that the central regions of galaxies, thick with stars, are places that favor interstellar migration. Can a technological culture survive against ambient conditions in a galactic bulge? If so, these regions are logical SETI targets, and perhaps the most likely to yield a technosignature. The idea has synergy with other observations we are already interested in making, as for example studies of the supermassive black hole at galactic center.

So even slow — very slow — ships will fill a galaxy.

The paper is Wright et al., “The Dynamics of the Transition from Kardashev Type II to Type III Galaxies Favor Technosignature Searches in the Central Regions of Galaxies,” Research Notes of the AAS Vol. 5, No. 6 (June 2021). Abstract. The 2019 paper is Carroll-Nellenback et al., “The Fermi Paradox and the Aurora Effect: Exo-civilization Settlement, Expansion, and Steady States,” Astronomical Journal Vol. 158, No. 3 (2019). Abstract. This earlier paper is a storehouse of references and insights into the likelihood of interstellar settlement and spread.