Mixing and Growth in the Sun’s Protoplanetary Disk

The Allende meteorite is the largest carbonaceous chondrite meteorite ever discovered. Falling over Mexico’s state of Chihuahua in 1969 and breaking up in the atmosphere, the object yielded over two tons of material that have provided fodder for scientists interested in the early days of the Solar System. The meteorite contains numerous calcium-aluminum-rich inclusions (CAIs), which are considered to be the first kind of solids formed in the system 4.5 billion years ago.

Samples of the Allende meteorite are considered ‘primitive,’ which in this parlance means unaffected by significant alteration since formation. Now a team led by Tom Zega (University of Arizona Lunar and Planetary Laboratory) has gone to work on a dust grain from this object, in order to simulate the conditions under which it formed in the Sun’s protoplanetary disk. The grain was drawn from one of several CAIs discovered in the Allende meteorite sample. Analysis of the sample’s chemistry and crystal structure provides a look at the conditions that produced it.

The work appears in The Planetary Science Journal and is, according to Zega, something of a ground-breaker:

“As far as we know, our paper is the first to tell an origin story that offers clues about the likely processes that happened at the scale of astronomical distances with what we see in our sample at the scale of atomic distances.” 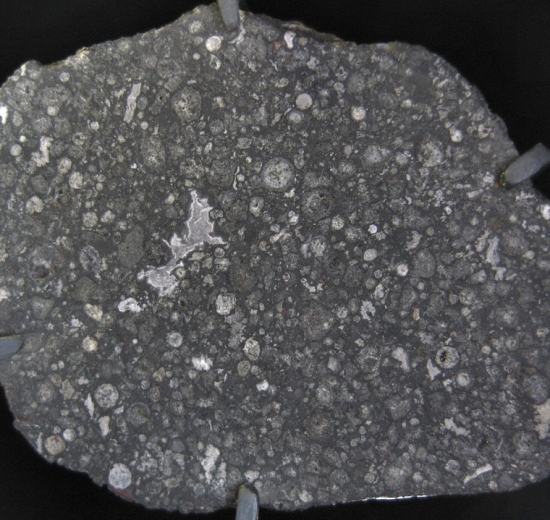 Image: A slice through an Allende meteorite reveals various spherical particles, known as chondrules. The irregularly shaped “island” left of the center is a calcium-aluminum rich inclusion, or CAI. The grain in this study was isolated from such a CAI. Credit: Shiny Things/Wikimedia Commons.

To examine the CAI, the researchers used a scanning transmission electron microscope located at the University of Arizona as well as a twin instrument at the Hitachi factory in Hitachinaka, Japan. The microstructure of the sample was examined at varying scales down to the level of individual atoms, in a process co-author Venkat Manga (UA) likens to opening a book recording what happened 4.567 billion years ago in the nebula that gave birth to the Sun.

It’s a book with an intriguing plot. The investigation revealed types of minerals called spinel and perovskite. Examined at the level of atomic-scale crystal structure, the sample creates a puzzle, with Zega noting that the chemical pathways that produced it seem to contradict current theories on the processes at work in protoplanetary disks. I like the way Zega puts this: “Nature is our lab beaker, and that experiment took place billions of years before we existed, in a completely alien environment.”

The paper recounts the team’s effort to create new formation models that could produce the sample CAIs found in the Allende object, simulating their chemistry and cutting across the fields of materials and mineral science as well as microscopy in the kind of multidisciplinary challenge that the study of planetary systems involves. Just how wide-ranging such work can be is made clear in the paper:

Our motivation is to understand the micro- and atomic-scale structure of the materials reported herein, which defy existing thermochemical models of the early solar protoplanetary disk. To this end, we combine state-of-the-art nanoscale to atomic-scale characterization of several CAIs with quantum-mechanical, thermodynamic modeling and dust-transport calculations to explain their origin. We propose that such an integrated approach is an important step toward a more comprehensive paradigm for reverse engineering the microstructures observed within primitive meteorites and extracting from them the thermal and dynamic histories that they have recorded.

The history of the particle at the heart of the model is worked out in detail, showing us a dynamic journey moving from a region of the disk near Earth’s current orbit to close proximity to the Sun and later transport to cooler regions further out. The sample winds up being part of an asteroid which, as it fragmented, became the parent body of meteorites like the Allende object. Crucial here is the history of movement and mixing within the disk, which challenges earlier, more static models.

It is clear from the above observations and computational effort that some assemblages within the oldest solar system solids deviate from long-standing assumptions and, rather than remaining in contact with the same parcel of gas in a monotonically cooling system, are admixed into other regions, possibly warming once or multiple times before cooling down in the disk. Indeed, this mixing and transport are necessary for the preservation of CAIs for millions of years and the delivery of CAI-like grains to outer regions of the solar nebula to be accreted by comets as revealed by the Stardust mission (Brownlee et al. 2006).

Image: Illustration of the dynamic history that the modeled particle could have experienced during the formation of the solar system. Analyzing the particle’s micro- and atomic-scale structures and combining them with new models that simulated complex chemical processes in the disk revealed its possible journey over the course of many orbits around the sun (callout box and diagram on the right). Originating not far from where Earth would form, the grain was transported into the inner, hotter regions, and eventually washed up in cooler regions. Credit: Heather Roper/Zega et al.

The authors say that their work is part of a longer-term effort to “deconstruct CAIs phase by phase,” so we should be hearing more about these methods. It will be interesting to see how asteroid sample return missions provide further insights.

We are digging here into the nature of planet formation as we try to understand how material moves around inside a protoplanetary disk. These are presumably processes common to the emerging systems we also see with the Atacama Large Millimeter/submillimeter Array (ALMA), whose images show the earliest stages of stellar system growth. But examining that commonality with a critical eye will be part of the continuing study of evolving disks and the movement of materials within them.

Next post: A Chronological Look at a Transiting Earth