A Long Period Super-Earth around a Nearby Star

Nu2 Lupi is a G-class star not all that far away in astronomical terms (48 light years) in the constellation Lupus, its proximity verified by parallax measurements and firmed up by the Hipparcos satellite. This is one of the closest G-class stars to our own, and it’s a fast mover in other ways, with a high radial velocity. Its age is estimated at roughly 12 billion years, making it one of the oldest stars near our system. HARPS spectrograph data pulled up three planets here in 2019, two of them later found to transit.

And now we have, unexpectedly, a third transit. The surprising nature of the third relates to the distance of the third planet from the star. The two inner worlds, with masses between Earth’s and Neptune’s, take 12 and 28 days to orbit Nu2 Lupi. The third takes 107 days, far enough out that a transit seemed unlikely. The ratio of the diameter of the star to the diameter of the orbit comes into play in determining the probability of a transit.

We have the European Space Agency’s CHEOPS mission (CHaracterising ExOPlanet Satellite) to thank for the surprise discovery, allowing a tight look at the third world. For in combination with radial velocity data, the transit information allows scientists to determine the planet’s density and composition. Nu2 Lupi d turns out to be 2.5 times the radius of Earth and about 9 times its mass. While the inner world at Nu2 Lupi is evidently rocky, the outer two are enveloped by hydrogen and helium atmospheres, with a quarter of the mass of each being composed of water in the form of either high-pressure ice or high-temperature steam. 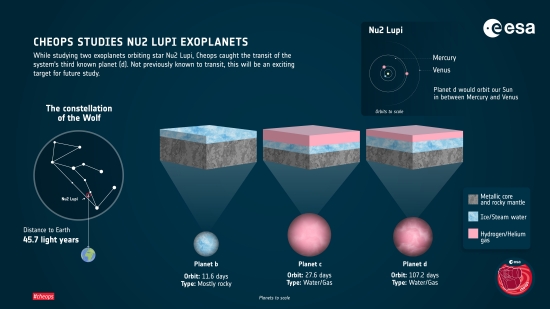 Image: This infographic reveals the details of the Nu2 Lupi planetary system. This bright, Sun-like star is located just under 50 light-years away from Earth in the constellation of Lupus (the Wolf), as shown to the left of the frame, and is known to host three planets (named ‘b’, ‘c’ and ‘d’, with the star deemed to be object ‘A’). The relative sizes, orbital periods, and possible compositions of these three planets are depicted to the centre and lower right of the frame, while planet d’s comparative position within our Solar System is shown to the upper right (as defined by the amount of incident light it receives from its star, Nu2 Lupi). Credit: ESA.

Nu2 Lupi d turns out to be a useful find, as co-author David Ehrenreich (University of Geneva) explains:

“Due to its relatively long period, the amount of stellar radiation reaching the planet is mild in comparison to many other discovered exoplanets. The less radiation a planet receives, the less it changes over time. Therefore, a planet with a long period could have retained more information about its origin. Since its bright host star is quite close to us, it is easier to study. This makes it a golden target for future study, with no known equivalent.”

I think what Ehrenreich is getting at is the fact that Nu2 Lupi is a G-class star, making its proximity to Earth and its transiting worlds of great interest — the authors point out that this is the first time a planet with an orbital period of over 100 days has been discovered in transit around a star bright enough to be a naked eye object. We can imagine future missions using transmission spectroscopy to analyze its atmosphere.

But let’s look at the paper’s further explanation, for planet formation models are also in play:

With regard to the derived amounts of gas, planetary atmospheric evolution calculations indicate that the innermost planet b was subject to significant atmospheric loss, while planets c and d did not suffer strong evaporation… The two outer planets are indeed sufficiently massive and far away from the host star to be only little affected by mass loss throughout their evolution. Therefore, the current low gas content returned by our internal structure modelling for these two planets is likely of primordial origin.

Core accretion models of planet formation, oft discussed in these pages, see planets accreting large amounts of gas when they reach a critical mass, generally cited as being around 10 times the mass of Earth. As this relates to Nu2 Lupi:

The structure of the two outer planets, as observed today, being likely primordial, these two objects provide a very important anchor for planet formation models, as they indicate that neither of them reached the critical mass during their formation. These two planets, by giving access to both the core mass and gas-to-core ratio for two objects in the same system will provide strong constraints on the understanding of the formation of sub-critical planets. Since the presence of large gas envelopes hinders habitability, the ν2 Lupi system, with its two sub-critical outer planets, also provides an interesting case study for numerical models targeting the emergence of habitable worlds.

Next post: TESS: How Many Planets Are We Missing?