TESS: How Many Planets Are We Missing?

Many of the planet-hosting stars being identified by TESS, the Transiting Exoplanet Survey Satellite, may actually be binaries. Unless examined closely, a pair of stars can appear as a single object, requiring high resolution instrumentation to separate into its component parts. As it applies to exoplanet research, this is a problem, for TESS operates by the transit method, tracking the change in a star’s light curve as a planet crosses the face of the star.

Light curves yield precious information, but the presence of a second star unknown to researchers can obscure smaller, rocky worlds, just the kind of object we’d like to eventually identify as an Earth 2.0. The problem seems to be wider than we have realized, given that about half of all stars exist in binary systems. New work has put some numbers on the problem. Conducted with data from the Gemini Observatory and the WIYN 3.5-meter telescope at Kitt Peak by NASA Ames researchers, the study examined TESS host stars using a technique known as speckle imaging.

The method works by combining a series of observations taken at rapid intervals, making it possible to eliminate atmospheric effects like those that cause stars in the night sky to twinkle. Two imaging instruments — named Alopeke and Zorro — came into play in the Gemini work, identical units mounted on Gemini North (Hawai‘i) and Gemini South (Chile) respectively. Both are based on the original Differential Speckle Survey Instrument (DSSI) and are permanently mounted.

At the Kitt Peak site where the WIYN instrument is located, the imaging was done using the NN-EXPLORE Exoplanet and Stellar Speckle Imager. Hundreds of TESS host stars came under scrutiny in this work, all of them nearby (as befits the TESS mission concept), with the result that fully 73 of them observed by Gemini turned out to be binary systems, while an additional 18 binary stars turned up using the WIYN instrument.

The team also noted that around single stars, TESS found exoplanets in a wide range of sizes, whereas around the binary systems, only large planets had been found. Katie Lester of NASA’s Ames Research Center led the work:

“We have shown that it is more difficult to find Earth-sized planets in binary systems because small planets get lost in the glare of their two parent star[s]… Astronomers need to know whether a star is single or binary before they claim that no small planets exist in that system. If it’s single, then you could say that no small planets exist. But if the host is in a binary, you wouldn’t know whether a small planet is hidden by the companion star or does not exist at all. You would need more observations with a different technique to figure that out.” 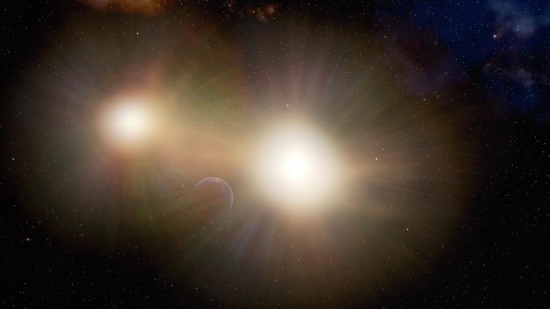 Image: This illustration depicts a planet partially hidden in the glare of its host star and a nearby companion star. After examining a number of binary stars, astronomers have concluded that Earth-sized planets in many two-star systems might be going unnoticed by transit searches, which look for changes in the light from a star when a planet passes in front of it. The light from the second star makes it more difficult to detect the changes in the host star’s light when the planet passes in front of it. Credit: International Gemini Observatory/NOIRLab/NSF/AURA/J. da Silva.

The planet-hosting binary stars the team uncovered had an average separation of about 100 AU, while binary systems without planets are typically separated by about 40 AU, perhaps pointing to lower rates of planet formation around close binaries. By way of comparison to our closest neighbors, Centauri A and B, which appear as a single bright star with an apparent magnitude of −0.27 to the naked eye, are separated in their elliptical orbit by 35.6 AU at their furthest point and 11.2 AU (about Saturn’s distance from the Sun) at the closest, orbiting a common barycenter with a period of 79.91 years.

All told, the team observed 517 stars hosting a TESS Object of Interest (TOI) using speckle interferometry methods led by Steve Howell (NASA Ames), who is a co-author of the resulting paper. 29 companions turned up around false positive TOIs. The paper concludes:

Our results are consistent with past studies…in showing that the binary exoplanet host period distribution is narrower and peaks at a larger value than that of field binaries, but our lack of very close companions (< 100 AU) is less dramatic than found by these previous studies due to our improved angular resolution and sensitivity to faint companions. Furthermore, our sample clearly shows the observational bias against detecting small planets in transit surveys like TESS due to the third light from a stellar companion. Both the host star multiplicity and this observational bias must be taken into account when calculating the occurence rates of Earth-sized planets...We did not find any additional correlations in the properties of the planets or companions in our sample.

The authors add that they are currently monitoring exoplanet host binaries with shorter periods to determine their orbital parameters, hoping to test each system for dynamical stability and potential for habitable planets.

Previous post: A Long Period Super-Earth around a Nearby Star