Demonstrating once again the role amateurs can play in supporting ongoing observations, a new project linking NASA and the American Association of Variable Star Observers is being launched. Exoplanet Watch isn’t about discovering new transiting planets (although the potential is there) as much as tightening up the information we already have about planets currently under investigation. The idea is to help professional observers know when to look, which allows them to maximize precious observing time on instruments that are always in high demand.

Transit timing is the key, and the fact is that for many known exoplanets, knowing exactly when to look is problematic. Rob Zellem (JPL) is project lead for Exoplanet Watch:

“If there’s a 15-minute under-estimate of when a transit will occur, that’s an extra 15 minutes I have to build into my observing scenario. Time on big telescopes, especially space telescopes, is very, very precious. If you’re observing a lot of planets, [15 minutes] could add up to a substantial amount of time. Any time wasted means less science will be done with that telescope.”

Hubble’s recent difficulties only underscore the problems in equipment availability for this kind of work in space, but amateurs working with equipment down to 6-inch telescopes (supplemented with a digital camera attachment) can make a difference. Citizen scientists can observe transits, reduce and analyze the data, and upload results to the AAVSO’s Exoplanet Database, to be shared with the scientific community. After analysis via Exoplanet Watch, the results will be posted on the project’s website. 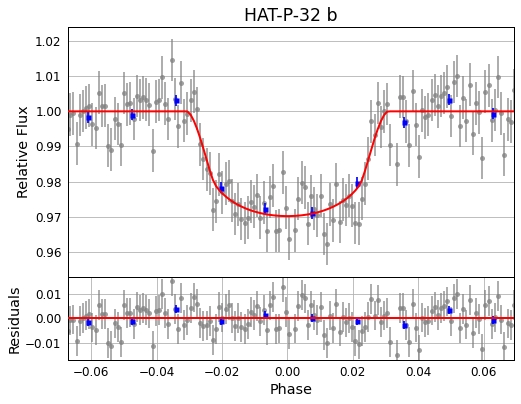 Image: An example lightcurve of the transiting hot Jupiter exoplanet HAT-P-32b as observed with a 6-inch (15.24-cm) MicroObservatory telescope in Tucson, Arizona. A transiting exoplanet periodically passes in front of its host star, causing the star to dim (and effectively casting a tiny shadow on the Earth!). The amount of light blocked by the planet tells us directly the size of the planet relative to its host star. Despite this target being relatively dim (V-mag = 11.44) and imprecise guiding on the target (the target drifted on the focal plane by ~100 pixels over the course of the observation), a single 6-inch telescope can achieve high precision transit observations. Credit: Zellem et al. 2020; citation below.

The heart of the process is the automated data pipeline called Citizen Initiated Transit Information Survey Enabling NASA Science (CITISENS), which pulls information from the AAVSO and calculates new ephemerides and orbital periods for each target submitted, tying in with data collected from the NASA Exoplanet Archive. Data input will be through the project’s EXOTIC (Exoplanet Transit Interpretation Code) software, which converts the information into the light curves at the heart of transit work.

While refined transit timing is a key objective of Exoplanet Watch, the project will also involve potential new discoveries as transit-timing variations reveal the presence of additional planets in a given exoplanet system. Newly observed planets can be tracked, helping in the confirmation process, while stellar variability, which can play havoc with a transit signal, can be monitored through an ever expanding dataset.

This is another win for amateurs with even modest equipment who want to make a contribution to exoplanet science. For background, the defining paper on Exoplanet Watch is Zellem et al., “Utilizing Small Telescopes Operated by Citizen Scientists for Transiting Exoplanet Follow-up,” Publications of the Astronomical Society of the Pacific, Volume 132, Issue 1011, id.054401 (May, 2020), 22 pp. (abstract).