We could do with more information about how ice behaves on a gas giant’s moon. We’ll need this knowledge to understand the behavior of crustal ice on places like Europa and Enceladus, where oceans may provide sub-surface venues for life. One approach into the subject is to look at ice right here on Earth; specifically, the Antarctic ice shelves. A new study out of NASA’s Goddard Space Flight Center applies a model based on Antarctic data to the fractured south pole of Enceladus, probing tidally driven stress and seismic activity within an ice shell.

We assume that tidal stresses produced by the moon’s interactions with Saturn, as well as the planet’s larger moons, keep the interior of Enceladus warm, while at the same time producing cracks and accounting for the geysers of water vapor Cassini found erupting from the so-called ‘Tiger Stripes’ (fractures) at the southern pole. The tides of Enceladus must be massive, and learning about the seismic activity they induce offers a key to the movement of the ice. 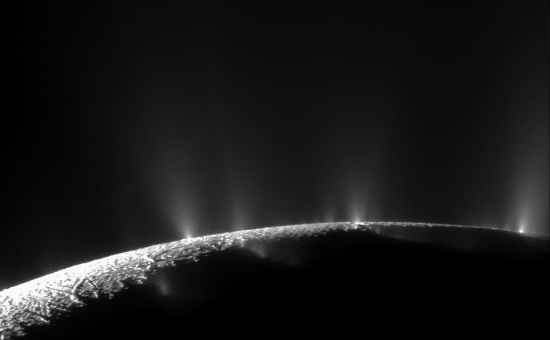 Future lander missions will benefit from knowing where and when icequakes occur on Enceladus. Led by Kira Olsen (NASA GSFC), the research effort described in the Journal of Geophysical Research: Planets focuses on data collected by seismometers deployed along Antarctica’s Ross Ice Shelf between 2014 and 2016, with an eye toward examining the tensile strength of the ice and the stresses on it. The researchers compared these data with satellite imagery of the same area.

They found that most icequakes on the Ross Ice Shelf happened as large rifts in the ice pulled apart, which occurs in conditions of falling tides. The team used the Antarctic data to produce models of seismic activity on Enceladus, having observed that “seismic activity at the Antarctic rifts is sensitive to both the amplitude and the rate of tensile stress across the rifts.”

The paper makes the case that the similarities between Antarctica and Enceladus are strong, homing in on a pair of interior, parallel fractures in the central part of the Ross Ice Shelf:

These internal rifts, named WR4 and WR6 (for Western Ross rifts 4 and 6; e.g., Walker et al., 2013), exist within a geophysical environment closely analogous to the TSF(Tiger Stripe Fractures) within the Enceladean icy shell. Physical similarities include (1) the Antarctic rifts are concentrated regions of deformation within the ice shelf, as are the TSF within Enceladus’ ice shell, (2) the Antarctic rifts undergo daily cycles of tidal deformation, similar in time scale to the tidal cycle that the TSF undergo throughout an Enceladean orbit (∼33 h), (3) the Antarctic rifts share similar geometries with the TSF (Table 1), and (4) fracture mechanics and seismicity generation is expected to be similar between the Antarctic and Enceladean environments.

The authors combined the Antarctic data with calculated stress values along Enceladus’ Tiger Stripes to predict seismic-activity levels along the ice-shell fractures. The result: Seismic activity on Enceladus should peak when the moon is 90°–120° past the closest approach in its orbit around Saturn, with seismic activity levels decreasing by about 50 percent during the last 180° of the orbit. The activity along the cracks, according to the model, should not be massive, but rather a series of small movements and fractures producing sustained stress on the ice, consistent with our observations of plume eruptions at the Tiger Stripes, which tend to be discrete rather than simultaneous ‘curtain eruptions’ along an extended fracture segment. 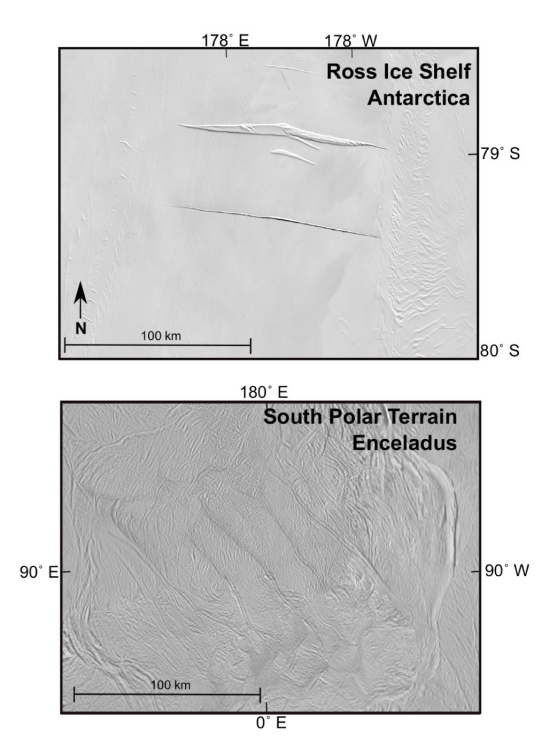 Image: A satellite image of the research study site on the Ross Ice Shelf in Antarctica (top) shows two rifts in the ice from rising and falling tides. Similarly sized “Tiger Stripe fractures” crease the ice in Enceladus’ South Polar Terrain, in an image captured by the Cassini Imaging Team. Also from figure 1 of the new study. Credit: AGU/ JGR: Planets.

A useful approach, according to the authors, would be for any future mission to Enceladus to place seismometers within 10 kilometers of these fractures. For now, while Europa is in our thinking with the upcoming Europa Clipper and JUICE missions, no Enceladus missions are in the works. But the scientists see their model offering insights into other icy moons:

Though we focus this study on Enceladean rifts, the relationship that we observed at the Ross Ice Shelf rifts between tensile stress, stretching rate, and seismic activity could be applicable to tidally forced seismicity in other planetary settings. The key input needed would be robust models of stress evolution through an orbital cycle at the fracture locations of interest. Future work applied to Titan would be especially insightful, given the collection of on-ice seismic data planned as part of the Dragonfly mission. Observation and study of the energy generated by icequakes will be one of the primary ways such missions to icy worlds advance our understanding of a range of scientific goals, from better understanding tidal tectonics, surface deformation, cryovolcanism, and material properties, to seismically probing the structure of the ice and sub-ice interior. Our study demonstrates the utility of even a single seismograph for these future missions.

The paper is Olsen et al., “Projected seismic activity at the tiger stripe fractures on Enceladus, Saturn, from an analog study of tidally modulated icequakes within the Ross Ice Shelf, Antarctica,” JGR: Planets 21 May 2021 (full text).