Near-Earth Asteroid Scout (NEA Scout) is a CubeSat mission designed and developed at NASA’s Marshall Space Flight Center in Huntsville and the Jet Propulsion Laboratory in Pasadena. I’m always interested in miniaturization, allowing us to get more out of a given payload mass, but this CubeSat also demands attention because it is a solar sail, the trajectory of whose development has been a constant theme on Centauri Dreams.

And while NASA has launched solar sails before (NanoSail-D was deployed in 2010), NEA Scout moves the ball forward by going beyond sail demonstrator stage to performing scientific investigations of an asteroid. As Japan did with its IKAROS sail, the technology goes interplanetary. Les Johnson (MSFC) is principal technology investigator for the mission:

“NEA Scout will be America’s first interplanetary mission using solar sail propulsion. There have been several sail tests in Earth orbit, and we are now ready to show we can use this new type of spacecraft propulsion to go new places and perform important science. This type of propulsion is especially useful for small, lightweight spacecraft that cannot carry large amounts of conventional rocket propellant.” 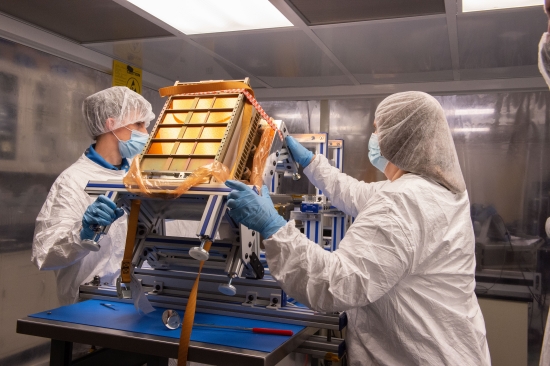 The spacecraft, one of several secondary payloads, has been moved inside the Space Launch System (SLS) rocket that will take it into space on the Artemis 1 mission, an uncrewed test flight. Artemis 1 will be the first time the SLS and Orion spacecraft have flown together (the previous launch was via a Delta IV Heavy). NEA Scout, which will deploy after Orion separates, has been packaged and attached to an adapter ring connecting the SLS rocket and Orion.

Once separated from the launch vehicle, NEA Scout will deploy a thin aluminized polymer sail measuring 85 square meters (910 square feet). In terms of sail deployment, we can think of the mission as part of a continuum leading to Solar Cruiser, which will feature a sail 16 times larger when it launches in 2025. Deployment will be via stainless steel alloy booms. Near the Moon, the spacecraft will perform imaging instrument calibration and use cold gas thrusters to adjust its trajectory for a Near-Earth Asteroid. The solar sail will provide extended propulsion during the approximately two year cruise to destination. The final target asteroid has yet to be selected. 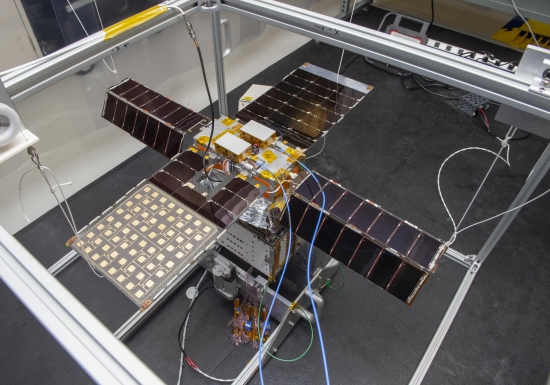 The pace of innovation in miniaturization is heartening. I note this from a 2019 conference paper describing the final design and the challenges in perfecting the hardware (citation below):

The figurative explosion in CubeSat components for low earth orbital (LEO) missions proved that spacecraft components could be made small enough to accomplish missions with real and demanding science and engineering objectives. Unfortunately, these almost-off-the-shelf LEO components were not readily usable or extensible to the more demanding deep space environment. However, they served as an existence proof and allowed the NEA Scout spacecraft engineering team to innovate ways to reduce the size, mass, and cost of deep space spacecraft components and systems for use in a CubeSat form factor. 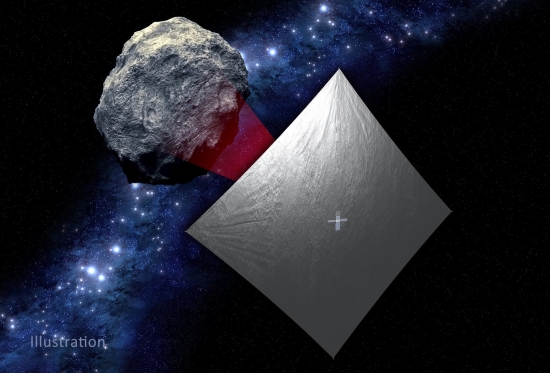 Image: Illustration of NEA Scout with the solar sail deployed as it flies by its asteroid destination. Credit: NASA.

At destination, NEA Scout is to perform a sail-enabled low-velocity flyby at less than 30 meters per second, with imaging down to less than 10 centimeters per pixel, which should enlarge our datasets on small asteroids, those measuring less than 100 meters across. Says principal science investigator Julie Castillo-Rogez (JPL):

“The images gathered by NEA Scout will provide critical information on the asteroid’s physical properties such as orbit, shape, volume, rotation, the dust and debris field surrounding it, plus its surface properties.”

The more we learn about small asteroids, the better, given our need to track trajectories and potentially change them if we ever find an object on course to a possible impact on Earth.

The presentation on NEA-Scout is Lockett et al., “Lessons Learned from the Flight Unit Testing of the Near Earth Asteroid Scout Flight System,” available here.

Next post: Carbon Isotopes as Clues to a Young Planet’s Formation