Our recent discussion about Europa (Europa: Below the Impact Zone) has me thinking about those tempting Galilean moons and the problems they present for exploration. With a magnetic field 20,000 times stronger than Earth’s, Jupiter is a radiation generator. Worlds like Europa may well have a sanctuary for life beneath the ice, but exploring the surface will demand powerful radiation shielding for sensitive equipment, not to mention the problem of trying to protect a fragile human in that environment.

Radiation at Europa’s surface is about 5.4 Sv (540 rem), although to be sure it seems to vary, with the highest radiation areas being found near the equator, lessening toward the poles. In human terms, that’s 1800 times the average annual sea-level dose. Europa is clearly a place for robotic exploration rather than astronaut boots on the ground.

Jupiter offers up an environment where the solar wind, hurling electrically charged particles at ever-shifting velocities, interacts with the powerful magnetosphere, stretching it out almost 1000 kilometers away from the Sun. It’s essential that we learn more about the behavior of the magnetic fields generated by gas giants, and on that score new work out of Goddard Space Flight Center offers some insight. GSFC’s Yasmina Martos and team have been using the inner Galilean moon, Io, as a probe, studying what sets off one type of radio emissions known to emanate from Jupiter.

Io’s volcanoes have been observed since the first Voyager flyby, driven by internal heat as the moon experiences the gravitational pull not only of Jupiter but neighboring large moons. Gas and particles released by this activity are ionized and swiftly captured by Jupiter’s magnetic field, being accelerated along the field toward the Jovian poles.

Out of this we get decametric radio emissions (DAM) as electrons spiral in the magnetic field, waves that the Juno spacecraft’s Juno Waves Instrument has been detecting. Jupiter also produces radio waves at centimeter and decimeter wavelengths, caused by atmospheric phenomenon as well as activity in the magnetosphere apart from the Io interactions. The planet is, in fact, the noisiest radio emitter in the Solar System apart from the Sun. Homing in on the Io emissions, the GSFC work deploys a new magnetic field model with higher accuracy near the moon and targets the particular geometric configurations of planet and moon needed for Juno to detect the emissions.

Studying the radio emissions mediated by Io doesn’t help us cope with the radiation problem, but it does offer clues about this particular magnetosphere, a phenomenon we’ll come to know much better as future missions arrive. The researchers, reporting in the Journal of Geophysical Research: Planets, found that the decameter radio waves are controlled by not just the strength but the shape of Jupiter’s magnetic field. They emerge from a cone-like space thus formed, so that the spacecraft can only receive the radio signal when Jupiter’s rotation moves that cone across the instrument. The effect is similar to a lighthouse beacon sweeping out to sea. 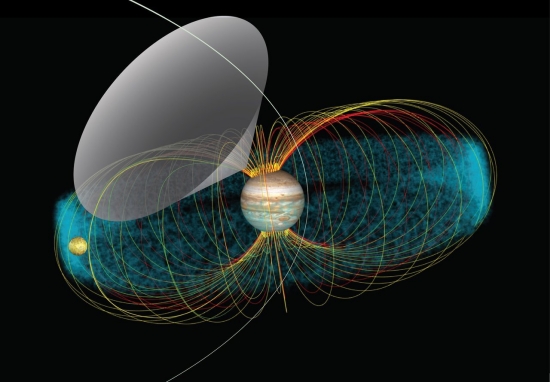 Image: The multicolored lines in this conceptual image represent the magnetic field lines that link Io’s orbit with Jupiter’s atmosphere. Radio waves emerge from the source and propagate along the walls of a hollow cone (gray area). Juno, its orbit represented by the white line crossing the cone, receives the signal when Jupiter’s rotation sweeps that cone over the spacecraft. Credit: NASA/GSFC/Jay Friedlander.

I can remember trying to pick up radio emissions from Jupiter with my first shortwave receiving set — they’ve been a known phenomenon since 1955, detectable from Earth at between 10 and 40 MHz. What we get thanks to the Juno observations is a clarification about why decametric radio waves originating in the northern hemisphere seem more abundant than those from the southern. The paper explains for the first time the particular geometric configurations producing these effects. The authors offer up a plain language summary to go along with the paper’s abstract, from which this:

Thanks to Juno, the geometry of the magnetic field has been better constrained as waves and magnetic field data have been continuously collected within the Jovian environment since July 2016. In this study, we estimate where the radio waves generate and the energy of the electrons that generate these waves, which is up to 23 times higher than previously proposed. We ultimately demonstrate that the geometry of Jupiter’s magnetic field is a primary controller for the higher observation likelihood of radio wave groups originating in the northern hemisphere relative to those originating in the southern hemisphere.

Video: The decametric radio emissions triggered by the interaction of Io with Jupiter’s magnetic field. The Waves instrument on Juno detects radio signals whenever Juno’s trajectory crosses into the beam which is a cone-shaped pattern. This beam pattern is similar to a flashlight that is only emitting a ring of light rather than a full beam. Juno scientists then translate the radio emission detected to a frequency within the audible range of the human ear. Credit: University of Iowa/SwRI/NASA.

What a fascinating place the Jovian system is. Learning the precise locations within the magnetosphere where the decametric emissions originate helps to pin down the needed magnetic field strength and electron density to fit the Juno data. “The radio emission is likely constant,” says Martos, “but Juno has to be in the right spot to listen.”

Next post: Can Life Survive a Star’s Red Giant Phase?