The NEID spectrograph has passed the Operational Readiness Review necessary for final acceptance and regular operations. Developed by NASA and the National Science Foundation’s NN-EXPLORE exoplanet science program, it has been put through a lengthy commissioning process in the five years since the radial velocity planet hunter design was selected. NEID is mounted on the WIYN 3.5m telescope at Kitt Peak National Observatory in Arizona, and we now have word that its scientific mission has begun. 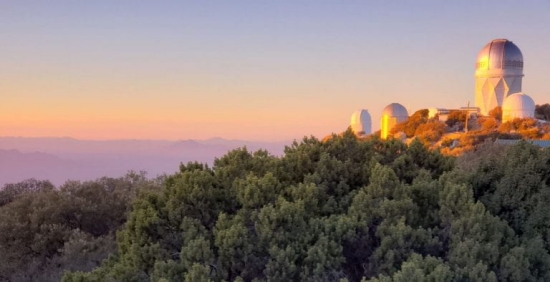 As a radial velocity instrument, NEID is all about the tugs one or more planets exert on the host star, as measured radially — toward Earth, then away from it — during the planets’ orbits. The Doppler shift in the star’s light contains the information. That these are exquisitely tiny measurements should be obvious. Jupiter induces a 13 meter per second wobble on our star, but the Earth only manages to induce a wobble of 9 centimeters per second. NEID’s single measurement precision is already better than 25 centimeters per second, making it an excellent addition to the toolkit for finding new worlds. 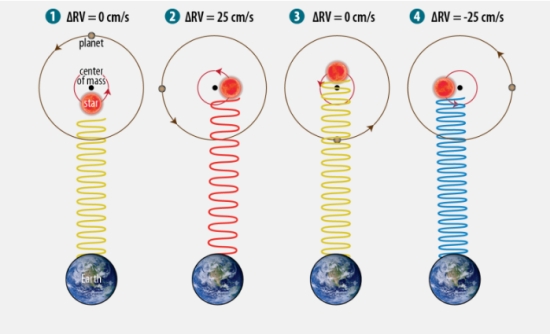 Image: A schematic of the Doppler effect: as the star wobbles under the gravitational influence of its planets, NEID measures the resulting wavelength shifts in its spectrum. Credit: NEID team.

It’s a tribute to the effort behind NEID that the team had to work through COVID-related shutdowns, in essence forcing them to start the commissioning process over, and as the NEID blog notes, for two winters in a row, they had to endure 12-hour nights of observing for up to a week at a time to get the job done. Nice work!

From December of 2020 to April of 2021, a series of experiments tested the reliability of the instrument, its precision and its limitations, making measurements of Doppler-stable stars to analyze the spectrometer’s limiting velocity measurement precision, as recounted in this blog entry by team members, from which this:

What we learned is that across a wide variety of targets, and in a wide variety of conditions, NEID offers radial velocity measurement precision that rivals the best facilities in the world. Our measurements of stable stars consistently show variability less than 1 meter per second. This on-sky stability reflects a combination of noise sources, including the instrument, statistical fluctuations (so-called “photon noise”), and the star’s inherent atmospheric variability. Thus, while it is hard to pin down an exact number, we are assured that NEID’s instrument-limited measurement precision is significantly better than 1 meter per second.

NEID seems on course to complement other high precision spectrographs like HARPS (High Accuracy Radial Velocity Planet Searcher), which is installed at the European Southern Observatory’s 3.6m telescope at La Silla Observatory in Chile, and its successor ESPRESSO (Echelle Spectrograph for Rocky Exoplanet- and Stable Spectroscopic Observations). How far can these instruments push into the centimeters-per-second range, so crucial for finding Earth-class planets? 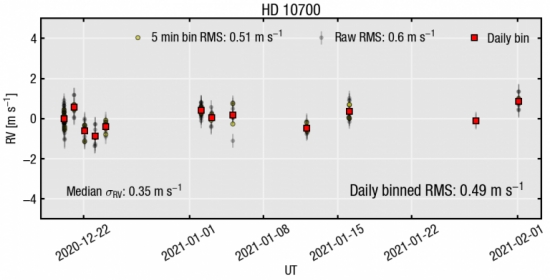 Image: NEID radial velocity measurements of the quiet star tau Ceti. Our on-sky measurements are stable to better than 50 centimeters per second, which indicates the instrument itself is even more stable. Credit: NEID Team.

The NEID team also plans to use a smaller solar telescope in combination with NEID during the day, its express purpose to gather data to produce better machine learning algorithms with which to separate the signal of planets from ‘starspots’ on the target star. These can confound detection efforts by mimicking a planet’s signature. The solar observations will be released publicly to help scientists address the problem, with data processing coordinated by the NASA Exoplanet Science Institute (NExScI) at Caltech/IPAC. The data will be made available through the NEID science archive.

For one direction NEID goes next, we can turn to Andrea Lin (Penn State), who designed and built the solar telescope. Lin explains her own choice of targets:

“The solar telescope was a fun project to work on. I look forward to using NEID for my doctoral dissertation research. One of my planned projects with NEID is to look for planets around K-dwarfs. These stars line up incredibly well with NEID’s capabilities, and the radial velocity method in general, so I’m hoping to discover some small—hopefully terrestrial!—planets around nearby K-stars.”

Next post: Voice of the (SF) Master: Stanislaw Lem and the Philosophy of SETI