Hubble observations from the past two decades have been recently re-examined as a way of investigating what is happening in the tenuous atmosphere of Ganymede, the largest moon in the Solar System. It was in 1998 that the telescope’s Space Telescope Imaging Spectrograph took the first images of Ganymede at ultraviolet wavelengths, showing auroral bands — ribbons of electrified gas — that reinforced earlier evidence that the moon had a weak magnetic field. Now we have news of sublimated water vapor within the atmosphere, an earlier prediction now verified.

Ganymede’s atmosphere, such as it is, is the result of charged particles and solar radiation eroding its icy surface, producing both molecular (02) and atomic oxygen (0) as well as H20, with the molecular oxygen long thought to be the most abundant constituent overall. Surface temperatures are as extreme as you would expect, roughly between 80 K and 150 K (-193 °C to -123 °C).

In 2018, a team led by Lorenz Roth (KTH Royal Institute of Technology in Stockholm) again turned to Hubble, this time in support of the ongoing Juno mission. The goal was to measure Ganymede’s atomic oxygen (0) as a way of resolving differences in the 1998 ultraviolet observations, which were thought to be the result of higher concentrations of atomic oxygen in some parts of the atmosphere. The result was surprising.

Roth’s team used data from Hubble’s Cosmic Origins Spectrograph along with archival data from the Space Telescope Imaging Spectrograph taken in 1998 and 2010. There was little trace of atomic oxygen in Ganymede’s atmosphere, meaning that differences in the auroral images must have some other explanation. The relative distribution of the aurorae allowed the scientists to map them against projected water sources on the surface, released when the moon sublimates water molecules as the equator warms. The phenomenon has no connection with the moon’s subsurface ocean, thought to be buried 150 kilometers beneath the surface.

The fit is strong: The area where water vapor would be expected in Ganymede’s atmosphere, around noon at the equator, correlates with the differences in the ultraviolet images. Roth thinks water vapor produced by sublimation (ice turning directly to vapor with no intervening liquid state) is the explanation:

“So far only the molecular oxygen had been observed,. This is produced when charged particles erode the ice surface. The water vapor that we measured now originates from ice sublimation caused by the thermal escape of water vapor from warm icy regions.” 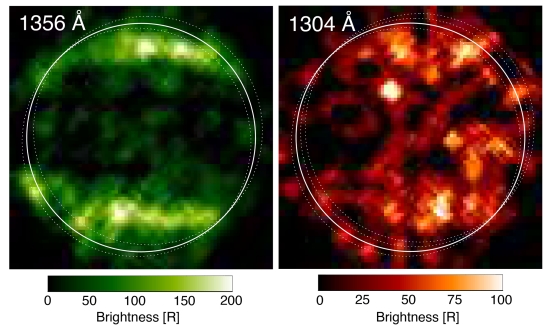 Image: In 1998, Hubble’s Space Telescope Imaging Spectrograph took these first ultraviolet images of Ganymede, which revealed a particular pattern in the observed emissions from the moon’s atmosphere. The moon displays auroral bands that are somewhat similar to aurora ovals observed on Earth and other planets with magnetic fields. This was illustrative evidence for the fact that Ganymede has a permanent magnetic field. The similarities in the ultraviolet observations were explained by the presence of molecular oxygen. The differences were explained at the time by the presence of atomic oxygen, which produces a signal that affects one UV color more than the other. Credit: NASA, ESA, Lorenz Roth (KTH).

The paper goes on to point out the significance of the observation (italics mine):

The low oxygen emission ratios in the center of Ganymede’s observed hemispheres are consistent with a locally H2O-dominated atmosphere. With phase angles around 10◦ …the disk centers are close to the sub-solar points…. A viable source for H2O in Ganymede’s atmosphere can be sublimation in the low-latitude sub-solar regions, where an H2O-dominated atmosphere was indeed predicted by atmosphere models. Our derived H2O mixing ratios are in agreement with these predictions. While previously detected tenuous atmospheres around icy moons in the outer solar system were consistent with surface sputtering (or active outgassing) as source for the neutrals our analysis provides the first evidence for a sublimated atmosphere on an icy moon in the outer solar system. 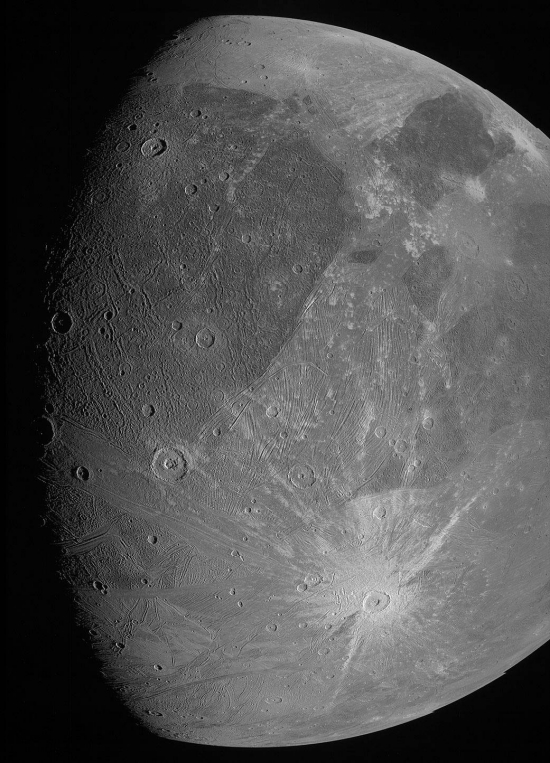 Image: This image of the Jovian moon Ganymede was obtained by the JunoCam imager aboard NASA’s Juno spacecraft during its June 7, 2021, flyby of the icy moon. At the time of closest approach, Juno was within 1,038 kilometers of its surface – closer to Jupiter’s largest moon than any other spacecraft has come in more than two decades. Credit: NASA/JPL-Caltech/SwRI/MSSS.

So we have an atmosphere with what the paper describes as “a pronounced day/night asymmetry.” It’s an important finding for future missions, for atmospheric asymmetries will turn up in data on the magnetosphere and space plasma, meaning numerical simulations and data analysis for future missions have to incorporate them. This points to JUICE, the Jupiter Icy Moons Explorer mission, which will put eleven science instruments past Ganymede in a series of flybys and later orbital operations.

That itself is a stunning thought to someone who grew up thinking about Ganymede as a Poul Anderson novel setting. We’ll have a spacecraft orbiting the moon for a minimum of 280 days, if all goes according to plan, giving scientists abundant data about both the surface and atmosphere. The Roth paper provides significant information about the role of sublimation that will refine the JUICE observing plan.

Next post: ‘Echoes’ from the Far Side of a Black Hole

Previous post: A Path to Planet Formation in Binary Systems