Seeing spacecraft coming together is always exciting, and when it comes to Europa Clipper, what grabs my attention first is the radiation containment hardware. This is a hostile environment even for a craft that will attempt no landing, for flybys take sensitive electronics into the powerful radiation environment of Jupiter’s magnetosphere. 20,000 times stronger than Earth’s, Jupiter’s magnetic field creates a magnetosphere that affects the solar wind fully three million kilometers before it even reaches the planet, trapping charged particles from the Sun as well as Io.

We have to protect Europa Clipper from the intense radiation emerging out of all this, and in the image below you can see what the craft’s engineers have come up with. Now nearing completion at the Jet Propulsion Laboratory, the aluminum radiation vault will ultimately be attached to the top of the spacecraft’s propulsion module, connecting via kilometers of cabling that will allow its power box and computer to communicate with systems throughout the spacecraft. The duplicate vault shown below is used for stress testing before final assembly of the flight hardware. 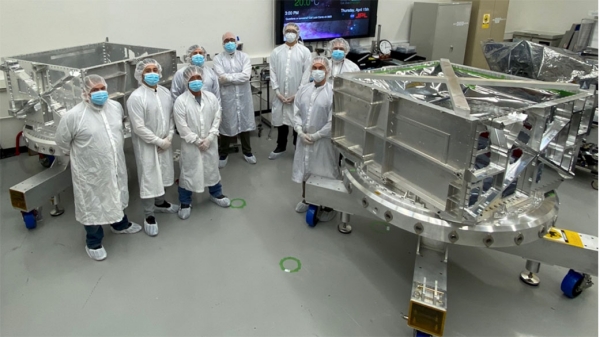 Image: Engineers and technicians in a clean room at NASA’s Jet Propulsion Laboratory display the thick-walled aluminum vault they helped build for the Europa Clipper spacecraft. The vault will protect the spacecraft’s electronics from Jupiter’s intense radiation. In the background is a duplicate vault. Credit: NASA/JPL-Caltech.

The ATLO phase (Assembly, Test, and Launch Operations) begins in the spring of 2022 at JPL, with the radiation vault being one of the first components in place as Europa Clipper enters its final stage of fabrication. The 3-meter tall propulsion module was recently moved from Goddard Space Flight Center in Greenbelt, Maryland to the Johns Hopkins Applied Physics Laboratory (APL) in preparation for the installation of electronics, radios, antennae and cabling. Science instruments, meanwhile, are being tested at the universities and other institutions contributing to the mission.

“It’s really exciting to see the progression of flight hardware moving forward this year as the various elements are put together bit by bit and tested. The project team is energized and more focused than ever on delivering a spacecraft with an exquisite instrument suite that promises to revolutionize our knowledge of Europa.”

Before the ATLO phase begins, Europa Clipper will also be subject to a System Integration Review later this year, a process in which all instruments are inspected and plans for the assembly and testing of the spacecraft are finalized. The destination for all these components and instruments is the main clean room at JPL in Pasadena, where what NASA describes as the ‘choreography’ of building a flagship mission will draw together components from workshops and laboratories in the US and Europe. 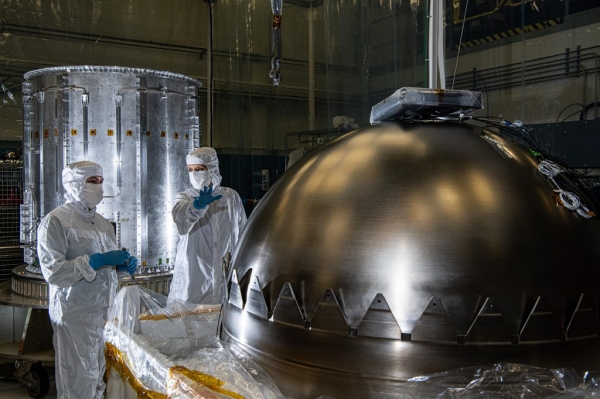 Image: Contamination control engineers in a clean room at NASA’s Goddard Space Flight Center in Greenbelt, Maryland, evaluate a propellant tank before it is installed in NASA’s Europa Clipper spacecraft. The tank is one of two that will be used to hold the spacecraft’s propellant. It will be inserted into the cylinder seen at left in the background, one of two cylinders that make up the propulsion module. Credit: NASA/GSFC Denny Henry.

The travels of the propulsion module emphasize the collaborative nature of any complex spacecraft assembly. The two cylinders making up the module were built at the Applied Physics Laboratory and then shipped to JPL, where thermal tubing carrying coolant to regulate the spacecraft’s temperature in deep space was added. The cylinders then went to Goddard, where the propellant tanks were installed inside them and the craft’s sixteen rocket engines were attached to the outside. It then returned to APL for the installation of electronics and cabling mentioned above. 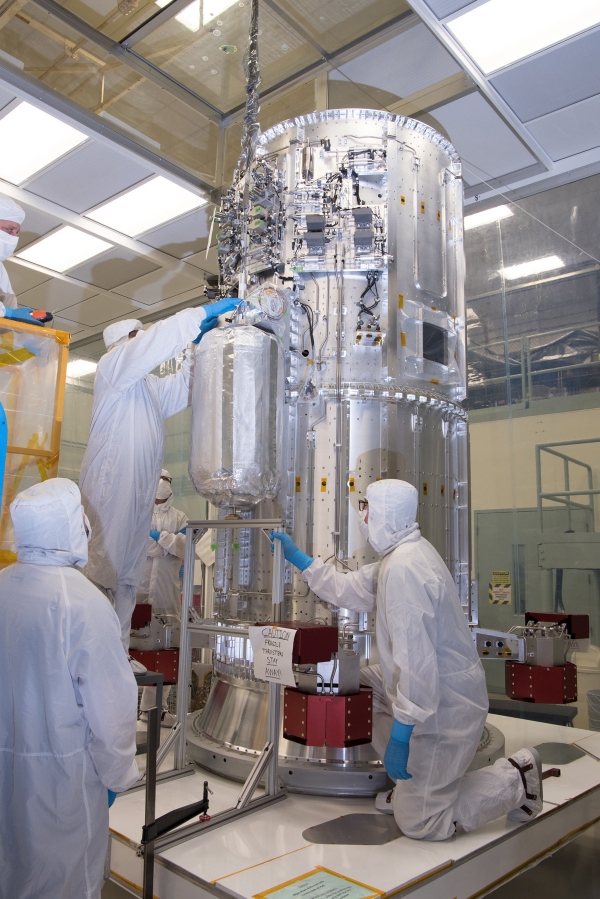 Connecting to the thermal tubing will be Europa Clipper’s radiator, which will radiate enough heat into space to keep the spacecraft in its operating temperature range. APL is now integrating the propulsion module and the radios, antennae and cabling for communications, while a company called Applied Aerospace Structures Corporation in Stockton, California is building the 3-meter high-gain antenna. By the spring of next year, the antenna will be in place at JPL for insertion in the ATLO process.

Nine science instruments will fly aboard Europa Clipper, all being assembled and undergoing testing at NASA centers as well as partner institutions and private vendors. The spacecraft is to investigate the depth of the internal ocean as well as its salinity and the thickness of the ice crust. The latter is obviously a huge factor in any future plans to sample the ocean beneath the ice, but so is the question of whether Europa vents subsurface water into space through plumes that may one day be sampled. 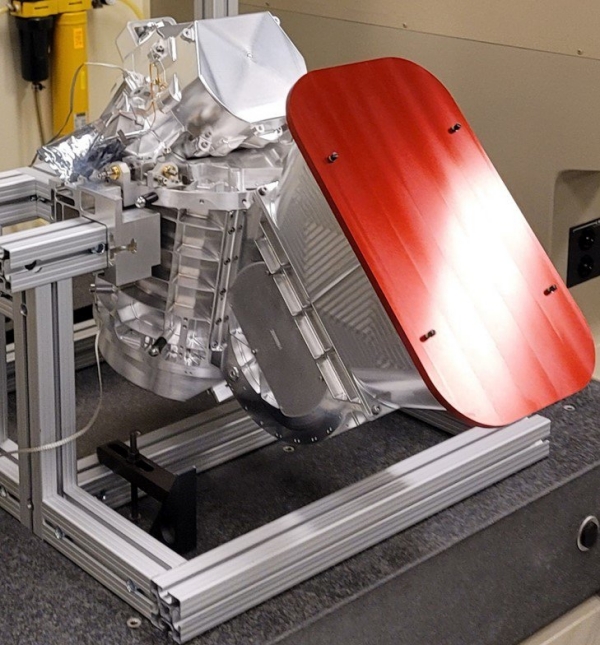 Image: NASA’s Jet Propulsion Laboratory in Southern California is building the spectrometer for the agency’s Europa Clipper mission. Called the Mapping Imaging Spectrometer for Europa (MISE), it is seen in the midst of assembly in a clean room at JPL. Pronounced “mize,” the instrument will analyze infrared light reflected from Jupiter’s moon Europa and will map the distribution of organics and salts on the surface to help scientists understand if the moon’s global ocean – which lies beneath a thick layer of ice – is habitable. Credit: NASA/JPL-Caltech.

We’ll finally be able to update those Galileo images that have served scientists so well in the study of Europa’s surface with new, detailed looks at the surface geology. Launch is currently planned for October, 2024 aboard a Falcon Heavy rocket. Europa Clipper isn’t a life detection mission, but we’ll learn a good deal more about Europa’s potential for supporting life. What kind of mission grows out of that is something it would be foolhardy to predict. One step at a time as Europa reveals its mysteries.

Previous post: L 98-59 b: A Rocky World with Half the Mass of Venus