A Landing Site for Dragonfly

Rotorcraft have certainly been in the news lately, with Ingenuity, the Mars helicopter, commanding our attention. The Dragonfly mission to Titan involves a far more complex rotorcraft capable of visiting numerous destinations on the surface. In fact, Dragonfly makes use of eight rotors and depends upon an atmosphere more helpful than what Ingenuity has to work with on Mars. Titan’s atmosphere is four times denser than what we have on Earth, allowing Dragonfly to move its entire science payload from one location to another as it examines surface landing zones while operating on a world whose gravity is but one-seventh that of Earth.

I want to call your attention to the publication of the science team that just appeared in the Planetary Science Journal, because it lays out the rationale for the various decisions made thus far about operations on and above Titan’s surface. It’s a straightforward, interesting read, and makes clear how much work we have to do here. Yes, we had Cassini for a breathtaking tour that lasted 13 years, with repeated flybys and investigations on Titan using radar, but while we know a lot about structures like lakes and mountains on the surface, we know all too little about their composition.

In fact, as Alex Hayes points out, we didn’t know at the time Cassini launched whether the Huygens probe would find a global ocean at Titan or a solid surface of ice and organics. Because of the uncertainty, the Huygens science experiments were primarily atmospheric, meant to function during the descent phase. Hayes (Cornell University) is a co-investigator for Dragonfly. He adds:

“The science questions we have for Titan are very broad because we don’t know much about what is actually going on at the surface yet. For every question we answered during the Cassini mission’s exploration of Titan from Saturn orbit, we gained 10 new ones.” 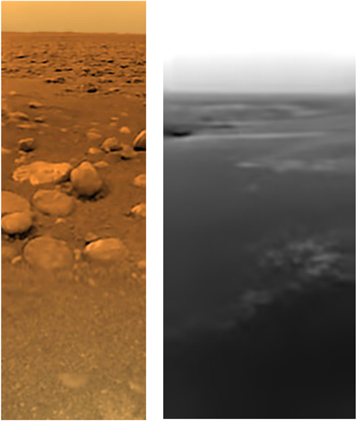 Image: What we do know. This is Figure 1 from the paper. Caption: Dragonfly will image from the surface to provide context for sampling and measurements, as well as in flight to identify sites of interest at a variety of locations. (Left) Huygens image of Titan’s surface; cobbles are 10–15 cm across and may be water ice (Tomasko et al. 2005; Keller et al. 2008; Karkoschka & Schröder 2016a). (Right) Huygens aerial view of terrain akin to the diverse equatorial landscapes that Dragonfly will traverse and image at higher resolution. Credit: NASA/ESA/Barnes et al.

Dragonfly’s 2.7 year mission, starting upon arrival at Titan in 2034 during winter in the northern hemisphere, will commence at a landing site that was chosen for its safety factors (broad, relatively flat terrain) as well as its proximity to nearby interesting scientific targets. The goal is to set down at the equatorial dune fields called Shangri-La, which NASA notes are similar to the dunes found in Namibia on Earth. A series of short flights will explore this area before longer flights of up to eight kilometers begin, the beauty of the design being that Dragonfly will be able to sample interesting surface areas along the route to its destination, the Selk impact crater.

As the mission now stands, the lander should log on the order of 175 kilometers across Titan enroute to Selk. The latter is an interesting place because there is evidence here of past liquid water as well as organics, complex molecules containing carbon, along with hydrogen, oxygen and nitrogen. Methane rain and a snow of organics keep Titan’s weather systems complex amidst a landscape containing the building blocks of life.

But let’s get back to that landing site. The paper refers to Shangri-La as an “organic sand sea,” with the touchdown site located 134 kilometers south of Selk Crater, and approximately 175 kilometers north-northwest of the Huygens Landing Site. The image below is Figure 7 from the paper, giving the landing site in context. 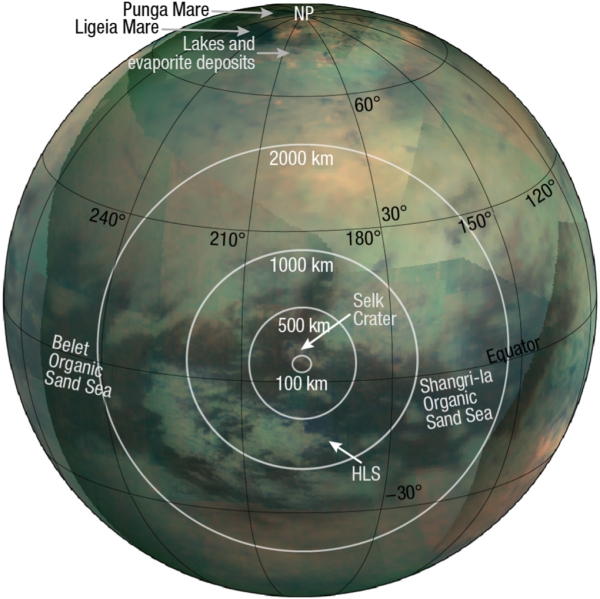 As the paper notes, a ‘sand sea’ is only partially sand. Dunes can be separated by flat sand-free areas called ‘interdunes,’ a feature likewise common to Namibia, where the Namib sand sea is covered only 40 percent by sand. The interdunes that make up the balance are primarily gravel. Cassini was able to resolve Titan’s interdunes to reveal their predominantly icy character, one that matches the spectral properties at the Huygens landing site. The authors find the correlation interesting because it implies the Shangri-La interdunes will include water-ice gravels, “potentially a fine-grained layer damp with condensed methane,” and thus offering a chance for Dragonfly to sample both Titan’s organic sands and materials with a water ice component. 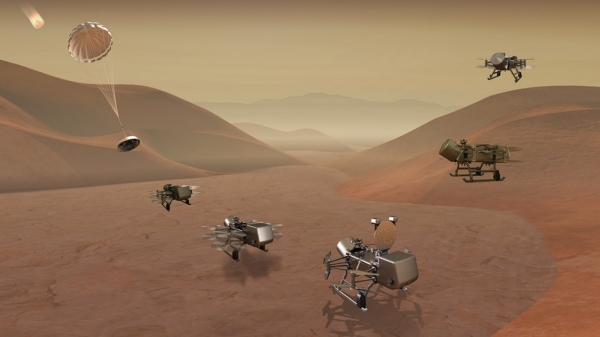 Image: This illustration shows NASA’s Dragonfly rotorcraft-lander approaching a site on Saturn’s exotic moon, Titan. Taking advantage of Titan’s dense atmosphere and low gravity, Dragonfly will explore dozens of locations across the icy world, sampling and measuring the compositions of Titan’s organic surface materials to characterize the habitability of Titan’s environment and investigate the progression of prebiotic chemistry. Credit: NASA/JHU-APL

The path to Selk Crater should take in a variety of terrain with different compositions, which will include the edge of the crater’s ejecta deposits. From Cassini data, the authors believe this material is similar in composition to the Huygens landing site, representing an area likely to feature water ice. Selk itself is 80 kilometers in diameter. Cassini data along with the Dragonfly team’s modeling show the spectral signature of organic sand in the interior and water-ice around the edges of the crater floor.

As you can see, the astrobiological examinations Dragonfly will engage in are both water-based and hydrocarbon-based, meaning a potential biosignature is possible from impact melt deposits or interactions with the interior ocean — this would be life as we know it — or from a form of life we have yet to discover that draws on liquid hydrocarbons within Titan’s lakes, seas and aquifers. The mission is designed around the ability to seek out both, as the paper explains:

We designed the science of Dragonfly around the themes of prebiotic chemistry, habitability, and the search for biosignatures, with an explicit consideration of both water and hydrocarbon solvents. To address prebiotic chemistry, we will determine the inventory of prebiotically relevant organic and inorganic molecules and reactions on Titan. In the realm of habitability, we will determine the role of Titan’s tropical atmosphere and shallow subsurface reservoirs in the global methane cycle, determine the rates of processes modifying Titan’s surface and rates of material transport, and constrain what physical processes mix surface organics with subsurface ocean and/or melted liquid-water reservoirs. Our search for biosignatures will entail a broad-based search for signatures indicative of past or extant biological processes.