A Huge Population of Interstellar Comets in the Oort Cloud

TAOS II is the Transneptunian Automated Occultation Survey, designed to spot comets deep in our Solar System. It may also be able to detect comets of the interstellar variety, of which we thus far have only one incontrovertible example, 2I/Borisov. And TAOS II, as well as the Vera C. Rubin Observatory (both are slated for first light within a year or so) could have a lot to work with, if a new study from Amir Siraj and Avi Loeb (Center for Astrophysics | Harvard & Smithsonian) is correct in its findings.

I cite Borisov as thus far unique in being an interstellar comet because the cometary status of ‘Oumuamua is still in play. On my way to looking at his paper on Borisov, I had an email exchange with Avi Loeb, from which this:

Observations with the Spitzer Space Telescope of `Oumuamua placed very tight limits on carbon-based molecules in its vicinity, implying that it was not made of carbon or oxygen. This led to suggestions that perhaps it is made of pure hydrogen or pure nitrogen, but these would be types of objects we had never seen before. Borisov appeared to be just like a regular comet that we had seen many times before. Clearly, `Oumuamua and Borisov are of very different composition and origin (irrespective of whether `Oumuamua is natural or artificial in origin). 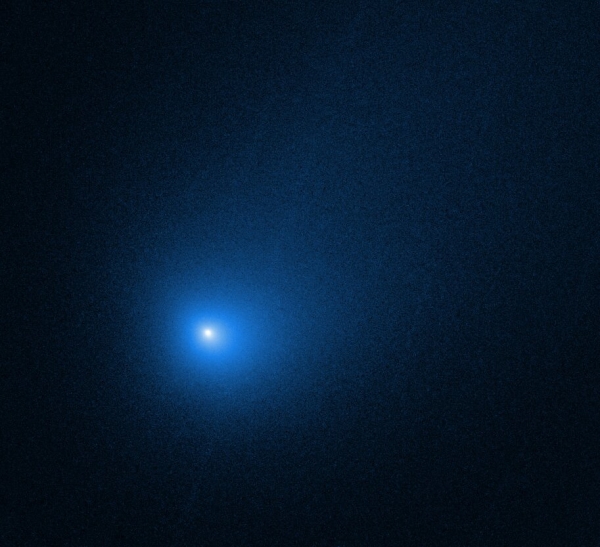 The paper refers to Borisov as “the first confirmed interstellar comet with a known composition,” but if this comet is alone in our catalog, it’s unlikely to remain that way long. Siraj and Loeb argue that there exist more interstellar objects in the Oort Cloud than objects born in the Solar System. Indeed, Loeb in his email cited “a hundred trillion Borisov-like interstellar comets” in this vast space, which extends from roughly 2,000 AU perhaps as far out as 50,000 AU, with some sources citing an outer edge as far as 200,000 AU. That should ring a few bells — Alpha Centauri is 268,000 AU from the Sun, meaning our Oort Cloud could mingle with any similar cloud in that system.

The prospect of studying interstellar objects without leaving our own system is enhanced by these results, even if the calculations contain significant uncertainties. There should be many Borisovs, a small number of which should enter the inner system. This is a reversal of earlier thinking that interstellar visitors should be rare, all part of a reevaluation of the subject forced by the detection of ‘Oumuamua and 2I/Borisov in recent years, and the coming upgrades in equipment and surveys mentioned above.

We are only now getting into position to be able to see these objects and identify their true nature. The detection of Borisov in 2019 allowed scientists to calculate a number density for such objects per star based on a statistical analysis of the likelihood of a single object like this being within 3 AU of the Sun. Other researchers had applied this kind of calibration to ‘Oumuamua, with the number density implied by both being approximately the same. Similarly, the population of bound Oort Cloud comets can be inferred through observations of long-period comets. Figure 1 in the paper shows the comparison. 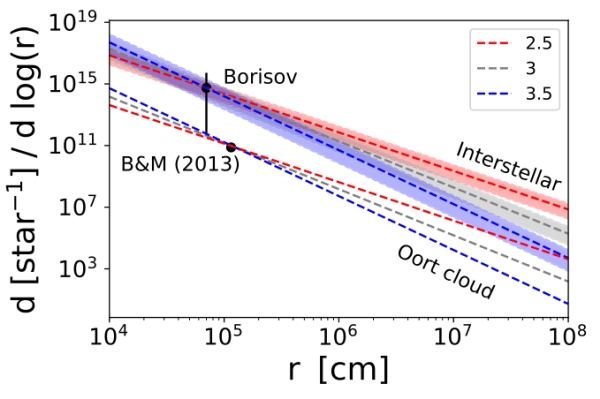 Image: This is Figure 1 from the paper. Caption: Comparison of the relative abundance per star of bound Oort cloud objects, as implied by the observed rate of long-period comets (Brasser & Morbidelli 2013), and interstellar objects, as implied by the detection of Borisov (Jewitt et al. 2020), with a differential size distribution for power-law index, q, values of 2.5, 3, and 3.5, displayed for reference. The error bar indicates the 3σ Poisson error bars for the implication of a singular interstellar object detection on the abundance. The shaded band correspond[s] to the plausible range of nucleus radii for Borisov, given the central value for Borisov’s abundance. The error bounds on the abundance of bound Oort cloud objects are not resolvable on this plot. Credit: Siraj and Loeb.

These are calibrations with, as the paper notes, uncertainties of several orders of magnitude, but even adjusting for these, interstellar objects still prevail in the Oort. They also come with limits that can be tested by observation. Interstellar objects experience negligible gravitational focusing because of their speed (on the order of 30 kilometers per second) and the nature of their orbits as related to their distance from the Sun. Bound Oort Cloud objects should have characteristic orbits that can be differentiated from the orbits of objects that have entered the Oort from elsewhere.

Thus we can look to planned surveys of the sort mentioned above to test the abundances of the two classes of objects, and can expect more visitors of the Borisov kind, even if such comets are far more common in the Oort Cloud than in the inner system. Siraj points out that such an abundance of interstellar objects indicates that planetary formation leaves a great deal more debris than previously thought:

“Our findings show that interstellar objects can place interesting constraints on planetary system formation processes, since their implied abundance requires a significant mass of material to be ejected in the form of planetesimals. Together with observational studies of protoplanetary disks and computational approaches to planet formation, the study of interstellar objects could help us unlock the secrets of how our planetary system — and others — formed.”

Next post: ‘Hycean’ Worlds: A New Candidate for Biosignatures?