Into the Brown Dwarf Desert

It’s a measure of how common exoplanet detection has become that I can’t even remember the identity of the object I’m about to describe. Back in the early days (which means not long after the first main sequence detection, the planet at 51 Pegasi), I was at a small dinner gathering talking informally about how you find these objects. A gas giant was in the news, another new world, or was it really a brown dwarf? And just what was a brown dwarf in the first place? Back then, with just a handful of known exoplanets, introducing the idea of a brown dwarf raised a lot of questions.

Now, of course, we have planets in the thousands and are just opening up the discovery space. Brown dwarfs are plentiful, with some estimates at one brown dwarf for every six main sequence stars. A 2017 analysis of a cluster called RCW 38 by Koraljka Muzic and team concluded that the galaxy contains between 25 and 100 billion brown dwarfs. So we have plenty to work with as we home in on the still controversial borderline between planet and brown dwarf, as well as between brown dwarf and star.

We know that brown dwarfs are not massive enough to support hydrogen fusion but do fuse small amounts of deuterium, an isotope of hydrogen whose nucleus holds one proton and one neutron. The contrast could not be more stark: Low-mass M-class stars can burn hydrogen for tens of billions of years, with longevity far beyond that of our Sun. Brown dwarfs keep getting cooler after going through a short period of deuterium burning. The problem is that only about 30 brown dwarfs have been accurately characterized, as University of Geneva researcher Nolan Grieves points out.

“…we still do not know exactly where the mass limits of brown dwarfs lie, limits that allow them to be distinguished from low-mass stars that can burn hydrogen for many billions of years, whereas a brown dwarf will have a short burning stage and then a colder life. These limits vary depending on the chemical composition of the brown dwarf, for example, or the way it formed, as well as its initial radius.”

The scholarship on brown dwarf mass generally sets a limit of 13 Jupiter masses (MJup) as the dividing line between a gas giant and a brown dwarf. This is the approximate mass that an object must reach to ignite deuterium fusion in its core. The upper limit, dividing brown dwarf from star, has been commonly set at 80 Jupiter masses, which is where the object is massive enough to begin hydrogen burning, fusing hydrogen nuclei into helium nuclei. Exactly where these boundaries occur, though, depends on the chemical composition of the particular object in question.

Thus the value of the work Grieves and team have produced, a study of five brown dwarfs that were found in TESS data through their transit signature and later analyzed using radial velocity methods. They are ‘companion’ objects, as opposed to unbound brown dwarfs. All are near the hydrogen-burning mass limit. Their main sequence host stars were originally identified as TESS Objects of Interest (TOI), and the companions orbit with periods ranging between 5 and 27 days. Because they transit, we can also detect their radii, between 0.81 and 1.66 times Jupiter’s radius. They range in mass between 77 and 98 Jupiter masses, which nudges them into M-dwarf territory. 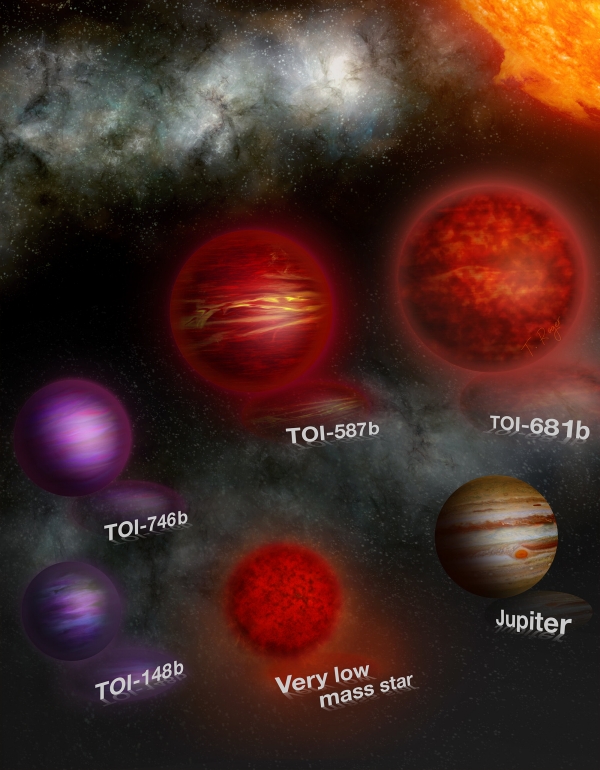 Image: This artist’s illustration represents the five brown dwarfs discovered with the satellite TESS. These objects are all in close orbits of 5-27 days (at least 3 times closer than Mercury is to the Sun) around their much larger host stars. Credit: CC BY-NC-SA 4.0 – Thibaut Roger – UNIGE.

Are we sure these detections are not of very low mass stars? One way of approaching the matter is to look at the relationship between their size and age. A brown dwarf will lose deuterium as it burns up its reserves, thus cooling down and shrinking over time. The fact that the two oldest TESS Objects of Interest — TOI 148 and TOI 746 — have smaller radii while the younger objects are larger points to the likelihood that the former are brown dwarfs.

These age estimates are based, in the case of the comparatively young TOI-587, on what is known as ‘isochrone stellar modelling,’ which essentially fits data onto the Hertzsprung-Russell diagram to draw conclusions about the ages of stars in clusters. The young age of TOI-681 is likewise drawn from inferences due to its membership in a cluster. But even these rough estimates are compromised by the fact that TOI-681b makes only a grazing transit, as does another of the TESS finds, TOI-1213b.

I mention the age issue as just one factor in working out the nature of these objects, and one that is itself not well constrained. Given the uncertainties, the authors’ conclusion points to the need to compile a larger dataset for brown dwarfs:

The sample of transiting brown dwarfs and low-mass stars we analyzed is still too small to make significant statistical claims; however, their eccentricity and metallicity distributions are still consistent with previous suggestions of two separate populations for lower and higher mass brown dwarfs. These companions are all near the hydrogen-burning mass limit and add to the statistical sample needed to distinguish the population differences between brown dwarfs and low-mass stars.

Note that comment on two separate populations of brown dwarfs depending upon mass. We’re just getting a handle on these issues. The questions that hovered over my post-dinner conversation on brown dwarfs back in the 1990s continue to vex astronomers as we probe this class. Defining separate populations for these objects seems to be where we’re headed as we craft formation models.

The relative lack of brown dwarf companions may be related to a transition of the formation mechanisms required to form giant planets and low-mass stars. In this case, lower mass brown dwarfs may form similar to giant planets via core accretion (Pollack et al. 1996) or disk instability (Cameron 1978; Boss 1997) and higher mass brown dwarfs may form similar to stars from gravitational collapse and turbulent fragmentation of molecular clouds (Padoan & Nordlund 2004; Hennebelle & Chabrier 2008). The boundary of these formation mechanisms is unclear and certainly depends on an object’s initial environment.

Brown dwarfs that can be well characterized are the key to resolving these issues, especially those whose radius can be precisely determined, as in the new TESS discoveries. Here we have the kind of robust photometric and spectroscopic measurements that will help astronomers test current formation models.

Next post: Exoplanets Found to be Plentiful in the Galactic Bulge