Exoplanets Found to be Plentiful in the Galactic Bulge

I mentioned yesterday that we are just opening up the discovery space when it comes to exoplanets. It’s an obvious observation for those who follow these things, but I suspect most casual observers don’t realize that almost all the planetary systems we’ve found thus far are located relatively close to the Sun, almost always within no more than a few thousand light years. Most of the stars the Kepler mission observed in Cygnus, Lyra and Draco were about the same distance from galactic center as the Earth. The average distance to the target stars of this most productive of all exoplanet missions yet was 600 to 3,000 light years.

Kepler, like TESS, worked by studying the transits of planets across their host stars, and in Kepler’s case, the method was unable to detect transits at distances any larger than these. In fact, we have only one method that can detect exoplanets at a wide range of distances in the Milky Way, and that is gravitational microlensing, which can take us into the galactic bulge. Here the planet is detected during an occultation, with its host star moving in front of a far more distant star. The pattern of gravitational lensing this produces reveals the closer star’s planet.

But these are one-off observations, not something like a transit that can be seen with regularity. Moreover, while gravitational microlensing offers a priceless chance to find planets tens of thousands of parsecs from the Sun, its utility has been somewhat compromised by the difficulty in assessing stellar distances at ranges more than 10,000 light years out. A new study in Astrophysical Journal Letters is just out that examines the issue, homing in on the relative motion of the lens and the more distance source of light that is being occulted.

Running actual microlensing events against a model of galactic motion, a team led by Naoki Koshimoto infers the galactic distribution of planets. We learn that distance from galactic center does not produce a change in planetary distribution even in the galactic bulge. This is an intriguing result, for one might think that circumstellar disk materials would be more plentiful in areas where the density of stars is as high as in the bulge, affecting a star’s content of metals. Other factors might be the intensity of radiation in high-population areas or the likelihood of differences in the number of multiple star systems.But Koshimoto finds planets everywhere:

“Stars in the bulge region are older and are located much closer to each other than stars in the solar neighborhood. Our finding that planets reside in both these stellar environments could lead to an improved understanding of how planets form and the history of planet formation in the Milky Way.” 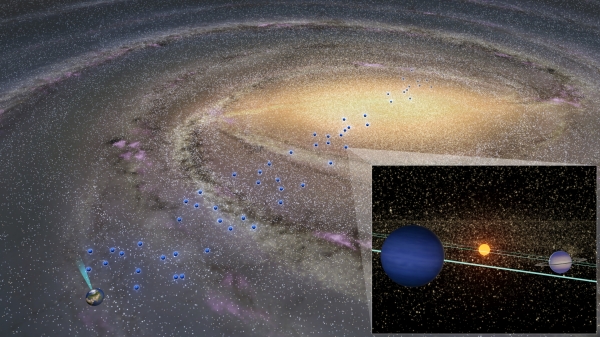 Image: An artist’s conception of cold planet distribution throughout the Milky Way. For comparison, the cyan cone is the Kepler transit survey field. The inset shows an artistic conception of a planetary system in the galactic bulge. Credit: Osaka University.

The researchers build their analysis around a number of observed microlensing events. One factor involved in the Osaka study is the Einstein radius crossing time, which measures the lensing event as host planet and star occult the more distant object. An Einstein ring is the lens effect as light is curved by mass during the occultation (in a perfectly aligned event, the light would appear as a ring). The researchers also measured the proper motion of the lens source, meaning the star (and planet) passing in front of the distant star and bending its light.

The authors estimate planet hosting probabilities by comparing data on the proper motion in some 28 observed microlensing events with what is predicted by their own galactic model, allowing them to estimate “for the first time the dependence of the planet-hosting probability on the Galactocentric distance.” Their model includes planet-hosting probability and considers stellar mass, velocity and density distribution for randomly selected stars. The model draws on Gaia data and a range of astronomical projects building data on stellar motion and velocity.

Needless to say, everything rides on this model, and the calculations that produced it are laid out in all their complexity in the paper. Dissecting the model is a clear path forward for subsequent research into the question of planets in the galactic bulge. But I want to cut to the chase, given the novelty of having this kind of assessment of exoplanet distribution on a galactic level. Noting that the galactic bulge has a stellar density on the order of 10 or more times greater than the neighborhood of the Sun, and that its star population is older, the paper notes the tentative result that location in the galaxy does not change the frequency of planets.

With a nod to earlier research that has suggested otherwise, they add this:

Observations of the solar neighborhood have shown that there is a correlation between stellar metallicity and the occurrence of giant planets…, and have also suggested that close encounters with other stars may affect the evolution of planetary systems… Therefore, due to the abovementioned environmental differences, the planet frequency in the bulge may differ significantly from that in the solar neighborhood. Although our results are still inconclusive, they might imply that cold planets orbiting beyond the H2O snow line also commonly exist in the bulge region regardless of such differences.

Or, to state the matter more directly:

One of the largest uncertainties when comparing the exoplanet population discovered via other exoplanet detection methods with microlensing planets is a possible large dependence of the planet frequency on Galactic location. Our results show that such a dependence is not very large, and one might be able to compare them without considering the difference in Galactic location.

Bear in mind the context here. A 2016 paper from Matthew Penny (Louisiana State University) and colleagues has suggested, based on published microlensing data and a different galactic model, that the galactic bulge could be devoid of planets. Koshimoto and team reject this work on the basis of “an inhomogeneous sample and incorrect microlens parallax measurements,” but it’s a measure of how little we know about planets in the inner regions of the galaxy that early papers like these should reach such profoundly different conclusions.