Centauri Dreams readers will remember Billy Quarles’ name in connection with a 2019 paper on Alpha Centauri A and B, which examined not just those stars but binary systems in general in terms of obliquity — axial tilt — on potential planets as affected by the gravitational effects of their systems. The news for habitability around Centauri B wasn’t good. Whereas the Moon helps to stabilize Earth’s axial tilt, the opposite occurs on a simulated Centauri B planet. And without a large moon, gravitational forcing from the secondary star still causes extreme obliquity variations.

Orbital precession induced by the companion star is the problem, and it may be that Centauri A and B are simply too close together, whereas more widely separated binaries are less disruptive. I’ll send you to the paper for more (citation below), but you can get an overview with Axial Tilt, Habitability, and Centauri B. It’s exciting to think that our ongoing investigations of Centauri A and B will, one of these days, be able to confirm these results or cause them to be reassessed, assuming we find planets there.

Quarles (Georgia Institute of Technology) continues to use numerical methods to look at the dynamics in both single and multiple star systems, with his interest in Centauri A and B undiminished. His most recent paper looks at exomoon possibilities at binary star systems, homing in on orbital stability in systems where a companion star forces greater eccentricity. We can look for such moons using transit-timing variations as well as variations in the durations of a transit. All of this gives us no more than hints of a moon, which is too small to be seen, but it opens up new space for such detections.

“We first had to determine the orbital resonances in the systems we looked at. When moons and planets have slightly elliptical orbits, they don’t always move at the same speed. The more eccentric an orbit, the more frequencies can be excited, and we see these resonances become more and more important. At some point there will be overlapping resonances that can lead to chaos in the system. In our study we have shown, however, that there is enough stable ‘real estate’ to merit a thorough search for moons around planets in double star systems.” 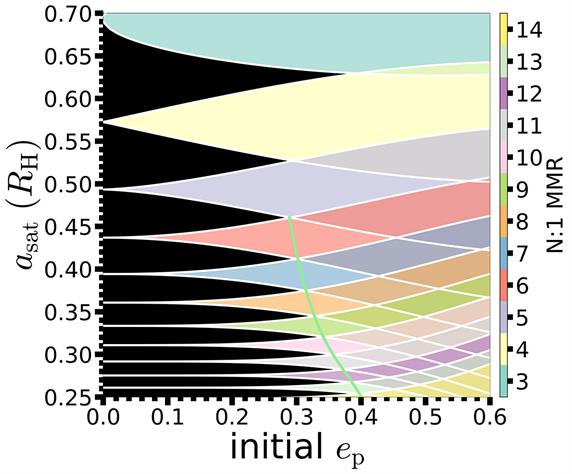 Image: In this map of overlapping orbital resonances, the regions between resonances are colored black and could allow for stable satellite orbits under optimal conditions. The light green curve connects the first point of intersection between adjacent resonances and marks a stability boundary within the three body problem. Credit: Quarles et al.

Transit timing variations (TTV) and variations in the actual duration of the transit (TDV) are the most readily observable effects on the table. TTVs are variations in timing as the planet transits its star. Does the transit show strict periodicity, or is there some variation from one transit to the next? TTVs can be used to demonstrate the presence of other gravitational influences, an unseen planet, or a moon. Transit duration variation measures the time during which any part of the planet obscures the stellar disk. Variations in duration occur as planet and moon orbit a common center of mass.

David Kipping (Columbia University) has been looking at transit timing variations and other factors for a long time in connection with the quest for an exomoon detection, a quest he began as a grad student and continued with his project The Hunt for Exomoons with Kepler. HEK uses dynamics and Kepler photometry in combination, modeling observable effects of a moon on a transit as well as the dynamical perturbations that can be revealed by transit timing and transit duration variations.

Quarles and team have taken the exomoon hunt explicitly into the realm of binary stars, where a stellar companion forces its own perturbations on moons orbiting planets there, affecting their occurrence and orbital evolution. The researchers have applied their findings to hypothetical Earth-Moon analogues at Centauri A and B, and have set up orbital stability limits for exomoons in binary star systems in general.

Gravitational interactions with a companion star can foster greater eccentricity in planetary orbits, with resulting stability issues for moons and implications for detecting them through TTVs. In typical binary systems, “TTV (rms) amplitudes induced by exomoons in binary systems are ≲10 minutes and appear more likely for planets orbiting the less massive stellar component.”

In some systems, say the researchers, we would expect the Hill radius — the region around a planetary body where its own gravity, as compared to that of other nearby bodies, is the dominant force in attracting satellites — to shrink, which could cause moons to become unstable. If too close to the host star, the moon could be ejected from its planetary orbit and flung outwards. Zeroing in on Alpha Centauri:

The truncation of the Hill radius through secular eccentricity oscillations and outward tidal migration can influence potential observations of exomoons through TTVs… The TTV (RMS) amplitude is largest when satellites are close to their outer stability boundaries. These mechanisms limit the outer stability limit and can constrain the range of tidal dissipation allowed. The maximum TTV amplitude in a system like α Cen AB is ∼40 min, where we find that an Earth-Moon analog would exhibit ∼2 min TTV signature.

The acronym RMS above stands for ‘root mean square,’ a reference to the value of the total waveform of the transit data, but let’s not get too deep into the weeds. The point is that a delicate balance needs to be struck so that the moon can survive. This is what Eggl refers to above as ‘stable real estate.’ But to detect an exomoon, we first have to find planets in the Alpha Centauri system, about which the authors have this to say:

The primary star of α Cen AB would be a good candidate for searching for TTV inducing exomoons if transiting Earth-analogs were present. However, surveys of α Cen AB for planets are difficult because of pixel saturation in photometric observations (Demory et al. 2015) and astrophysical noise in radial velocity observations…

Observations of α Cen AB with the Very Large Telescope (VLT) have suggested that any exoplanets there need to be ≲20 M⊕ (Kasper et al. 2019), which bodes well for the potential for terrestrial planets. The first results of the New Earths in the α Centauri Region (NEAR) experiment on VLT uncovered a direct imaging signature of a roughly Neptune-sized planet orbiting α Centauri A (Wagner et al. 2021), but these early results still await confirmation. Detecting exoplanets in binary star systems is a crucial step in the search for exomoons, where a wide array of methods (including TTVs) can be employed.

A crucial step indeed, but detecting an exomoon is an even tougher task, whether in a binary system or not. In 2020, for example, Chris Fox and Paul Wiegert (University of Western Ontario) theorized that six exoplanets found by Kepler could be hosting exomoons. Studying TTVs in the data, the astronomers noted that these were indirect detections, and that nearby planets could also be responsible for the TTVs.

We’re reminded that this is truly a frontier. Having examined the data, Quarles found that four of these six systems would tidally disrupt their exomoons or lose them to outward migration. He is quoted elsewhere as saying of the six possible moons:

“Could they (exomoons) exist physically? Four (candidate systems) of the six could not, two of the six are possible but the signature they produced aren’t produced by the data. Those two probably aren’t moons.”

Exomoon hunter Kipping found no compelling evidence for any of the six exomoons based on his own work. Moons around gas giants could be interesting venues for habitability, and we know the investigation of such will continue. You’ll recall evidence of a moon forming around the planet PDS 70c, an encouraging sign that a confirmed exomoon is getting closer. So it’s a fascinating part of the process that we now examine forced resonances in binary systems as another way into this daunting problem.

Previous post: SETI as a Central Project: An Addendum to Space Development Futures