Something interesting always comes out of the Europlanet Science Congress (probably better known to Centauri Dreams readers under its former name, the European Planetary Science Congress), and this year is no exception. This is the largest planetary science meeting in Europe, normally drawing about 1000 participants, though last year and this year as well have been virtual meetings, the latter ongoing as I write this and running until September 24.

As the conference proceeds, my eye was drawn to a study by Tristan Guillot on the ice giants Uranus and Neptune, targets of (let’s hope) future space missions that can help us resolve the differences between this class of world and gas giants like Jupiter and Saturn. Guillot (CNRS, Laboratoire Lagrange, Nice) targets the odd fact that both of these planets have recently been found to be deficient in ammonia in their atmospheres as compared to the gas giants. Astronomers are puzzled because other compounds such as methane, found in the primordial cloud as the young system coalesced, are clearly there in abundance.

Let’s pause briefly on this point. We’ve talked often about the ‘snowline,’ beyond which materials like methane, ammonia and other trace compounds — ‘ices’ in astronomical parlance — transition from being gases to solids during system formation. The ice giants differ from the primarily hydrogen and helium-based gas giants in being mostly composed of ices beyond the snowline during formation. Recent work at infrared and radio wavelengths indicating the lack of ammonia at Uranus and Neptune thus needs an explanation. The current formation model suggests it should be there. 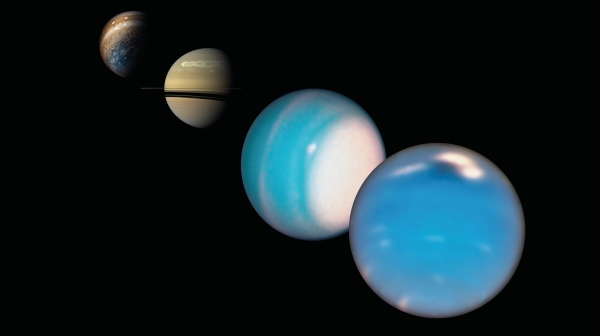 Guillot proposes that the ammonia is actually present at both planets in the form of slushy hailstones of ammonia and water, which would carry it far below the limits of detection within the ice giant atmospheres. The scientist is drawing on data from the highly productive Juno mission to Jupiter, where ammonia turns up at deeper levels than expected because of similar ‘hailstone’ formation.

Is the process common in the outer planets? The Juno data have revealed ammonia-water hailstones forming rapidly in Jupiter’s atmosphere during storms, a fact Guillot attributes to ammonia’s ability to liquefy water ice crystals at low temperatures. Models drawing on the Juno findings make these hailstones out to be up to a kilogram or more in weight, larger than we find on Earth, and they act as a transport mechanism for moving ammonia well below the cloud base. However, at Jupiter the effect is more confined. Says Guillot:

“Thermodynamic chemistry implies that this process is even more efficient in Uranus and Neptune, and the mushball seed region is extended and occurs at greater depths. Thus, ammonia is probably simply hidden in the deep atmospheres of these planets, beyond the reach of present-day instruments.” 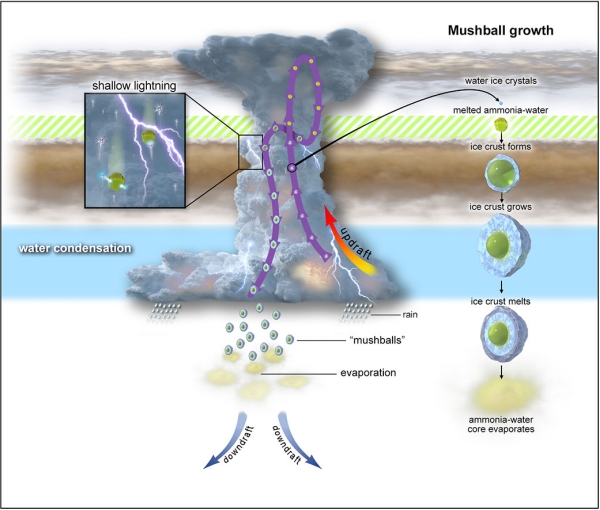 The Juno findings become a plausible solution to the ammonia deficit at Uranus and Neptune, but here we run into the limits of our instrumentation. Just how deep is the ammonia taken by this process? Guillot is hardly the first to point to the need for a dedicated mission, preferably two, in the form of orbiters for each of the ice giants. Only then will we begin to get a handle on mixing in hydrogen atmospheres in the interesting realm of ice giants, which are turning up in many other stellar systems as well.

Guillot adds: “Neptune and Uranus are a critical link between giant planets, like Jupiter and Saturn, and ice giant exoplanets that we are discovering in the galaxy. We really need to go there!”

Dr. Guillot’s paper is still in preparation. The reference for today is Guillot, “Mushballs and the lack of Ammonia in Uranus and Neptune,” Europlanet Science Congress 2021, online, 13–24 Sep 2021, EPSC2021-422. https://meetingorganizer.copernicus.org/EPSC2021/session/41678#Oral_and_Poster_presentations_and_abstracts