Keeping an Eye on Psyche

What makes the asteroid 16 Psyche interesting is that it may well be the exposed core of a planet from the early days of Solar System formation, a nickel-iron conglomeration that normally would lie well below a surface mantle and crust. It’s also an M-class asteroid, a category of which it is the largest known sample. These are mostly made of nickel-iron and thought to be fragmented cores, though many have a composition that has not yet been determined. 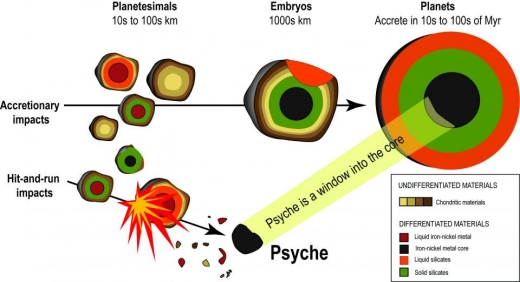 Image: Deep within the terrestrial planets, including Earth, scientists infer the presence of metallic cores, but these lie unreachably far below the planets’ rocky mantles and crusts. Because we cannot see or measure Earth’s core directly, asteroid Psyche offers a unique window into the violent history of collisions and accretion that created the terrestrial planets. Credit: University of Arizona.

M-class asteroids have been imaged before — the Rosetta spacecraft imaged the non-metallic 21 Lutetia in 2010, and 216 Kleopatra has been imaged by ES0’s 3.6 meter telescope at La Silla as well as Arecibo — but now we’ll see one from close orbit.

For Psyche will be visited by a spacecraft of the same name, slated for launch in 2022 via Falcon Heavy, with arrival in 2026 after a 3.5-year cruise under solar electric propulsion. A single Mars flyby will occur along the way. The plan is to spend 21 months in orbit around the asteroid. You’ll recall that this mission will be testing NASA’s DSOC package (Deep Space Optical Communication), using laser techniques to communicate with Earth, See Deep Space Network: A Laser Communications Future for more on the DSOC and its capabilities.

The Psyche spacecraft’s Hall thrusters, using solar arrays as the power source, will be used beyond lunar orbit for the first time in this mission. The propellant is xenon, a neutral gas that will be accelerated and expelled from the spacecraft by electromagnetic fields after being ionized, producing a now familiar blue beam. The spacecraft will carry 922 kilograms of xenon, enough to run the Hall thrusters for years without exhausting available fuel supplies. NASA engineers estimate that chemical methods would require about five times that amount of propellant to achieve the same mission. 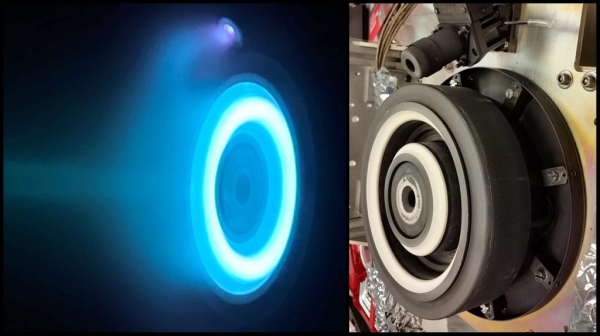 We have fairly scant information about Psyche, as witnessed by the image below, which comes out of an asteroid-imaging project nicknamed HARISSA that is being run by the European Southern Observatory, using adaptive optics on the Very Large Telescope. The survey data along with ground-based radar imaging has determined that Pyche is roughly 226 kilometers wide and contains two interesting surface features, the first of which is a bright area christened Panthia. The second is a huge crater about half the size of the asteroid itself, which the ESO team calls Meroe. No moons have turned up in this work, at least none larger than one kilometer, eliminating one marker for determining the asteroid’s mass.

Image: Views of Psyche from the HARISSA survey, with Meroe and Panthia highlighted. Credit: ESO/LAM.

Orbiting between 378 and 497 million kilometers from the Sun, between the orbits of Mars and Jupiter, Psyche takes five years to complete an orbit, with a rotation period of a little over four hours. If the asteroid is the core of what would have been a planet-sized object, the mission’s science instruments should be able to make the call. They include a multi-spectral imager, a magnetometer, a radio instrument for gravity measurement (tricky at this potato-shaped object) and a gamma-ray and neutron spectrometer. We can hope this will be sufficient to untangle a past likely marked by violent collisions in the era in which the planets were forming.

To keep up with Psyche mission developments from the inside, check the Psyche blog at Arizona State. Here’s a snip from the most recent entry (June 14), from Paige Arthur, who captures some of the excitement of being involved in a deep space mission at building 179, the famed home of JPL’s Spacecraft Assembly Facility:

Engineers and technicians adorned in lab coats, gloves, masks, and hair nets meander around on the floor below, taking measurements with multimeters and mating connectors not too different from the ones Will and I had been handling in the testbed moments before. Along the opposite wall are plaques commemorating all of the spacecraft that have been assembled there — Mariner, Ranger, Voyager, Galileo, Cassini, Curiosity, Opportunity, and, most recently, Perseverance. But in this moment I don’t notice any of it, because my attention is totally captured by the massive spacecraft suspended in the middle.

The Psyche Chassis is a huge black, silver, and gold box the size of a car with an antenna dish fixed to one end. Long struts surround the dish like the spindly legs of a massive aluminum spider, and red electronic boards connected by thick, snaking cords populate the sides. I’ve spent the last two and a half years at JPL working with software simulations and engineering models, with bits of pieces of Psyche’s brain, eyes, and heart, but seeing the physical manifestation of all that work suspended before me in the form of such a tremendous machine still brings me chills.

I’ve never worked on a spacecraft, but I’ve felt the chills, particularly at JPL one day many years ago when I watched Spirit and Opportunity being readied for shipment to Florida. Go Psyche.