A ‘hot Saturn’ with a difference, that’s WASP-127b. Although it’s 525 light years away, we’ve learned a surprising amount about the planet’s atmosphere. Details come via the ongoing Europlanet Science Congress 2021, now being held virtually for pandemic reasons, at which Romain Allart (iREx/Université de Montréal and Université de Genève) spoke this week.

WASP-127b is quite an unusual planet with or without cloud cover. It’s orbiting its star in a scant four days, amped up by stellar irradiation levels 600 times what the Earth receives from the Sun. That would, the researcher points out, produce temperatures in the range of 1100 degrees Celsius (over 1370 Kelvin). The result of all these factors is a world with a fifth the mass of Jupiter actually inflating into a radius 1.3 larger than Jupiter. The word in vogue among astrophysicists for a planet like this seems to be ‘fluffy,’ which pretty much describes it. 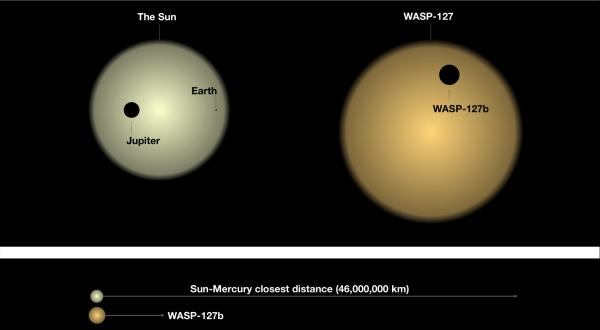 The work on WASP-127b’s atmosphere involves infrared observations from Hubble combined with data from the extraordinary ESPRESSO spectrograph at the European Southern Observatory’s Very Large Telescope in Chile. The method at the VLT is transmission spectroscopy, analyzing the light of the star during a transit as it passes through the planet’s atmosphere. Allart pointed out to the virtual Europlanet Science Congress attendees that surprises were in store:

“First, as found before in this type of planet, we detected the presence of sodium, but at a much lower altitude than we were expecting. Second, there were strong water vapour signals in the infrared but none at all at visible wavelengths. This implies that water-vapour at lower levels is being screened by clouds that are opaque at visible wavelengths but transparent in the infrared. We don’t yet know the composition of the clouds, except that they are not composed of water droplets like on Earth. We are also puzzled about why the sodium is found in an unexpected place on this planet. Future studies will help us understand not only more about the atmospheric structure, but about WASP-127b, which is proving to be a fascinating place.”

The zone within the atmosphere that the scientists were able to probe with their combined datasets proved to be clouds in an atmospheric layer with a pressure ranging between 0.3 and 0.5 millibars. We also know that this is a planet in a retrograde orbit, something Allart says is unexpected for a hot Saturn in a stellar system that is thought to be a whopping 10 billion years old. If things have not settled down by this time (and the planet orbits as well in a different plane than equatorial), it may point to the presence of an unseen planetary companion.

Is planetary migration a possibility here? From the paper:

Our best-fit model shows that the old star WASP-127 is a slow rotator while its planet has a misaligned retrograde orbit (a view of the system is represented in Fig. 4). We also note that the WASP-127 system does not fit in the known dichotomy of hot exoplanets. Winn et al. (2010); Albrecht et al. (2012) have reported that stars with Teff below 6250 K have aligned systems which is not the case of WASP-127b (Teff = 5842 ± 14 K). One possible scenario is that WASP-127b remained trapped in a Kozai resonance with an outer companion for billions of years, and only recently migrated close to its star (see e.g. the case of GJ436b, Bourrier et al. (2018)). An in depth analysis of the system dynamic is beyond the scope of the present study. 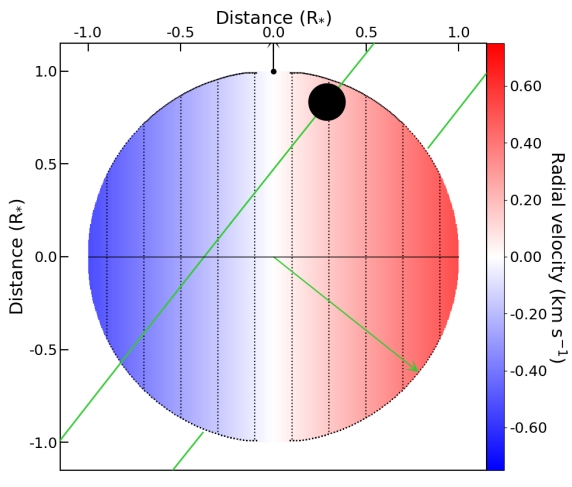 Image: This is Figure 4 from the paper. Caption: Fig. 4: View of the star planet system at the ingress transit. The stellar disk velocity has a color gradient from blue to red for negative to positive stellar surface velocity. The stellar rotation axis is shown as the black top arrow. The planet is represented by the black disk and occults first the red part of the star and then the blue part, following its misaligned orbit shown in green. The green arrow represents the orbital axis. Credit: Allart et al.

So we’ve reached the point where we can tell the difference between cloudy worlds and their cloud-free counterparts by measuring water content, acquiring data that also reveals the pressure of the cloud deck from which the measurements are taken. It’s early days in this kind of analysis, but we can assume that these methods will work their way into future surveys on planetary atmospheres. Understanding atmospheric structure and composition is a path into the formation history and evolution of any exoplanets. Beginning with planets in extreme conditions, we can look forward to future surveys as these techniques are applied to smaller worlds.