The Survival of M-Dwarf Planet Atmospheres

I was interested in yesterday’s story about the two super-Earths around nearby M-dwarfs — TOI-1634b and TOI-1685b — partly because of the research that follows. In both cases there is the question of atmospheres. The two TESS planets are so numbingly close to their host stars that they may have lost their original hydrogen/helium atmospheres in favor of an atmosphere sustained by emissions from within. Hearteningly, we should be able to find out more with the James Webb Space Telescope, on which ride the hopes of so many exoplanet researchers.

Today’s system is the intriguing L 98-59, only 35 light years from Earth and possessed of at least four planets, with a fifth as yet unconfirmed. Here we have two rocky inner worlds, a possible ocean planet (L 98-59 d) and another likely rocky world to the inside of the habitable zone boundary. Perhaps within the habitable zone, if it exists, is L 98-59f, so this is a system to keep an eye on, an obvious candidate as a JWST target.

At UC Riverside, Daria Pidhorodetska wants to know whether small, rocky planets orbiting M-dwarfs like this one have atmospheres. The paper is devoted to the question of whether either Hubble or JWST, perhaps working in tandem, could detect atmospheres in this system. The authors proceeded to model four different types of atmospheres to answer the question with regard to the three inner planets. 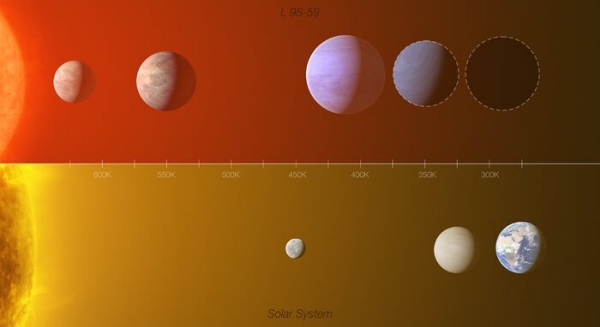 Image: This is an infographic from the European Southern Observatory showing a comparison between the L 98-59 exoplanet system (top) with part of the inner Solar System (Mercury, Venus and Earth), highlighting the similarities between the two. L 98-59 contains four confirmed rocky planets (marked in color in the top panel), orbiting a red-dwarf star 35 light-years away. The planet closest to the star is around half the mass of Venus, making it the lightest exoplanet ever detected using the radial velocity technique. Up to 30% of the third planet’s mass could be water, making it an ocean world. The existence of the fourth planet has been confirmed, but scientists don’t yet know its mass and radius (its possible size is indicated by a dotted line). The team also found hints of a potential fifth planet, the furthest from the star, though the team knows little about it. If confirmed, it would sit in the system’s habitable zone where liquid water could exist on its surface. Credit: ESO/L. Calçada/M. Kornmesser (Acknowledgment: O. Demangeon). [Note: The distances from the stars and between the planets in the infographic are not to scale. The diagram has been scaled to make the habitable zone in both the Solar System and in L 98-59 coincide].

A major problem for M-dwarf planets, to go along with tidal lock, is the fact that during their formation, they are bathed in intense ultraviolet radiation. Enough so that the potential is there to cause any water at the surface to evaporate, while their atmospheres would be under a fierce barrage and might not survive. The question for Pidhorodetska and team is, then, whether the two inner rocky planets have lost their atmospheres completely, if they had one, or if they have been able to replenish them.

The range of atmospheric scenarios takes in planets with atmospheres dominated by water, hydrogen, carbon dioxide, or oxygen and ozone (remaining after loss of hydrogen). The authors argue that an oxygen-dominated atmosphere is the most likely. For each of these scenarios, the authors simulated transmission spectroscopy. L 98-59’s proximity to Earth as well as the fast orbits (less than a week) of its planets speeds up the process of discovery. In fact, says Edward Schwieterman (UC Riverside):

“It would only take a few transits with Hubble to detect or rule out a hydrogen- or steam-dominated atmosphere without clouds. With as few as 20 transits, Webb would allow us to characterize gases in heavy carbon dioxide or oxygen-dominated atmospheres.”

I’m interested, though, specifically in that question of atmosphere loss, with hydrogen escape leaving oxygen and ozone behind. The paper explains:

Highly irradiated planets such as those of the L 98-59 system could have a desiccated atmospheric composition, such as one that is dominated by O2, as a result of major ocean loss during an extended runaway greenhouse phase. A desiccated planet that is rich in abiotic O2 would be expected to form O3 from the photochemical processing of O2, meaning that the direct detection of O3 absorption could be another key indicator of this planetary state.

And the authors point out in their conclusion that we can learn a great deal about the evolution of these planets depending on whether we detect water in their atmospheres. An atmosphere high in oxygen due to the loss of hydrogen during the star’s pre-main sequence phase — in other words, an atmosphere that survives utter desiccation — should have no oceans to detect. Water, or the lack of it, is another marker for this early stage of planetary evolution, and our instruments should be able to make the call.