Our doughty Voyager 1 and 2, their operations enabled by radioisotope power systems that convert heat produced by the decay of plutonium-238 into electricity, have been pushing outward through and beyond the Solar System since 1977. Designed for a four and a half year mission, we now have, more or less by accident and good fortune, our first active probes of nearby interstellar space. But not for long. At some point before the end of this decade, both craft will lack the power to keep any of their scientific instruments functioning, and one great chapter in exploration will close.

What will the successor to the Voyagers look like? The Johns Hopkins University Applied Physics Laboratory (JHU/APL) has been working on a probe of the local interstellar medium. We’re talking about a robotic venture that would be humanity’s first dedicated mission to push into regions that future, longer-range interstellar craft will have to cross as they move far beyond the Sun. If it flies, Interstellar Probe would be our first mission designed from the start to be an interstellar craft.

Image: A possible operation scenario, divided into phases and indicating science goals along the way. Credit: JHU/APL, from the Interstellar Probe 2019 Report.

The nature of the interstellar cloud Brandt refers to is significant. But before examining it, a bit of background. APL’s role in Interstellar Probe has roots in principal investigator Ralph McNutt’s tireless advocacy of what was once called Innovative Interstellar Explorer, a report originally funded by NASA in 2003 and often discussed in these pages. The current study began in 2018 and will continue through early 2022, examining the technologies that would make Interstellar Probe possible, with an eye on the coming Decadal Survey within NASA’s Heliophysics Science Division. Bear in mind as well that the space community has been discussing what we can call ‘interstellar precursor’ missions all the way back to the 1960s — an interesting story in itself! — and the Interstellar Probe concept appeared in the 2003 and 2013 Heliophysics Decadal Surveys.

About those Decadals: Every ten years, Decadal Surveys appear for the four NASA science mission divisions: Planetary Science, Astrophysics, Heliophysics and Earth Science, the idea being to provide guidance for the agency’s science program going forward. So the immediate context of the current effort at APL is that it is being conducted to provide technical input that can feed into the next Heliophysics Decadal Survey, which will cover the years 2023 to 2032. But the implications for science across all four divisions are part of APL’s remit, affecting specific targets and payloads.

What can realistically be done within the 2023-2032 time frame? And what kind of science could a mission like this, launching perhaps in 2030, hope to accomplish? Workshops began in June of 2018 and continue to refine science goals and support engineering trade studies in support of what the team calls “a ‘pragmatic’ interstellar probe mission.” The most recent of these, the fourth, just concluded on October 1. You can see its agenda here.

A launch in the early 2030s demands not futuristic technologies now in their infancy but proven methods that can be pushed hard in new directions. This is, you might say, ‘Voyager Plus’ rather than the starship Enterprise, but you build interstellar capability incrementally absent unexpected breakthroughs. That calls for a certain brute force determination to keep pushing boundaries, something Ralph McNutt and team have been doing at APL, to their great credit , for many years now. A spacecraft like this would be a flagship mission (now known as a Large Strategic Science Mission) — these are the most ambitious missions the agency will fly, a class that has included the Voyagers themselves, Cassini, Hubble and the James Webb Space Telescope.

A variety of methods for reaching beyond the heliosphere in the shortest possible time have been under consideration, including an “Oberth maneuver” (named after scientist Hermann Oberth, who documented it in 1929), where a propulsive burn is performed during a close solar pass that has itself been enabled by a retrograde Jupiter gravity assist. Other Jupiter flyby options, with or without a propulsive burn via a possible upper stage, remain on the table. The plan is to drive the probe out of the Solar System at speeds sufficient to reach the heliopause in 15 years. The participating scientists talk in terms of a flyout speed of 20 AU/year, which translates to 95 kilometers per second. Voyager 1, by comparison, is currently moving at roughly 17.1 kilometers per second.

The Voyagers own our current distance records, with Voyager 1 currently at 154 AU and Voyager 2 at 128 AU. Interstellar Probe would still be returning science at 1000 AU, meaning it would be capable of looking back and seeing not just the Earth in the context of the Solar System, as in Voyager’s ‘pale blue dot’ image, but also taking measurements of the heliosphere from well outside it, helping us understand both the interstellar medium and the effect of our stellar system as it moves through it.

There is much to be learned about the protective magnetic bubble called the heliosphere in which the entire Solar System is embedded. We have to understand that it is anything but static, as Pontus Brandt explains:

During its evolutionary journey around the galaxy, [the Sun] has plowed through widely different environments, witnessed supernova explosions on its path, that have all shaped the system that we live in today. The vast differences in interstellar densities, speeds, charge fractions have been responsible for an extreme range of sizes and shapes of the global heliosphere throughout its history – from many times bigger than today, to a tiny heliosphere below even the orbit of Earth. This, in turn, has had dramatic consequences for the penetration of the primordial soup of interstellar material that have affected several crucial aspects of elemental and isotopic abundances, atmospheric evolution, conditions for habitability and perhaps even biological evolution. Only some 60, 000 years ago, the Sun entered the vast Local Interstellar Cloud (some 30 light years across), and in just a few thousand years the solar system will enter a completely different interstellar cloud that will continue to shape its evolution. 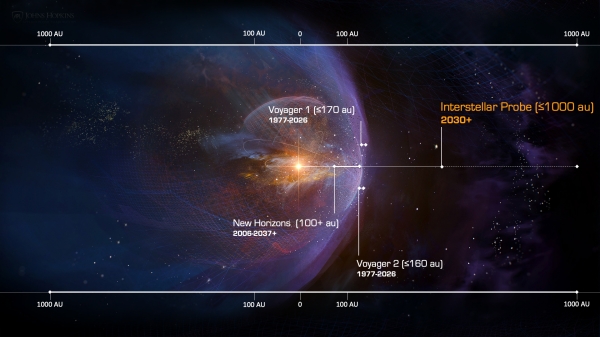 Image: The Sun is on the way to exiting the Local Interstellar Cloud and entering another unexplored interstellar region. Credit: NASA/Goddard/Adler/U. Chicago/Wesleyan.

An interstellar precursor mission can examine energetic neutral atoms (ENAs) to provide data on the overall shape of the heliosphere. Major issues include how plasma from the Sun’s solar wind interacts with interstellar dust to form and continue to shape the heliosphere.

But a mission like this also shapes our views of time, as the Voyagers have done as we have watched their progress through the Solar System, the heliosphere and beyond. Mission scientists turned the 4.5 year mission into a surprising 45 year one solely on the strength of their design and the quality of their components, not to mention the unflagging efforts of the team that operates them. A mission designed from the start for 50 years, as Interstellar Probe would be, will likely have a lifetime far beyond that. Its components are meant to be functional when our grandchildren are in their dotage. Most of its controllers in 2080 have yet to be born.

So this is a multi-generational challenge, a reach beyond individual lifetimes. Let me quote from the Interstellar Probe Study 2019 Report, which is now available online.

It is important to note that the study does not purport to center on “the one and only” interstellar probe but rather on this mission as a first step to more advanced missions and capabilities… In addition to promising historically groundbreaking discoveries, the Interstellar Probe necessitates a transformation in the programmatics needed to accommodate lifetime, reliability, and funding requirements for this new type of multigenerational, multi-decade operational mission. Paving the way for longer journeys utilizing future propulsion technologies, such as those not invoked here, the Interstellar Probe is the first explicit step we take today on the much longer path to the stars.

Principal investigator Ralph McNutt tells me that the Interstellar Probe team is finishing up a Mission Concept Report for NASA on the progress thus far, incorporating results of the recent workshop. This report should be available on the Interstellar Probe website in early December, with a number of items clarifying aspects of the currently available 2019 report. We need to dig into some of the issues that will appear there, for the concept is changing as new studies emerge. In particular, let’s look next time at the ‘Oberth maneuver’ idea, what it means, and whether it is in fact a practical option. I’m surprised at what’s emerging on this.

Next post: Assessing the Oberth Maneuver for Interstellar Probe