I notice that the question of ‘when to launch’ has surfaced in comments to my first piece on Interstellar Probe, the APL study to design a spacecraft that would be, in effect, the successor to Voyager. It’s a natural question, because if a craft takes 50 years to reach 1000 AU, there will likely be faster spacecraft designed later that will pass it in flight. I’m going to come down on the side of launching as soon as possible rather than anticipating future developments.

Two reasons: The research effort involved in stretching what we can do today to reach as high a velocity as possible inevitably moves the ball forward. We learn as we go, and ideas arise in the effort that can hasten the day of faster spacecraft. The second reason is that a vehicle like Interstellar Probe is hardly passive. It does science all along its route. By the time it reaches 1000 AU, it has returned massive amounts of information about the interstellar medium, our Sun’s passage through it, and the heliosphere that protects the Solar System.

All of that is germane to follow-on missions, and we have useful science data all the way. So I’m much in favor of pushing current technology into stretch missions even as we examine how to go faster still with the next iteration, the one that would succeed Interstellar Probe.

Getting Up to Speed

How fast can we travel now, as compared to 1977, when we launched Voyagers 1 and 2? We know we can reach 17 kilometers per second with 1977 technology because that is what Voyager 1 is doing right now. Interstellar Probe advocates would like to see something in the range of 95 kilometers per second as a way of making the 1000 AU journey in 50 years. That’s still, I suppose, within the lifetime of a researcher, but not by much, and it’s heartening to me that we’re extending the boundaries into a frank admission of the fact that some missions may be launched by one generation, maintained by another, and brought home by a third.

I always assumed we had an ace up our sleeves when it came to ramping up Voyager speed levels. Moving close to the Sun and making a propulsive burn at just the right moment seemed a sure way to exploit that deep gravity well and fling a probe outward at high velocity. The idea first appeared in Hermann Oberth’s Wege zur Raumschiffahrt (Paths to Spaceflight), which was published in 1929 in Germany. At the time, Oberth was also working as a consultant on the Fritz Lang film Frau im Mond (The Woman in the Moon), which would popularize the idea of rocketry and space travel. In fact, Oberth would dedicate Wege zur Raumschiffahrt to Lang and actress and screenwriter Thea von Harbou.

The authors of the Interstellar Probe 2019 report note in their extremely useful appendices that Oberth’s thinking on the maneuver that would be named after him anticipated in many ways the idea of using a gravity assist that was developed in the 1960s by Michael Minovitch. His thought experiment involved an astronaut on an asteroid 900 AU from the Sun. The astronaut, apparently quite long-lived, wants to go to a star some 1015 kilometers away (roughly the distance of Regulus). His asteroid has an orbital speed of 1 km/s and an orbital period of 27,000 years.

I won’t go into this in huge detail because it’s laid out so well in the report’s appendix (available here). But Oberth’s setup is that the target star is in the orbital plane of the asteroid, and he assumes the astronaut has a rocket that can produce a velocity change of 6 km/s. Sun, asteroid and target star are in a line in that order. He asks: What is the fastest way to reach the star?

Using the rocket alone reaches it in 5,555,000 years. Waiting for 20,000 years to add the asteroid’s orbital velocity to the velocity of the ship reduces that to 4,760,000 years. But Oberth realizes that the best answer is to use the rocket to move opposite to the asteroid’s motion, falling in toward the Sun to reach 500 km/s at perihelion, then using the remaining rocket fuel to boost the speed a bit further. He ultimately gets 70.9 km/s moving out of the Solar System, and his transit time is now reduced to 470,000 years. Thus the ‘Oberth maneuver’ enters the literature.

A spacecraft launched from Earth has to lose the heliocentric angular momentum of Earth’s orbit to fall toward the Sun in order to make the Oberth maneuver possible, the most efficient method being a direct trajectory from Earth to Jupiter, a retrograde gravity assist at Jupiter, and a long fall back to perihelion, at which point a kick-stage provides the further propulsive burn. All of this, including of course the thermal issues raised by putting the payload into such proximity to the Sun, has to be weighed against a straight gravity assist at Jupiter, with no close solar pass, when contemplating how best to accelerate the Interstellar Probe for the journey. 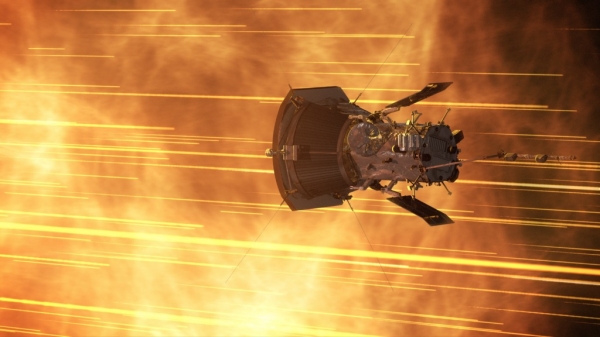 Image: This is an image of Parker Solar Probe as envisioned by Goddard Media Studios at NASA’s Goddard Space Flight Center in Maryland. It’s the closest I could come to what a close solar pass would look like, though it lacks the propulsive element of the Oberth maneuver. Credit: NASA GSFC.

When I contacted Interstellar Probe principal investigator Ralph McNutt (JHU/APL) about these issues, he pointed out that the Mission Concept Report for the entire project would be made available on the probe website in the first week of December. Putting what the report will describe as the Solar Oberth Maneuver (SOM) through the severe filter of engineering capabilities with today’s technologies is a major priority of this report, and the results McNutt conveyed make it clear that my enthusiasm for the concept has been unjustified.

Unjustified, that is, in terms of a spacecraft being designed, as this one must be, around current technologies. Remember that we’re talking about a mission with a specific timeframe, one with a launch in the early 2030s, meaning that the materials and techniques to build and fly it have to be within range today. The Oberth maneuver at the Sun may have possibilities for us down the road. But today’s engineering constraints make the issues stark. As McNutt told me in an email:

…after a very careful look and relying on the same people, including the mission system engineer, who worked the thermal protection system (TSA) for Parker Solar Probe (PSP) we have concluded (1) the SOM offers no advantage over prograde gravity assists in rapid escape from the solar system for a “technology horizon” in the 2030’s and (2) there is no obvious “path” to changing this conclusion for the foreseeable future.

In other words, going to Jupiter straightaway, with no Oberth maneuver, is just as workable, and as we’ll see, avoids a series of thorny problems. One issue is the need for thermal protection, another the demand of launching a payload sufficiently large, one that would incorporate not only the propulsive stage for operations at perihelion preceding the long cruise, but would also include the science instrument package and the necessary high gain antenna that would be needed for data downlink at the distances the probe is envisioned to reach. We have to work within the constraints of present-day launch systems as well as existing engines for the kick.

On thermal issues, the Interstellar Probe team worked with Advanced Ceramic Fibers, an Idaho-based company, on ultra-high temperature material studies, the question being how one could take existing thermal protection as found on the current Parker Solar Probe mission and extend it into the range needed for the Solar Oberth Maneuver. But shield mass, said McNutt, is only one consideration. A ‘ballast’ mass is also required to keep the center of gravity moving along the engine centerline as the propellant burns down during the maneuver.

These issues of mass are critical. Let me quote McNutt again:

The real problem is the mass of the thermal shield assembly – multiple shields plus the supporting structure – to shield just the kick stage itself, even with no Interstellar Probe spacecraft. We’ve adopted solid rocket motors (SRMs) with specific impulses approaching 300s with masses of up to ~4,000 kg (Orion 50XL). In that case, we have an engineering solution that closes on paper, has all of the design margins included, would require specialized design work (> ~10’s of millions and multiple years of dedicated effort) and ends up with about the same performance (flight distance after 50 years) as a prograde Jupiter gravity assist, but with significantly more inherent risk, both in development and in the actual execution of the burn at the Sun itself. Bottom line: it may be doable with an investment of significantly more time and money, but it offers no advantage, and, therefore, we have concluded it would be a poor trade.

Within the upcoming report will be the 181 staging scenarios the team examined by way of reaching its conclusions about the Solar Oberth Maneuver. It becomes clear from the synopsis that McNutt gave me that existing technologies are simply not up to speed to realize the potential of the SOM, and even extending the technologies forward to nuclear rocket engines and greatly enhancing the performance of today’s launch vehicles would not change this fact. To make the Oberth maneuver at the Sun into a viable option, it appears, would take decades of work and demand billions of dollars in new investment. Best to shelve Oberth’s concept for this mission, though I suspect that future technologies will keep the concept in play.

Where to next with Interstellar Probe? If we rule out Oberth, then the two scenarios involving a Jupiter gravity assist remain, the team having considered other options including solar sails and finding them not ready within the needed timeframe. The first is a ‘passive’ flyby, in which every rocket stage is fired in an optimized launch sequence. The second is a powered gravity assist, in which a final kick-stage is reserved for use at Jupiter. We will see what the upcoming report has to say about these options, balancing among outbound speed, complexity, and mass.