A gas giant similar to Jupiter, and with a somewhat similar orbit, revolves around a white dwarf located about 6500 light years out toward galactic center. As reported in a paper in Nature, this is an interesting finding because stars like the Sun eventually wind up as white dwarfs, so we have to wonder what kind of planets could survive a star’s red giant phase and continue to orbit the primary. If Earth one day is engulfed, will the gas giants survive? The new discovery implies that result, and marks the first confirmed planetary system that looks like what ours could become. 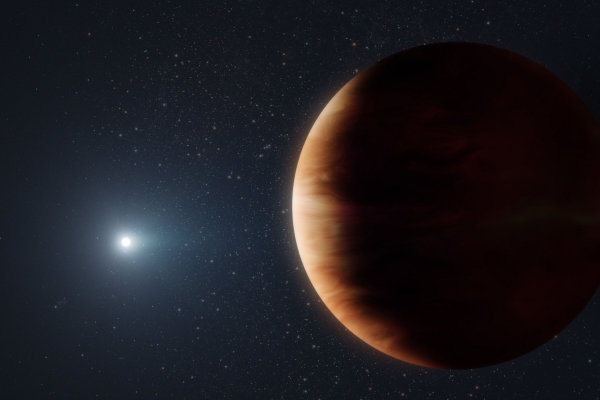 Image: An artist’s rendition of a newly discovered Jupiter-like exoplanet orbiting a white dwarf. This system is evidence that planets can survive their host star’s explosive red giant phase, and is the first confirmed planetary system that serves as an analogue to the face of the Sun and Jupiter in our own Solar System. Credit: W. M. Keck Observatory/Adam Makarenko.

Underlining just how faint white dwarfs are is the method of discovery and the follow-up observations that made the paper on this work possible. A gravitational microlensing event called MOA-2010-BLG-477 was detected at Mount John Observatory (New Zealand) in 2010, later observed by more than 20 telescopes. A team led by Joshua Blackman (University of Tasmania) made infrared observations using the Keck Observatory’s adaptive optics system and its Near-Infrared Camera (NIRC2).

The microlensing analysis had revealed the star and its planet, while the Keck observations confirmed the faintness of the star. The paper’s analysis of the data is lengthy as the authors worked to rule out a variety of stellar possibilities in the main sequence given the faintness of the event. This is what emerged:

As all of the possible main-sequence lenses for the event are brighter than the Keck detection limit and no such star is observed, the lens cannot be a main-sequence star. The same analysis also excludes brown dwarf lenses owing to an upper limit on the microlensing parallax parameter, πE < 1.03, which leads to an implied limit on the lens system mass of ML > 0.15 M⊙. Similarly, the lower microlensing parallax limit of πE > 0.26 implies an upper mass limit of ML < 0.78 M⊙, which rules out neutron stars and black holes as the host stars. As main-sequence stars, brown dwarfs, neutron stars and black holes are ruled out, we conclude that the lens must be a white dwarf.

Image: This is Figure 1 from the paper. Caption: a, An image obtained with the narrow-camera on the NIRC2 imager in 2015 centred on MOA-2010-BLG-477 with an FOV of 8 arcsec. b, A 0.36-arcsec zoomed-in view of the same image as in a. The bright object in the centre is the source. To the northeast (top left) is an unrelated H = 18.52 ± 0.05 star 123 mas from the source, which we refer to as star 123NE. c, The field in 2018. The contours indicate the probable positions of a possible main-sequence host (probability of 0.393, 0.865, 0.989 from light to dark blue) using constraints from microlensing parallax and lens–source relative proper motion. No such host is detected. Credit: Blackman et al.

The authors used a sample of 130 white dwarfs within 20 parsecs of the Sun, excluding binary systems, and ran their calculations under the assumption that all white dwarfs are equally likely to host planets. We wind up with a white dwarf that is, typical of the type, about the size of the Earth, and about 55 percent the mass of the Sun. The gas giant is found to be approximately 40 percent more massive than Jupiter, orbiting at least 3 AU from the host. Thus we find our first analogue to the final stages of our own system some 2 kiloparsecs away toward the center of the galaxy.

It’s likely, according to this work, that the planet is indeed a survivor of the red giant phase of its host star, which in itself is an interesting aspect of the story. The authors discuss orbital change only sparingly, but point out that mass loss in the star pushes a planet toward a wider orbit, while tidal forces have the opposite effect when the star expands beyond about 1 AU. What little work I can find in the literature on this suggests a consensus that Jupiter-class planets orbiting white dwarfs are likely to be found at separations greater than 5 AU, higher than the ~3 AU we find here.