Thoughts on Water Vapor on Europa

Juno has worked wonders for our knowledge of Jupiter, but we continue to rely on Hubble observations and still helpful imagery from Galileo as we study the giant planet’s intriguing moon Europa, anticipating the arrival of Europa Clipper and the European Space Agency’s Jupiter Icy Moons Explorer (JUICE) at the end of the decade. The great question is whether life can exist beneath the ice, and the evidence of plume activity, first found in 2013 in Hubble data, is encouraging in some ways more than others. A mission to Saturn’s moon Enceladus can rely on geysers in a particular place — the Tiger Stripes at the south pole — and on geysers that are frequent. At Europa, predicting where and when a plume will burst forth is all but a black art. How do we sample a Europan plume? 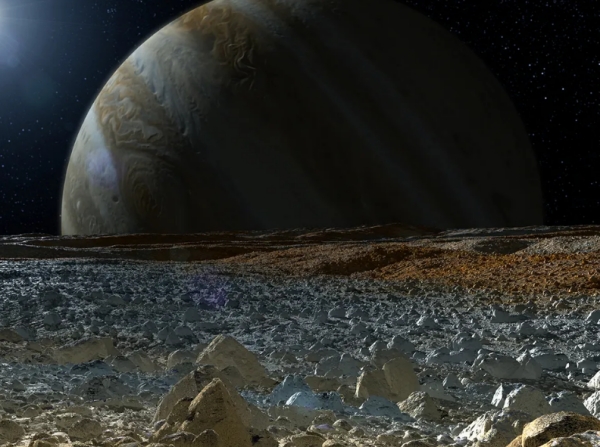 Image: Will we one day see Europa through the eyes of a (well-shielded) lander? Credit: NASA.

While contemplating that question, we push ahead with other analyses that help us characterize this unusual place. A team led by Lorenz Roth (KTH Royal Institute of Technology, Space and Plasma Physics, Sweden) has produced evidence from Hubble that a persistent fraction of water vapor exists within Europa’s atmosphere, what little of it there is (this is an atmosphere with one-billionth the surface pressure of the atmosphere on our planet). Here we are talking not about plumes but processes including sublimation, where surface ices transition directly to vapor. It’s a finding that feeds into planning for those upcoming Jupiter missions and also informs us more deeply about how icy moons react to this high radiation environment.

The paper on this work, which appeared in Geophysical Research Letters (citation below), reinforces the contrast between plume activity and persistent vapor:

A key finding of this study is the consistency in the detection of the reduced oxygen emission ratio on the trailing hemisphere disk center and the overall stability of the ratio profiles in all images with similar geometry. In particular, the oxygen emission ratios in center and limb regions in the four trailing side visits, which were obtained in 1999, 2012, and 2015 and are all consistent within uncertainties. This means, they are diagnostic for persistent atmospheric properties, in stark contrast to the apparent transient nature of detected features that were interpreted to relate to H2O plumes (Paganini et al., 2019; Roth et al., 2014b).

The transition of ice to water vapor raises questions. Water vapor on Europa seems to be limited to the moon’s trailing hemisphere, the part of the moon that remains opposite to its direction of motion along its orbit. The cause of the asymmetry between leading and trailing hemispheres is intriguing given that we find the same phenomenon on Ganymede as well.

The paper also notes that the ratio of H2O relative to O2 is similar on the trailing hemispheres of both Europa and Ganymede. I should note before going further that the detection of water vapor on Ganymede came from Roth’s use of the technique he here uses on Europa, as discussed in Nature Astronomy earlier this year. 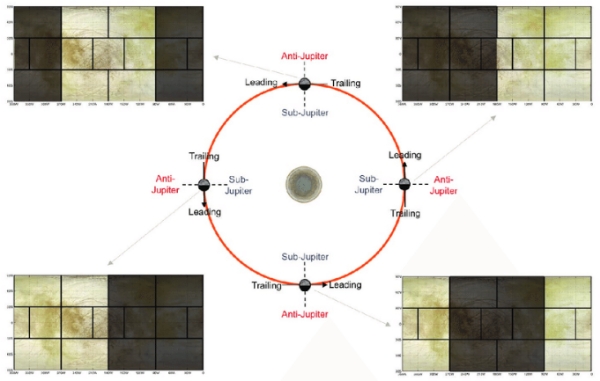 How fully do we understand the production of water vapor in the Europan environment? Consider this snip from the paper. It points not only to sublimation, but also to the phenomenon known as ‘sputtering,’ in which surface particles are bombarded by energetic plasma. Sputtering is considered an alternative source for at least some of the H2O found on Europa’s trailing hemisphere, especially given the modeling of plasma discussed in this paper:

The trailing hemisphere [of Europa] also coincides with the plasma upstream hemisphere, where most of the thermal plasma impinges on Europa’s surface according to modeling (Cassidy et al., 2013; Pospieszalska & Johnson, 1989). In addition, the sputtering yield (amount of neutrals ejected per incident charged particle flux) also increases with surface temperature (Famá et al., 2008), further favoring the trailing hemisphere independent of the distribution of the incident flux…. For both sources [Europa and Ganymede], however, modeled H2O abundances are often significantly lower than our derived value on the trailing side.

Roth’s datasets were produced in Hubble ultraviolet observations using the instrument’s Space Telescope Imaging Spectrograph (STIS). There is still much for the next two spacecraft to investigate in terms of water vapor at Europa as we examine the difference between leading and trailing day-side hemispheres, but the exact mechanism remains unresolved:

Putting the main results in a nutshell, oxygen emission ratios found in HST observations suggest a persistent H2O atmosphere above Europa’s trailing hemisphere, but the source of the water vapor cannot [be] unambiguously identified.