Planetary Protection in an Interstellar Mode

Back in 2013, Heath Rezabek began developing a series in these pages on a proposal he called Vessel, which he had first presented at the 100 Year Starship Symposium in September of 2012. A librarian and futurist, Rezabek saw the concept as a strategy to preserve both humanity’s cultural as well as biological heritage, with strong echoes of Greg Benford’s Library of Life, which proposed freezing species in threatened environments to save them. In Heath’s case, a productive partnership with frequent Centauri Dreams contributor Nick Nielsen led to articles by both, which produced a series of interesting discussions in the comments.

I noticed in Philip Lubin’s new paper, discussed here on Friday, an explicit reference to the idea of interstellar craft as possible backup devices for living systems. Lubin singled out the Svalbard Global Seed Vault (styled by some the ‘Doomsday Vault’), which preserves seed samples numbering in the millions, with the aim of keeping them safe for centuries. Here too we have the idea of protecting fragile living systems from existential risk in the form of what Lubin refers to as a ‘genetic ark,’ meaning that while his paper looks at tiny ‘wafer’ probes capable of carrying microorganisms, future iterations might develop into another kind of Earth backup system.

Is interstellar flight in future centuries to become the vehicle for preserving our planet’s heritage and scattering copies of ideas and organisms through the universe? It’s a persuasive thought. Here’s how Lubin and team describe it:

In addition to the physical propagation of life, we can also send out digital backups of the “blueprints of life”, a sort of “how-to” guide to replicating the life and knowledge of Earth. The increasing density of data storage allows for current storage density of more than a petabyte per gram and with new techniques, such as DNA encoding of information, much larger amounts of storage can be envisioned. As an indication of viability, we note the US Library of Congress with some 20 million books only requires about 20 TB to store. A small picture and letter from every person on Earth, as in the “Voices of Humanity” project, would only require about 100 TB to store, easily fitting on the smallest of our spacecraft designs. Protecting these legacy data sets from radiation damage is key and is discussed in Lubin 2020 and Cohen et al. 2020. 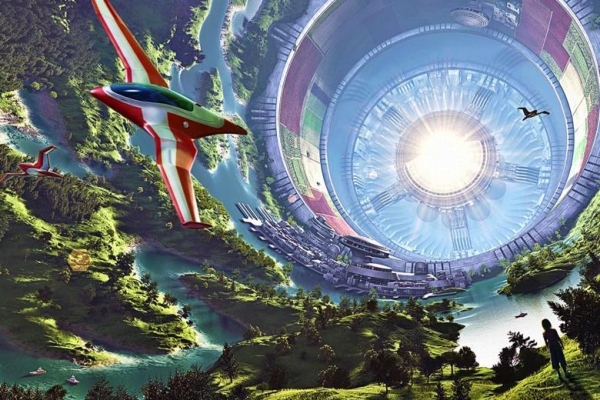 Image: How much can we ultimately preserve of Earth? And if we eventually can build large-scale arks, where will we send them? Credit: Adam Benton.

Protecting Planets Beyond Our Own

I’m heartened by two things in this paper. The first is, as I mentioned Friday, the consideration of how to use deep space technologies in the service of biology, a field usually discussed in the interstellar community only in terms of biosignatures from exoplanet atmospheres. If we are at the beginning of what may eventually become an interstellar expansion, we should be thinking practically about what future technologies can do to enhance both the preservation of and adaptation of biological systems to deep space. The need for this kind of study is already apparent as we contemplate the possibility of future off-world colonies on the Moon or Mars.

It’s also heartening to see the thread of knowledge preservation mixing with thinking on biological preservation in the event of future catastrophe. If something goes desperately wrong on our home world — plug in the scenario, from nuclear war to runaway AI or nanotech — we need to be able to save enough of our species to rebuild, either here or elsewhere. If here, then archival installations in nearby space could complement those on Earth. If elsewhere, we can hope to scatter knowledge and biological materials widely enough that some may survive.

This concept, however, runs into the question of planetary protection, given that we already have a deep concern about contaminating places we visit with our spacecraft. There are guidelines in place, as the Lubin paper notes, under Article IX of the Outer Space Treaty in the form of Committee on Space Research (COSPAR) regulations. At present, these extend only to Solar System bodies, and include the problem of contamination from Earth as well as contamination from other bodies via sample return materials brought back to our planet.

If we ever reach the point where realistic travel times to other stars become possible, we’ll confront the issue in exoplanet systems as well. It’s a big topic, too big to handle here in the time allowed, but it’s interesting how Lubin and colleagues discuss it in terms of the tiny probes they contemplate sending out beyond the heliosphere. The problem may be resolved within the mission profile. From the paper:

An object with a mass of less than ten grams accelerating with potentially hundreds of GW of power, will, even if it were aimed at a planetary protection target (for example Mars), enter its atmosphere or impact the solar system body with enough kinetic energy to cause total sterilization of the biological samples on board. The velocity of the craft would thus serve as an in-built mechanism for sterilization. The mission profile does not include deceleration, so this mechanism is valid for the entirety of the mission.

We can add to this the fact that Starlight envisions craft aimed at targets outside the ecliptic, significantly lowering the chances of impact with a planet. If current requirements call for demonstrating probabilities of 99% to avoid impact for 20 years and 95% to avoid impact for 50 years, these requirements seem to be met by the kind of craft Starlight contemplates. The kinetic energy of one of these wafer craft moving at a third of the speed of light is roughly 1 kiloton TNT per gram, according to the authors, which would vaporize craft and payload.

If we go interstellar, though, other issues emerge. All that kinetic energy falls into a different light if we imagine an interstellar flyby probe slamming inadvertently into a planetary atmosphere. If the effect would be little more than that of an arriving large meteorite, we still face the question of affecting an environment. There is more to contamination than a biological question, and it’s obvious that any future interstellar capability will demand a rethinking of regulations governing how our presence makes itself known to any local life forms. We have plenty of time to ponder these matters, but it’s good to see they’re already on the radar in some quarters.

On this score, Lubin and team point to a 2006 paper in Space Policy by C.S. Cockell and G. Hornbeck called “Planetary parks-formulating a wilderness policy for planetary bodies” (abstract). Here questions of planetary protection mingle with what the authors call “utilitarian and intrinsic value arguments.” The need to preserve an exoplanet’s pre-existing environment is a major theme in this work, one that I want to explore in a future post.

Next post: BLC1: The ‘Proxima Signal’ and What We Learned