The surge of interest in white dwarfs continues. We’ve known for some time that these remnants of stars like the Sun, having been through the red giant phase and finally collapsing into a core about the size of the Earth, can reveal a great deal about objects that have fallen into them. That would be rocky material from planetary objects that once orbited the star, just as the planets of our Solar System orbit the Sun in our halcyon, pre-red-giant era.

The study of atmospheric pollution in white dwarfs rests on the fact that white dwarfs that have cooled below 25,000 K have atmospheres of pure hydrogen or helium. Heavier elements sink rapidly to the stellar core at these temperatures, so the only source of elements higher than helium — metals in astronomy parlance — is through accretion of orbiting materials that cross the Roche limit and fall into the atmosphere.

These contaminants of stellar atmospheres are now the subject of a new investigation led by astronomer Siyi Xu (NSF NOIRLab), partnering with Keith Putirka (California State University, Fresno). Putirka is a geologist, and thus a good fit for this study. Working with Xu, an astronomer, he examined 23 white dwarfs whose atmospheres are found to be polluted by such materials. The duo took advantage of existing measurements of calcium, silicon, magnesium and iron from the Keck Observatory’s HIRES instrument (High-Resolution Echelle Spectrometer) in Hawai‘i, along with data from the Hubble Space Telescope, whose Cosmic Origins Spectrograph came into play.

Their focus is on the abundance of elements that make up the major part of rock on an Earth-like planet, especially silicon, which would imply the composition of rocks that would have existed on white dwarf planets before their disintegration and accretion. The variety of rock types that emerge is wider than found in the rocky planets of our inner Solar System. Some of them are unusual enough that the authors create new terms to describe them. Thus “quartz pyroxenites” and “periclase dunites.” None have analogs in our own system.

The finding has implications for planetary development, as Putirka explains:

“Some of the rock types that we see from the white dwarf data would dissolve more water than rocks on Earth and might impact how oceans are developed. Some rock types might melt at much lower temperatures and produce thicker crust than Earth rocks, and some rock types might be weaker, which might facilitate the development of plate tectonics.”

The paper goes into greater detail:

…while PWDs [polluted white dwarfs] might record single planets that have been destroyed and assimilated piecemeal, the pollution sources might also represent former asteroid belts, in which case the individual objects of these belts would necessarily be more mineralogically extreme. If current petrologic models may be extrapolated, though, PWDs with quartz-rich mantles…might create thicker crusts, while the periclase-saturated mantles could plausibly yield, on a wet planet like Earth, crusts made of serpentinite, which may greatly affect the kinds of life that might evolve on the resulting soils. These mineralogical contrasts should also control plate tectonics, although the requisite experiments on rock strength have yet to be carried out. 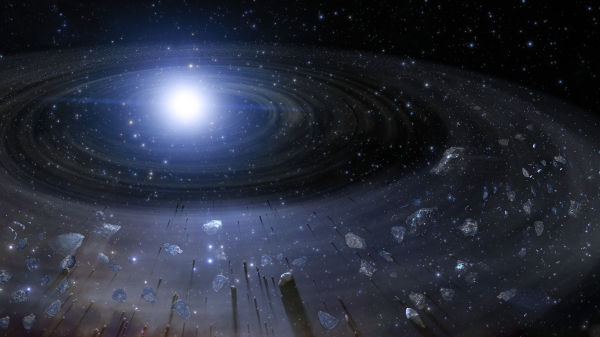 Image: Rocky debris, the pieces of a former rocky planet that has broken up, spiral inward toward a white dwarf in this illustration. Studying the atmospheres of white dwarfs that have been polluted by such debris, a NOIRLab astronomer and a geologist have identified exotic rock types that do not exist in our Solar System. The results suggest that nearby rocky exoplanets must be even stranger and more diverse than previously thought. Credit: NOIRLab/NSF/AURA/J. da Silva.

High levels of magnesium and low levels of silicon are found in the sample white dwarfs, suggesting to the authors that the source debris came from a planetary interior, the mantle rather than the crust. That contradicts some earlier papers reporting signs of crustal rocks as the original polluters, but Xu and Patirka believe that such rock occurs as no more than a small fraction of core and mantle components.

“We believe that if crustal rock exists, we are unable to see it, probably because it occurs in too small a fraction compared to the mass of other planetary components, like the core and mantle, to be measured.”