SPARCS: Zeroing in on M-dwarf Flares

Although we’ve been talking this week about big telescopes, from extremely large designs like the Thirty Meter Telescope and the European Extremely Large Telescope to the space-based HabEx/LUVOIR descendant prioritized by Astro2020, small instruments continue to do interesting work around the edges. I just noticed a tiny one called the Star-Planet Activity Research CubeSat (SPARCS) that fills a gap in our study of M-dwarfs, those small stars whose flares are so problematic for habitability.

Under development at Arizona State University, the space-based SPARCS is just halfway into its development phase, but let’s take a look at it in light of ongoing work on M-dwarf planets, because it bodes well for turning theories about flare activity into data that can firm up our understanding. The problem is that while theoretical studies delve into ultraviolet flaring on these stars, the longest intensive UV monitoring on an M-dwarf done thus far has been a thirty hour effort with the Hubble instrument.

We need more, which is why the SPARCS idea emerged. A team of researchers led by ASU’s Evgenya Shkolnik has produced an overview of the NASA-funded mission’s science drivers and its intention of deepening our understanding of star-planet interactions. “Know thy star, know thy planet,. . . especially in the ultraviolet (UV),” comments the team in their abstract, which also points to the necessity of data collection for these intensely studied stars, ubiquitous in the galaxy and known to host interesting planets like Proxima Centauri b. 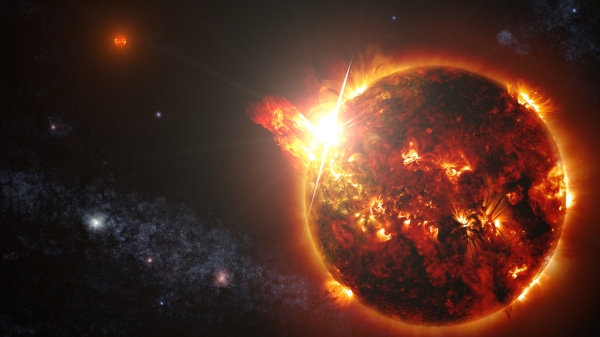 Image: An example of M-dwarf flaring. DG CVn, a binary consisting of two red dwarf stars shown here in an artist’s rendering, unleashed a series of powerful flares seen by NASA’s Swift. At its peak, the initial flare was brighter in X-rays than the combined light from both stars at all wavelengths under typical conditions. Credit: NASA’s Goddard Space Flight Center/S. Wiessinger.

Can such a world be habitable? Recent observations have shown that flare events produce a more severe flux increase in the ultraviolet than the optical; a flare peaking on the order of 0.01x the star’s quiescent flux in the optical, write the authors, can at UV wavelengths brighten by a factor of 14000. UV ‘superflare’ events — as much as 10,000 times more energetic than the flares produced by our G-class Sun — can produce 200x flux increases that are expected to occur on a daily basis on young, active M-dwarfs.

Thus habitability can be compromised, with UV radiation damaging planetary atmospheres, eroding ozone and producing lethal levels of radiation at the surface. An Earth-like planet in the habitable zone can likewise be subject to methane depletion under the kind of flaring Proxima Centauri has been known to produce. Thus the composition of an M-dwarf planet’s atmosphere is subject to interactions with its star that may prevent life from ever arising, or drastically affect its development.

SPARCS is a CubeSat observatory carrying a 9-cm telescope and the associated gear to perform photometric monitoring of M-dwarf flare activity in the near (258−308 nm) and far ultraviolet (153−171 nm). The target: 20 M-dwarfs in a range of ages from 10 million to 5 billion years old, examined during a mission lifetime of one year. Planned for launch in 2023 into a heliosynchronous orbit that offers “decent thermal stability and optimized continuity in target monitoring,” SPARCS will track flare color, energies, occurrence rate and duration on active as well as inactive M-dwarfs.

The authors believe the observatory will also improve our atmospheric models for M-dwarf planets, useful information as we look toward future biosignature investigations, and helpful as we fill an obvious gap in our data on this class of star. The software onboard is interesting in itself:

The payload software is able to run monitoring campaigns at constant detector exposure time and gain, but due to the expected high amplitudes of M dwarf UV flares, observations throughout the nominal mission will be conducted using a feature of the software that autonomously adjusts detector exposure times and gains to mitigate the occurrence of pixel saturation during observations of flaring events. SPARCS will be the first space-based stellar astrophysics observatory that adopts such an onboard autonomous exposure control.

So we have a small space telescope that will be able to monitor its targets in both near- and far-ultraviolet wavelengths simultaneously, managed by a dedicated onboard payload processor that allows the observatory to adjust for pixel saturation during flare events. This “autonomous dynamic exposure control algorithm” is a story in itself, adding depth to a mission to investigate the most extremely variable stars in the Hertzsprung–Russell diagram. SPARCS should help us learn whether these long-lived stars can allow planetary habitability as they age into a less dramatic maturity.

The paper is Ramiaramanantsoa et al., “Time-Resolved Photometry of the High-Energy Radiation of M Dwarfs with the Star-Planet Activity Research CubeSat (SPARCS),” accepted for publication in Astronomische Nachrichten (preprint).