Circumbinary planets are those that orbit two stars, a small but growing category of worlds — we’ve detected some 14 thus far, thanks to Kepler’s good work, and that of the Transiting Exoplanet Survey Satellite (TESS). The latest entry, TIC 172900988, illustrates the particular challenge such planets represent. Transit photometry is a standard method for finding planets, detecting the now familiar drop in starlight as the planet moves between us and the surface of the host star. Kepler found thousands of exoplanets this way. But when two stars are involved, things get complicated. 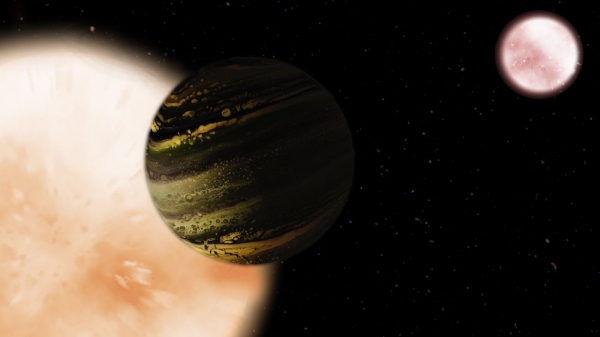 Image: The newly discovered planet, TIC 172900988b, is roughly the radius of Jupiter, and several times more massive, but it orbits its two stars in less than one year. This world is hot and unlike anything in our Solar System. Credit: PSI/Pamela L. Gay.

Three transits are required to determine the orbital path of a planet. For us to make a detection, a circumbinary planet will have to transit both stars, but the timing of the transits can vary. The planet may transit the first star, then the second, before returning to transit the first. Nader Haghighipour (Planetary Science Institute) points out that the orbital period of a circumbinary planet will always be much longer than the orbital period of the binary star, and that means detecting three transits will be problematic for a telescope like TESS, which observes each portion of sky for only 27 days.

Finding transiting planets orbiting around binary stars is much more difficult than around single stars. The transits are shallower (due to the constant ‘third-light’ dilution from the binary companion), noisier (due to starspots and stellar activity from two stars), and can be blended with the stellar eclipses. This difficulty is greatly compounded when the observations cover a single conjunction and, even if multiple transits are detected as in the system presented here, they are neither periodic, nor have the same depth and duration… The transit times and shapes depend on the orientation and motion of the binary stars and of the CBP [circumbinary planet] at the observed times. The complexity of such transits is both a curse and a blessing…

A blessing, the authors argue, because such a detection yields information “richer than what can be obtained from a single transit of a single-star planet,” offering better estimation of the planet’s orbital period. 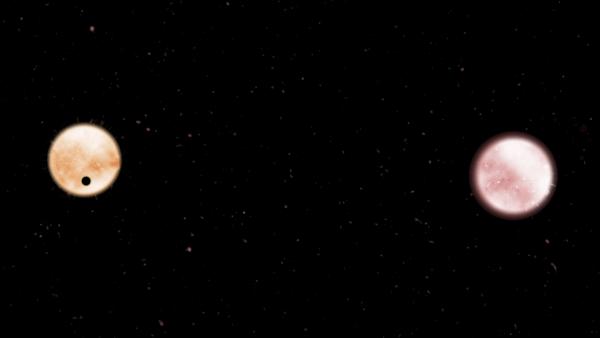 Image: A newly discovered planet was observed in the system TIC 172900988. In TESS data, it passed in front of the primary star (right) and 5 days later (shown) passed in front of the second star (left). These stars are just over 30% larger than the Sun, and differ very little in size. Credit: PSI/Pamela L. Gay.

Haghighipour is part of a team of astronomers with circumbinary planet experience; he also contributed to a 2020 paper in The Astronomical Journal that produced a technique for discovering circumbinary planets using only two transits, one across each star during the same conjunction. It was this method, ideally suited for TESS, that led the same team to make the just announced discovery of TIC 172900988b. This is the first TESS circumbinary planet to be found using these methods.

TIC 172900988b takes 200 days to complete a full orbit of the binary system. The planet is a gas giant of Jupiter size, the most massive transiting circumbinary planet found thus far. The team, led by Veselin B. Kostov (SETI Institute), observed it transit the primary star, followed five days later by a transit of the secondary, as the binary eclipsed itself over a 20-day orbit.

The Kepler mission discovered its circumbinary worlds by finding pairs of transits during a single conjunction, making it clear that the phenomenon is common. In fact, Jean Schneider and Michel Chevreton (both at the Paris Observatory) analyzed this likely observational signal as far back as 1990 in a paper for Astronomy and Astrophysics. Now TESS has a circumbinary discovery of its own, despite its much shorter dwell time on the stars in its field. Adds Kostov:

“The occurrence of multiple closely-spaced transits during one orbit is a unique observation signature of transiting circumbinary planets. This is a geometrical phenomenon that provides a new planet detection method. The discovery of TIC 172900988b is the first demonstration that the method works.”

Image: This is Figure 5 from the paper. Caption: The photometric data shown in Figure 4 phase-folded on a linear period of P = 19.65802 days. The left panel shows the primary eclipse and the right panel shows the secondary eclipse. The different data sets are vertically offset in the lower panels for clarity. The phase change of the secondary eclipse relative to the primary—indicative of the apsidal motion of the binary—is clearly seen in the right panels. Credit: Kostov et al.

We learn in the paper’s analysis of the detection that no further data from TESS will become available on this planet, making future study the province of other instruments. From the paper:

We note that TESS will observe the target again in Sectors 44 through 47 (2021 October to 2022 January). Unfortunately, it will miss the predicted transits for the corresponding conjunctions by several weeks. Thus follow-up observations from other instruments are key for strongly constraining the orbit and mass of the CBP [circumbinary planet]. In particular, observing the predicted 2022 February-March conjunction of the CBP is critical for solving the currently-ambiguous orbit of the planet. As a relatively bright target (V = 10.141 mag), the system is accessible for high resolution spectroscopy, e.g. Rossiter-McLaughlin effect, transit spectroscopy. TIC 172900988 demonstrates the discovery potential of TESS for circumbinary planets with orbital periods greatly exceeding the duration of the observing window.