Looking for Plumes on Europa

A spray of organic molecules and ice particles bursting out of an outer system moon is an unforgettable sight, as Cassini showed us at Enceladus. Finding something similar at Europa would be a major help for future missions there, given the opportunity to sample a subsurface ocean that is perhaps as deep as 160 kilometers. But Lynnae Quick (NASA GSFC), who works on the science team that produced the Europa Imaging System cameras that will fly on the Europa Clipper mission, offers a cautionary note:

“A lot of people think Europa is going to be Enceladus 2.0, with plumes constantly spraying from the surface. But we can’t look at it that way; Europa is a totally different beast.”

A good thing that Europa Clipper can produce evidence of conditions beneath the ice without the need for plumes when it begins its explorations in 2031. In fact, adds Quick, every instrument aboard the spacecraft has its own role to play in the study of that global ocean. Still, potential plumes are too important to ignore, even if finding an active, erupting Europa would by no means be as straightforward as discovering the plumes of Enceladus. The Europa evidence we have indicates faint plume activity through Galileo and Hubble data and some Earth-based telescopes. 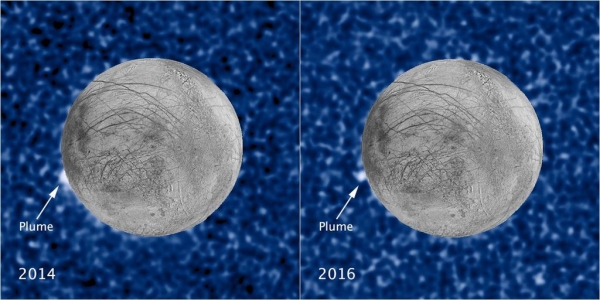 Image: These composite images show a suspected plume of material erupting two years apart from the same location on Jupiter’s icy moon Europa. The images bolster evidence that the plumes are a real phenomenon, flaring up intermittently in the same region on the satellite. Both plumes, photographed in ultraviolet light by NASA’s Hubble’s Space Telescope Imaging Spectrograph, were seen in silhouette as the moon passed in front of Jupiter. Credit: NASA/JPL.

In the image above, notice the possible plume activity. At left is a 2014 event that appears in Hubble data, a plume estimated to be 50 kilometers high. At the right, and in the same location, is an image taken two years later by the same Hubble Imaging Spectrograph, both events seen in silhouette as the moon passed in front of Jupiter. It’s noteworthy that this activity occurs at the same location as an unusually warm spot in the ice crust that turned up in Galileo mission data from the 1990s.

Let’s now cut to a second image, showing that Galileo find. Below we see the surface of Europa, focusing on what NASA calls a ‘region of interest.’ 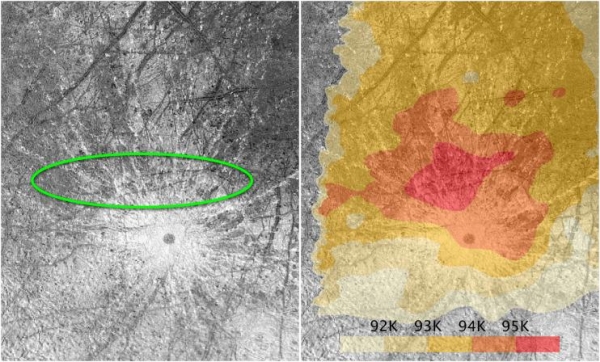 Image: The image at left traces the location of the erupting plumes of material, observed by NASA’s Hubble Space Telescope in 2014 and again in 2016. The plumes are located inside the area surrounded by the green oval. The green oval also corresponds to a warm region on Europa’s surface, as identified by the temperature map at right. The map is based on observations by the Galileo spacecraft. The warmest area is colored bright red. Researchers speculate these data offer circumstantial evidence for unusual activity that may be related to a subsurface ocean on Europa. The dark circle just below center in both images is a crater and is not thought to be related to the warm spot or the plume activity. Credit:
NASA/ESA/W. Sparks (STScI)/USGS Astrogeology Science Center.

Getting access to the realm below the surface would obviate the need to drill through kilometers of ice in some future mission, giving us a better understanding of possible habitability. An ocean churned by activity from heated rock below the seafloor could spawn the kind of life we find around hydrothermal vents here on Earth, circulating carbon, hydrogen, oxygen, nitrogen, phosphorus, and sulfur deep within. Moreover, Europa is in an elliptical orbit that generates internal heat and likely drives geology.

Does an icy plate tectonics also exist on this moon? The Europan surface is laced with cracks and ridgelines, with surface blocks having apparently shifted. Bands that show up in Galileo imagery delineate zones where fresh material from the underlying shell appears to have moved up to fill gaps as soon as they appear. A 2014 paper (citation below) by Simon Kattenhorn (University of Idaho – Moscow) and Louise Prockter (JHU/APL) found evidence of subduction in Galileo imagery, where one icy plate seems to have moved beneath another, forcing surface material into the interior.

That paper is, in fact, worth a quote. The italics are mine:

…we produce a tectonic reconstruction of geologic features across a 134,000 km2 region of Europa and find, in addition to dilational band spreading, evidence for transform motions along prominent strike-slip faults, as well as the removal of approximately 20,000 km2 of the surface along a discrete tabular zone. We interpret this zone as a subduction-like convergent boundary that abruptly truncates older geological features and is flanked by potential cryolavas on the overriding ice. We propose that Europa’s ice shell has a brittle, mobile, plate-like system above convecting warmer ice. Hence, Europa may be the only Solar System body other than Earth to exhibit a system of plate tectonics.

This is an encouraging scenario in which surface nutrients produced through interactions with radiation from Jupiter are driven into pockets in the ice shell and perhaps into the ocean below, even as chemical activity continues at the seafloor. If we find plumes, their chemical makeup could put these scenarios to the test. But as opposed to the highly visible plumes of Enceladus, any Europan plumes would be harder to detect, bound more tightly to the surface because of the higher Europan gravity, and certainly lacking the spectacular visual effects at Enceladus.

Key to the search for plumes will be Clipper’s EIS camera suite, which can scout for activity at the surface by scanning the limb of the moon as it passes in front of Jupiter. Moreover, a plume should leave a deposit on surface ice that EIS may see. Clipper’s Europa Ultraviolet Spectrograph (Europa-UVS) will look for plumes at the UV end of the spectrum, tracking the chemical makeup of any that are detected. The Europa Thermal Emission Imaging System (E-THEMIS) will be able to track hotspots that may indicate recent eruptions. A complete description of Clipper’s instrument suite is available here.

We’ve been using Galileo data for a long time now. It’s a refreshing thought that we’ll have two spacecraft – Europa Clipper and Jupiter Icy Moons Explorer (JUICE) – in place in ten years to produce what will surely be a flood of new discoveries.

The paper on Europan plate tectonics is Kattenhorn & Prockter, “Evidence for subduction in the ice shell of Europa,” Nature Geoscience 7 (2014), 762-767 (abstract).