The day is not far off when we’ll be able to look at a small planet in the habitable zone of its star and detect basic features on its surface: water, ice, land. The era of the 30-meter extremely large telescope approaches, so this may even be possible from the ground, and large space telescopes will be up to the challenge as well (which is why things like aperture size and starshade prospects loom large in our discussions of current policy decisions).

Consider this: On the Earth, while the atmosphere reflects a huge amount of light from the Sun, about half the total albedo at the poles comes from polar ice. It would be useful, then, to know more about the ice and land distribution that we might find on planets around other stars. This is the purpose of a new paper in the Planetary Science Journal recounting the creation of climate simulations designed to predict how surface ice will be distributed on Earth-like exoplanets. It’s a relatively simple model, the authors acknowledge, but one that allows rapid calculation of climate on a wide population of hypothetical planets. 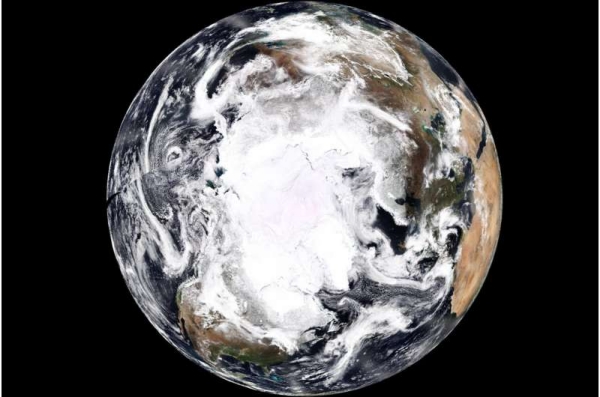 Image: A composite of the ice cap covering Earth’s Arctic region — including the North Pole — taken 512 miles above our planet on April 12, 2018 by the NOAA-20 polar-orbiting satellite. Credit: NOAA.

Lead author Caitlyn Wilhelm (University of Washington) began the work while an undergraduate; she is now a research scientist at the university’s Virtual Planet Laboratory:

“Looking at ice coverage on an Earth-like planet can tell you a lot about whether it’s habitable. We wanted to understand all the parameters—the shape of the orbit, the axial tilt, the type of star—that affect whether you have ice on the surface, and if so, where.”

Thus we attempt to cancel out imprecision in the energy balance model (EBM) the paper deploys by sheer numbers, looking for general patterns like the fraction of planets with ice coverage and the location of their icy regions. A ‘baseline of expectations’ emerges for planets modeled to be like the Earth (which in this case means a modern Earth), worlds of similar mass, rotation, and atmospherics. The authors simulate more than 200,000 such worlds in habitable zone orbits.

What is being modeled here is the flow of energy between equator and pole as it sets off climate possibilities for the chosen population of simulated worlds over a one million year timespan. These are planets modeled to be in orbit around stars in the F-, G- and K-classes, which takes in our G-class Sun, and all of them are placed in the habitable zone of the host star. The simulations take in circular as well as eccentric orbits, and adjust axial tilt from 0 all the way to 90 degrees. By way of contrast, Earth’s axial tilt is 23.5 degrees. That of Uranus is close to 90 degrees. The choice of axial tilt obviously drives extreme variations in climate.

But let’s pause for a moment on that figure I just gave: 23.5 degrees. Because factors like this are not fixed, and Earth’s obliquity, the tilt of its spin axis, actually isn’t static. It ranges between roughly 22 degrees and 24.5 degrees over a timescale of some 20,000 years. Nor is the eccentricity of Earth’s orbit fixed at its current value. Over a longer time period, it ranges between a perfectly circular orbit (eccentricity = zero) to an eccentricity of 6 percent. While these changes seem small enough, they have serious consequences, such as the ice ages.

Image: The three main variations in Earth’s orbit linked to Milankovitch cycles. The eccentricity is the shape of Earth’s orbit; it oscillates over 100,000 years (or 100 k.y.). The obliquity is the tilt of Earth’s spin axis, and the precession is the alignment of the spin axis. Credit: Scott Rutherford. A good entry into all this is Sean Raymond’s blog planetplanet, where he offers an exploration of life-bearing worlds and the factors that influence habitability. An astrophysicist based in Bordeaux, Raymond’s name will be a familiar one to Centauri Dreams readers. I should add that he is not involved in the paper under discussion today.

Earth’s variations in orbit and axial tilt are referred to as Milankovitch cycles, after Serbian astronomer Milutin Milanković, who examined these factors in light of changing climatic conditions over long timescales back in the 1920s. These cycles can clearly bring about major variations in surface ice as their effects play out. If this is true of Earth, we would expect a wide range of climates on planets modeled this way, everything from hot, moist conditions to planet-spanning ‘snowball’ scenarios of the sort Earth once experienced.

So it’s striking that even with all the variation in orbit and axial tilt and the wide range in outcomes, only about 10 percent of the planets in this study produced even partial ice coverage. Rory Barnes (University of Washington) is a co-author of the paper:

“We essentially simulated Earth’s climate on worlds around different types of stars, and we find that in 90% of cases with liquid water on the surface, there are no ice sheets, like polar caps. When ice is present, we see that ice belts—permanent ice along the equator—are actually more likely than ice caps.” 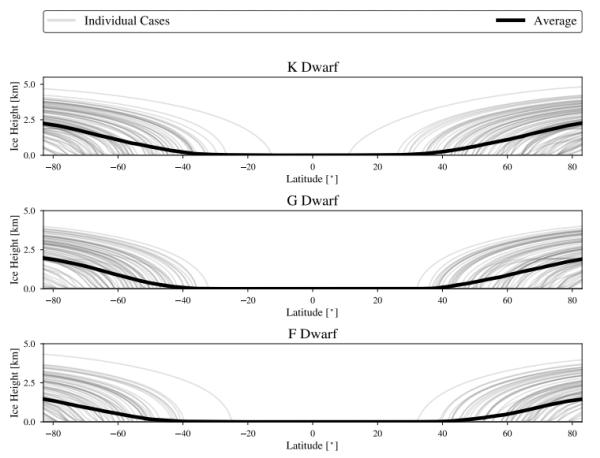 Image. This is Figure 12 from the paper. Caption: Figure 12. Range and average ice heights of ice caps as a function of latitude for stars orbiting F (top), G (middle) and K (bottom) dwarf stars. Note the different scales of the x-axes. Light grey curves show 100 randomly selected individual simulations, while black shows the average of all simulations that concluded with an ice belt. Although the averages are all symmetric about the poles, some individual ice caps are significantly displaced. Credit: Wilhelm et al.

Breaking this down, the authors show that in their simulations, planets like Earth are most likely to be ice-free. Even oscillations in orbital eccentricity and axial tilt do not prevent, however, planets orbiting the F-, G- and K-class stars in the study from developing stable ice belts on land. Moreover, ice belts turn out to be twice as common as polar ice caps for planets around G- and K-class stars. As to size, the typical extension of an ice belt is between 10 and 30 degrees, varying with host star spectral type, and this is a signal large enough to show up in photometry and spectroscopy, making it a useful observable for future instruments.

This is a study that makes a number of assumptions in the name of taking a first cut at the ice coverage question, each of them “…made in the name of tractability as current computational software and hardware limitations prevent the broad parameter sweeps presented here to include these physics and still be completed in a reasonable amount of wallclock time. Future research that addresses these deficiencies could modify the results presented above.”

Fair enough. Among the factors that will need to be examined in continued research, all of them spelled out here, are geochemical processes like the carbonate-silicate cycle, ocean heat transport as it affects the stability of ice belts, zonal winds and cloud variability, all of this not embedded in the authors’ energy balance model, which is idealized and cannot encompass the entire range of effects. Nor do the authors simulate the frequency and location of M-dwarf planet ice sheets.

But the finding about the lack of ice in so many of the simulated planets remains a striking result. Let me quote the paper’s summation of the findings. They remove the planets ending in a moist greenhouse or snowball planet, these worlds being “by definition, uninhabitable.” We’re left with this:

And note that bit about the uninhabitability of snowball worlds, which the paper actually circles back to:

Our dynamic cases highlight the importance of considering currently ice-covered planets as potentially habitable because they may have recently possessed open surface water. Such worlds could still develop life in a manner similar to Earth, e.g. in wet/dry cycles on land, but then the dynamics of the planetary system force the planet into a snowball, which in turn forces life into the ocean under a solid ice surface. Such a process may have transpired multiple times on Earth, so we should expect similar processes to function on exoplanets.