Into the Atmosphere of a Star

We’ve been learning about the solar wind ever since the first interplanetary probes began to leave our planet’s magnetosphere to encounter this rapidly fluctuating stream of plasma. Finding a way to harness the flow could open fast transport to the outer Solar System if we can cope with the solar wind’s variability – no small matter – but in any case learning as much as possible about its mechanisms furthers our investigation of possible propulsive techniques. On this score and for the sake of solar science, we have much reason to thank the Parker Solar Probe and its band of controllers as the spacecraft continues to tighten its approaches to the Sun.

The spacecraft’s repeated passes by the Sun, each closer than the last, take advantage of speed and a heat shield to survive each perihelion event, and the last for which we have data was noteworthy indeed. During it, the Parker Solar Probe moved three separate times into and out of the Sun’s corona. This is a region where magnetic fields dominate the movement of particles. The Alfvén critical surface, which the spacecraft repeatedly crossed, is the boundary where the solar atmosphere effectively ends and the solar wind begins. Solar material surging up from below reaches a zone where gravity and magnetic fields can no longer hold it back. Breaking free, the solar wind effectively breaks the connection with the solar corona once across the Alfvén boundary.

So, as with our Voyagers moving past the heliopause and into interstellar space, we’ve accomplished another boundary crossing of consequence. A crossing into and back out of the corona helps define the location of the Alfvén critical surface, which turns out to be close to earlier estimates. These targeted a range between 10 and 20 solar radii. In its most recent passes by the Sun, the Parker Solar Probe has been below 20 solar radii, and on April 28 of this year, at 18.8 solar radii, it penetrated the Alfvén surface.

“Flying so close to the Sun, Parker Solar Probe now senses conditions in the magnetically dominated layer of the solar atmosphere – the corona – that we never could before. We see evidence of being in the corona in magnetic field data, solar wind data, and visually in images. We can actually see the spacecraft flying through coronal structures that can be observed during a total solar eclipse.” 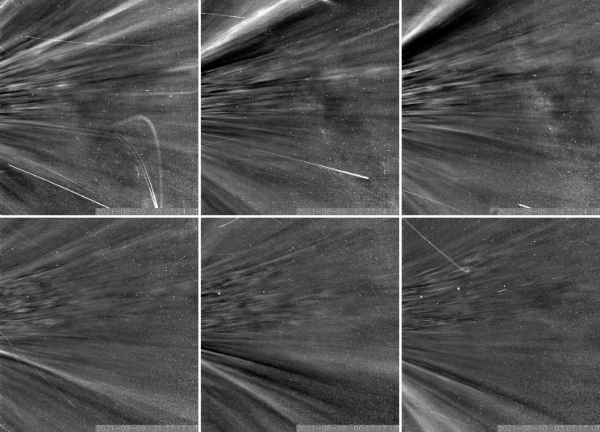 Image: As Parker Solar Probe passed through the corona on encounter nine, the spacecraft flew by structures called coronal streamers. These structures can be seen as bright features moving upward in the upper images and angled downward in the lower row. Such a view is only possible because the spacecraft flew above and below the streamers inside the corona. Until now, streamers have only been seen from afar. They are visible from Earth during total solar eclipses. Credit: NASA/Johns Hopkins APL/Naval Research Laboratory.

It’s clear from Parker data that the Alfvén surface is anything but smooth, and the spacecraft’s crossing into the corona did not in fact occur at perihelion on this particular pass, an indication of the varied structures within the region. As seen above, streamers and so-called pseudostreamers are found here, large magnetic-field structures streaming out of regions of the same magnetic polarity that are separated by an inner zone of opposite polarity. Caltech’s Christina M. S. Cohen explains the situation this way in a useful overview of the coronal crossing that notes the spacecraft’s fleeting passage through the boundary:

The center of a pseudostreamer is a region of enhanced magnetic field and reduced plasma density. This combination can push the Alfvén surface higher up in the corona, explaining why PSP’s orbit was able to cut across it…The period of time PSP spent below the Alfvén surface was too short to fully characterize the boundary and explore the inner region. Researchers expect that such a full characterization will require multiple expeditions carried out over different magnetic configurations and solar conditions.

It’s interesting to learn that we’re behind in acquiring data from the Parker Solar Probe because its high-gain antenna cannot be pointed toward Earth until it is far enough from the Sun on its current close pass to protect the equipment. Thus while the current data are from April of 2021, there was a likely crossing of the Alfvén critical surface again in November, when the probe reached a perihelion of 13.6 solar radii. This is close enough to suggest a longer period within the corona, something we won’t know until data download of that pass in late December. 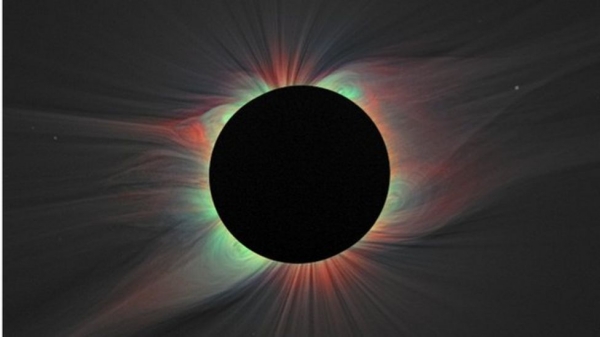 Image: The solar corona during a total solar eclipse on Monday, August 21, 2017, above Madras, Oregon. The red light is emitted by charged iron particles at 1 million degrees Celsius and the green are those at 2 million degrees Celsius. On April 28, 2021, NASA’s Parker Solar Probe crossed the so-called Alfvén surface, entering, for the first time, a part of the solar corona that is “magnetically dominated.” Credit: M. Druckmuller / Christina M. S. Cohen.

Just as the Alfvén critical surface is anything but smooth, so too is the solar wind full of structure as it moves into the realm of the planets. So-called switchbacks were first detected by the Ulysses probe in the 1990s, what NASA describes as “bizarre S-shaped kinks in the solar wind’s magnetic field lines” which deflect charged particle paths as they move away from the Sun. The Parker Solar Probe discovered just how common these switchbacks were back in 2019, with later data showing that at least some switchbacks originate in the photosphere.

Switchbacks also align with magnetic funnels that emerge out of the photosphere between the convection cell structures called supergranules. It may be, then, that we can trace the origins of the solar wind at least partially to these magnetic funnels, as Stuart Bale (University of California, Berkeley) suggests:

“The structure of the regions with switchbacks matches up with a small magnetic funnel structure at the base of the corona. This is what we expect from some theories, and this pinpoints a source for the solar wind itself. My instinct is, as we go deeper into the mission and lower and closer to the Sun, we’re going to learn more about how magnetic funnels are connected to the switchbacks.”

Whether switchbacks are produced by the process of magnetic reconnection at the boundaries of magnetic funnels, or are produced by moving waves of plasma, is a question scientists hope the Parker Solar Probe will be able to answer. Just how the solar wind connects to switchbacks may help to explain how the corona is heated to temperatures far above that of the solar surface below. Bear in mind that the corona itself will be expanding as the Sun goes through its normal eleven year activity cycle, so we’ll have more opportunities for the Probe to pass through it.

Parker will eventually reach 8.86 solar radii, a scant 6.2 million kilometers from the solar surface, so this is a story that is far from over. The next flyby will be in January of 2022.

Findings from the recent Parker Solar Probe milestone will be published in The Astrophysical Journal, and are also examined in a paper by Kasper et al., “Parker Solar Probe Enters the Magnetically Dominated Solar Corona,” Physical Review Letters 127 (14 December 2021), 255101 (abstract).

Next post: All Your Base Are Belong To Us! : Alien Computer Programs