As we begin the New Year, I want to be sure to catch up with the recent announcement of a discovery regarding ‘rogue’ planets, those interesting worlds that orbit no central star but wander through interstellar space alone (or, conceivably, with moons). Conceivably ejected from their host stars through gravitational interactions (more on this in a moment), such planets become interstellar targets in their own right, as given the numbers now being suggested, there may be rogue planets near the Solar System. 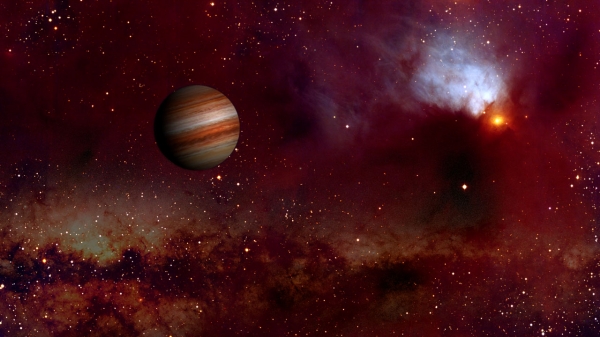 Image: Rogue planets are elusive cosmic objects that have masses comparable to those of the planets in our Solar System but do not orbit a star, instead roaming freely on their own. Not many were known until now, but a team of astronomers, using data from several European Southern Observatory (ESO) telescopes and other facilities, have just discovered at least 70 new rogue planets in our galaxy. This is the largest group of rogue planets ever discovered, an important step towards understanding the origins and features of these mysterious galactic nomads. Credit: /ESO/COSMIC-DANCE Team/CFHT/Coelum/Gaia/DPAC.

A brief digression on the word ‘interstellar’ in this context. I consider any mission outside the heliosphere to be interstellar, in that it takes the spacecraft into the interstellar medium. Our two Voyagers are in interstellar space – hence NASA’s monicker Voyager Interstellar Mission – even if not designed for it. The Sun’s gravitational influence extends much further, as the Oort Cloud attests, but the heliosphere marks a useful boundary, one that contains the solar wind within. The great goal, a mission from one star to another, is obviously the ultimate interstellar leap.

How many rogue planets may be passing through our galactic neighborhood? Without a star to illuminate them, they can and have been searched for via microlensing signatures. But the new work, in the hands of Hervé Bouy (Laboratoire d’Astrophysique de Bordeaux), uses data not just from the Very Large Telescope but other instruments in Chile including the adjacent VISTA (Visible and Infrared Survey Telescope for Astronomy), the VLT Survey Telescope and the MPG/ESO 2.2-metre telescope.

Tens of thousands of wide-field images went into the survey. The target: A star-forming region close to the Sun in the constellations Scorpius and Ophiuchus. The work takes advantage of the fact that planets that are young enough continue to glow brightly in the infrared, allowing us to go beyond microlensing methods to find them. About 70 potential rogue planets turn up in this survey. Núria Miret-Roig (Laboratoire d’Astrophysique de Bordeaux), first author of the paper on this work, comments:

“We measured the tiny motions, the colours and luminosities of tens of millions of sources in a large area of the sky. These measurements allowed us to securely identify the faintest objects in this region, the rogue planets…There could be several billions of these free-floating giant planets roaming freely in the Milky Way without a host star.” 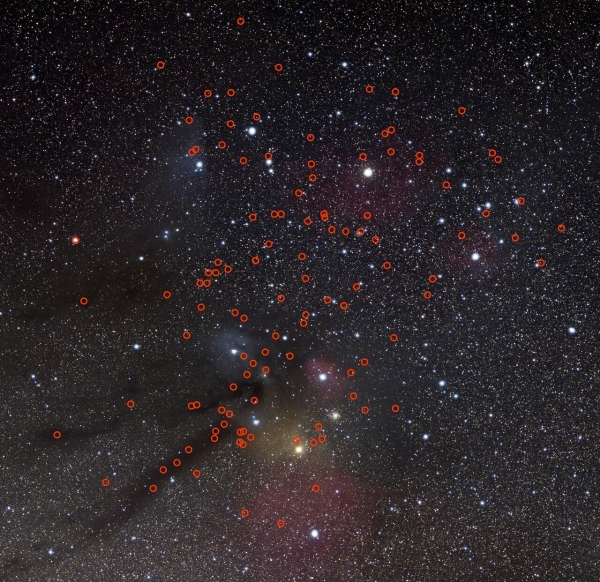 Image: The locations of 115 potential FFPs [free-floating planets] in the direction of the Upper Scorpius and Ophiuchus constellations, highlighted with red circles. The exact number of rogue planets found by the team is between 70 and 170, depending on the age assumed for the study region. This image was created assuming an intermediate age, resulting in a number of planet candidates in between the two extremes of the study. Credit: ESO/N. Risinger (skysurvey.org).

But we need to pause on the issue of stellar age. What these measurements lack is the ability to determine the mass of the discovered objects. Without that, we have problems distinguishing between brown dwarf stars – above 13 Jupiter masses – and planets. What Miret-Roig’s team did was to rely on the brightness of the objects in order to set upper limits on their numbers. Brightness varies with age, so that in older regions, brighter objects are likely above 13 Jupiter masses, while in younger ones, they are assumed to be below that value. The value is uncertain enough in the region in question to yield between 70 and 170 rogue planets.

Planet formation is likewise an interesting question here. I mentioned ejection from planetary systems above, but these free-floating planets are young enough to call that scenario into question. In fact, other mechanisms are discussed in the literature. The paper notes the possibility of core-collapse (a version of star formation), with the variant that a stellar embryo might be ejected from a star-forming nursery before building up sufficient mass to become a star. We need to build up our data on rogue planets to discover the relative contribution of each method to the population.

This work uncovers more rogue planets by a factor of seven than core-collapse models predict, making it likely that other methods are at work:

This excess of FFPs [free-floating planets] with respect to a log-normal mass distribution is in good agreement with the results reported in σ Orionis [a multiple system that is a member of an open cluster in Orion]. Interestingly, our observational mass function also has an excess of low-mass brown dwarfs and FFPs with respect to simulations including both core-collapse and disc fragmentation . This suggests that some of the FFPs in our sample could have formed via fast core-accretion in discs rather than disc fragmentation. We also note that the continuity of the shape of the mass function at the brown dwarf/planetary mass transition suggests a continuity in the formation mechanisms at work for these two classes of objects.

So the formation of rogue planets is considerably more complicated than I made it appear in my opening paragraph. The authors believe that ejection from planetary systems is roughly comparable to core-collapse as a planet formation model. That would imply that dynamical instabilities in exoplanet systems (at least, those containing gas giants) produce ejections frequently within the first 10 million years after formation. Investigating these extremely faint objects further will require the capabilities of future instrumentation like the Extremely Large Telescope.