A Continuum of Solar Sail Development

2020 GE is an interesting, and soon to be useful, near-Earth asteroid. Discovered in March of 2020 through the University of Arizona’s Catalina Sky Survey, 2020 GE is small, no more than 18 meters or so across, placing it in that class of asteroids below 100 meters in size that have not yet been examined up close by our spacecraft. Moreover, this NEA will, in September of 2023, obligingly make a close approach to the Earth, allowing scientists to get that detailed look through a mission called NEA Scout.

This is a mission we’ve looked at before, and I want to stay with it because of its use of a solar sail. Scheduled to be launched with the Artemis 1 test flight using the Space Launch System (SLS) rocket no earlier than March of this year, NEA Scout is constructed as a six-unit CubeSat, one that will be deployed by a dispenser attached to an adapter ring connecting the rocket with the Orion spacecraft. After separation, the craft will unfurl a sail of 86 square meters, deployed via stainless steel alloy booms. It is one of ten secondary payloads to be launched aboard the SLS on this mission.

“The genesis of this project was a question: Can we really use a tiny spacecraft to do deep space missions and produce useful science at a low cost? This is a huge challenge. For asteroid characterization missions, there’s simply not enough room on a CubeSat for large propulsion systems and the fuel they require.” 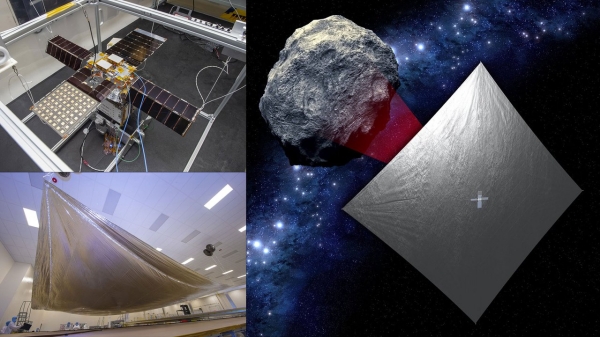 Image: NEA Scout is composed of a small, shoebox-sized CubeSat (top left) and a thin, aluminum-coated solar sail about the size of a racquetball court (bottom left). After the spacecraft launches aboard Artemis I, the sail will use sunlight to propel the CubeSat to a small asteroid (as depicted in the illustration, right). Credit: NASA.

A solar sail ought to be made to order if the objective is eventual high performance within the constraints of low mass and low volume. Reflecting solar photons and also using small cold-gas thrusters for maneuvers and orientation, NEA Scout will be investigating a near-Earth asteroid in a size range that is far more common than the larger NEAs we’ve thus far studied. It’s worth remembering that the Chelyabinsk impactor was about 20 meters in diameter, and in the same class as 2020 GE.

The 2023 close approach to Earth will occur at a time when NEA Scout will have used a gravitational assist from the Moon to alter its trajectory to approach the asteroid. Julie Castillo-Rogez, the mission’s principal science investigator at JPL, says that the spacecraft will achieve a slow flyby with relative speed of less than 30 meters per second. Using a camera with a resolution of 10 centimeters per pixel, scientists should be able to learn much about the object’s composition – a clump of boulders and dust (think Bennu, as investigated by OSIRIS-REx), or a solid object more like a boulder?

Bear in mind that NEA Scout fits into a continuum of solar sail development, with NASA’s Advanced Composite Solar Sail System (ACS3) the next to launch, demonstrating new, lightweight boom deployment techniques from a CubeSat. The unfurled square sail will be approximately 9 meters per side. As we haven’t looked at this one before, let me add this, from a NASA fact sheet:

The ACS3’s sails are supported and connected to the spacecraft by booms, which function much like a sailboat’s boom that connects to its mast and keeps the sail taut. The composite booms are made from a polymer material that is flexible and reinforced with carbon fiber. This composite material can be rolled for compact stowage, but remains strong and lightweight when unrolled. It is also very stiff and resistant to bending and warping due to changes in temperature. Solar sails can operate indefinitely, limited only by the space environment durability of the solar sail materials and spacecraft electronic systems. The ACS3 technology demonstration will also test an innovative tape-spool boom extraction system designed to minimize jamming of the coiled booms during deployment. 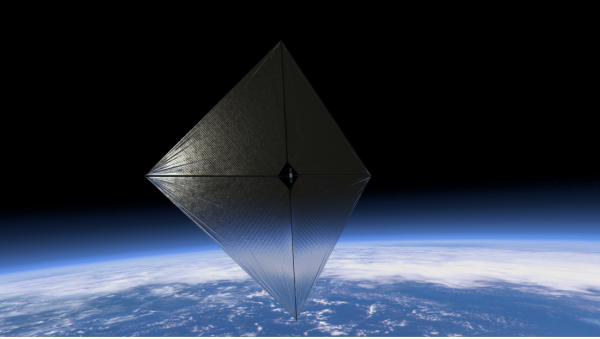 Image: An illustration of a completely unfurled solar sail measuring approximately 9 meters per side. Since solar radiation pressure is small, the solar sail must be large to efficiently generate thrust. Credit: NASA.

ACS3 is scheduled for liftoff later in 2022 as part of a rideshare mission on Rocket Lab’s Electron launch vehicle from its Launch Complex 1 in New Zealand. Beyond ACS3 looms Solar Cruiser, which takes the sail size up to 1,700 square meters in 2025, a mission we’ve looked at before and will continue to track as NASA attempts to launch the largest sail ever tested in space.

Next post: The Persistent Case for Exomoon Candidate Kepler-1708 b-i