I’m riffing on a Brian Aldiss title this morning, the reference being the author’s 1959 collection Galaxies Like Grians of Sand, which is a sequence of short stories spanning millions of years of Earth’s future (originally published as The Canopy of Time). But sand is appropriate for the exercise before us today, one suggested by memories of the day my youngest son told me he had to construct a model of an atom and we went hunting all over town for styrofoam balls. It turns out atoms are easy. 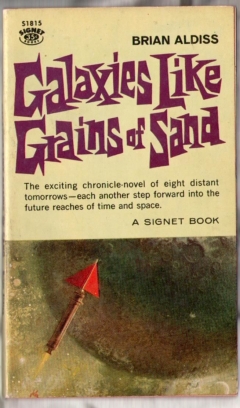 Suppose your child comes home with a project involving the creation of a scale model of the galaxy. Pondering the matter, you announce that grains of salt can stand in for stars. Sand might work as well, but salt is easier because you can buy boxes of salt at the grocery. So while your child goes outside to do other things, you and your calculator get caught up in the question of modeling the Milky Way. Just how much salt will you need?

Most models of the galaxy these days come in at a higher number than the once canonical 100 billion stars. In fact, 200 billion may be too low. But let’s economize by sticking with the lower number. So you need 100 billion grains of salt to make your scale model accurate. A little research reveals that the average box of Morton salt weighs in with about five million grains. Back to the calculator. You will need 20,000 boxes of salt to make this work. The local grocery doesn’t keep this much in stock, so you turn to good old Amazon, and pretty soon a semi has pulled up in front of your house with 20,000 blue boxes of salt.

But how to model this thing? I wouldn’t know where to begin, but fortunately JPL’s Rich Terrile thought the matter through some time back and he knows the answer. If we want to reflect the actual separation of stars just in the part of the galaxy we live in, we have to separate each grain of salt by eleven kilometers from any of its neighbors. Things get closer as we move in toward the bulge. Maybe your child has lots of friends to help spread the salt? Let’s hope so. And plenty of room to work with for the model.

I mention all this because I was talking recently with Nate Simpson, lead developer of Kerbal Space Program 2, and colleague Jon Cioletti. This is the next iteration of the remarkable spaceflight simulation game that offers highly realistic launch and orbital physics capabilities. We were talking deep space, and the salt box comparison came naturally, because these guys are also in the business of reaching a broader audience with extraordinary scales of time and space.

I strongly recommend Kerbal, by the way, because I suspect Kerbal Space Program has already turned the future career path of more than a few young players in the direction of aerospace, just as, say, science fiction novels or Star Trek inspired an earlier generation in that direction. Watching what develops as Kerbal goes into version 2 will be fascinating.

But I was also thinking about the salt box analogy because it can be so difficult to get interstellar distances across to the average person, who may know on some level that a galaxy is a very big place, but probably doesn’t have that deep awe that a real acquaintance with the numbers delivers. I think about craft trying to navigate these immensities, and also about objects like ‘Oumuamua and 2I/Borisov, the first two known interstellar objects we have detected. What vast oceans of interstellar space such tiny objects have drifted through! Clearly, as our ability to observe them grows, we’ll find many more such objects, and one of these days we’ll get a mission off to study one up close (probably designed by Andreas Hein and team). 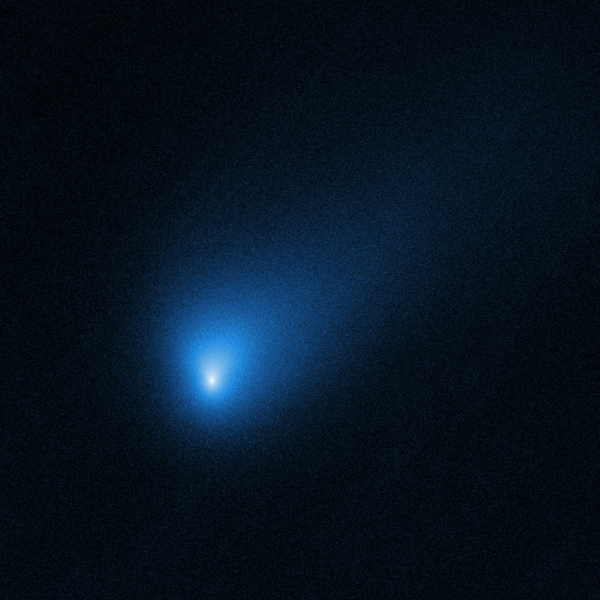 Image: This Hubble Space Telescope image of 2I/Borisov shows the first observed rogue comet, a comet from interstellar space that is not gravitationally bound to a star. It was discovered in 2019 and is the second identified interstellar interloper, after ‘Oumuamua. 2I/Borisov looks a lot like the traditional comets found inside our solar system, which sublimate ices, and cast off dust as they are warmed by the Sun. The wandering comet provided invaluable clues to the chemical composition, structure, and dust characteristics of planetary building blocks presumably forged in an alien star system. It’s rapidly moving away from our Sun and will eventually head back into interstellar space, never to return. Credit: NASA, ESA, and D. Jewitt (UCLA).

I was heartened to learn over the weekend that the James Webb Space Telescope will likely have a role to play in further detection efforts. Indeed, there is now a Webb Target of Opportunity program that homes in on just such discoveries. Here is how a Target of Opportunity is defined on the JWST website:

A target for JWST observation is deemed a Target of Opportunity (ToO) if it is associated with an event that may occur at an unknown time, and in this way ToOs are distinct from time constrained observations.

Sounds made to order for interstellar interlopers. But we can add this:

ToO targets include objects that can be identified in advance, but which undergo unpredictable changes (e.g., some dwarf novae), as well as objects that can only be identified in advance by class (e.g., novae, supernovae, gamma ray bursts, newly discovered comets, etc.). ToOs are generally not suitable for observations of periodic phenomena (e.g., eclipsing binary stars, transiting planets, etc.). ToO proposals must provide a clear definition of the trigger criteria and present a detailed plan for the observations to be performed in the technical justification of the PDF submission if the triggering event occurs. A ToO activation may consist of a single observation or of a set of observations executed with a pre-specified cadence.

Martin Cordiner (NASA GSFC/Catholic University of America) is principal investigator of the Webb Target of Opportunity program to study the composition of an interstellar object:

“The supreme sensitivity and power of Webb now present us with an unprecedented opportunity to investigate the chemical composition of these interstellar objects and find out so much more about their nature: where they come from, how they were made, and what they can tell us about the conditions present in their home systems, The ability to study one of these and find out its composition — to really see material from around another planetary system close up — is truly an amazing thing.” 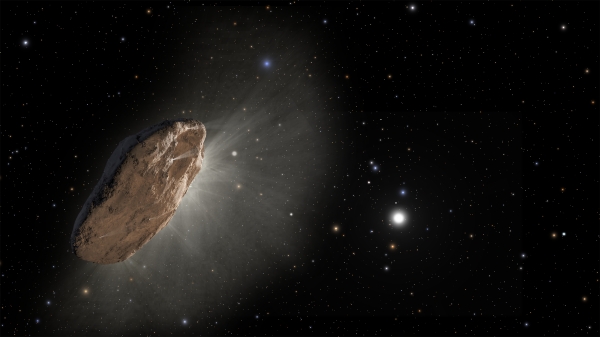 Image: This artist’s illustration shows one take on the first identified interstellar visitor, 1I/’Oumuamua, discovered in 2017. The wayward object swung within 38 million kilometers of the Sun before racing out of the solar system. 1I/’Oumuamua still defies any simple categorization. It did not behave like a comet, and it had a variety of unusual characteristics. As the complex rotation of the object made it difficult to determine the exact shape, there are many models of what it could look like. Credit: NASA, ESA, and J. Olmsted and F. Summers (STScI).

When astronomers detect another interstellar interloper, they’ll first need to confirm that it’s on a hyperbolic orbit, and if JWST is to come into play, that its trajectory intersects with the telescope’s viewing field. If that’s the case, Cordiner’s team will use JWST’s Near-Infrared Spectrograph (NIRSpec) to examine gasses released by the object due to the Sun’s heat. The spectral resolution available here should allow the detection of molecules ranging from water, methanol, formaldehyde and carbon dioxide to carbon monoxide and methane. The Mid-infrared instrument (MIRI) will track any dust or solid particles produced by the object.

The near- and mid-infrared wavelength ranges will be used to examine interstellar interlopers for the first time with this program, making this fertile ground for new discoveries. The assumption being that such objects exist in vast numbers, the Webb Target of Opportunity program should find material to work with, and likely soon, especially given JWST’s ability to detect incoming objects at extremely faint magnitudes. Are most such discoveries likely to be comet-like, or do we have the possibility of finding other objects as apparently anomalous as ‘Oumuamua?