Delving into the Interstellar Sail

One of the benefits of a project like Breakthrough Starshot is that it moves the ball forward in terms of the academic research that underpins advances in technologies. I seriously doubt that Starshot will result in an Alpha Centauri probe reaching these stars within the next 50 years, given among other things the conundrum of data retrieval from a fleet of chip-sized micro-craft. But we all gain from the fact that scientists are tackling these issues in a well-funded and coordinated way. The research library grows.

As a field, interstellar studies has always been resource-starved, not to mention winning scant attention among the larger community of scientists and engineers at conferences and in publications. But it has drawn on a consistent thread of interest that now gains new energies. That benefits the entire effort. And let’s not forget the power of looking far into the future to get a conception of what we can do with scaled-down projects in the near term, as for example Andrew Higgins’ laser-fed fast missions to Mars.

Starshot, of course, takes the laser concept into the interstellar realm, using a massive ground-based array that would likely be based in Chile’s Atacama Desert. The laser array is used to push meter-scale sails, making Starshot’s committee on sail design a major component of the effort. The infusion of funding into sail technologies is welcome, as it leads to new insights into a sail’s shape, its size and its materials. 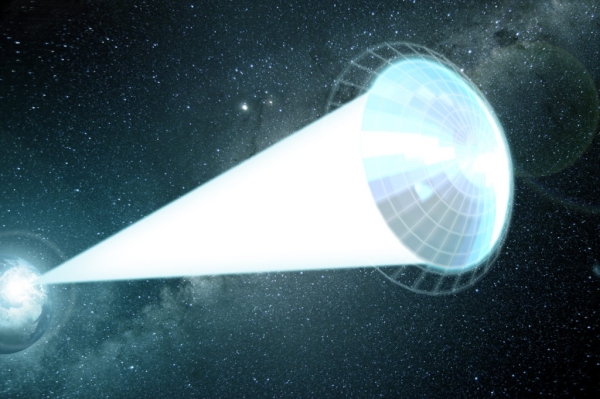 Image: An artist’s conception of the Starshot Lightsail spacecraft during acceleration by a ground-based laser array. Previous conceptions of lightsails have imagined them being passively pushed by light from the sun, but Starshot’s laser-based approach requires rethinking the sail’s shape and composition so it won’t melt or tear during acceleration. Credit: Masumi Shibata, courtesy of Breakthrough Initiatives.

Thus the significance of Igor Bargatin’s work. An associate professor at the University of Pennsylvania in the Department of Mechanical Engineering and Applied Mechanics, Bargatin and colleagues at the university as well as at UCLA have just published two papers going through fundamental sail issues and specifications. Remember that the projected sails, perhaps three-meters wide and a thousand times thinner than a sheet of paper, are to be subjected to a light intensity millions of times that of the Sun.

The team sees these sails as being made of ultrathin sheets of aluminum oxide and molybdenum disulfide, constructed in a parachute shape rather than a flat surface. The structure would be about as deep as it is wide, allowing the greatest ability under these calculations of withstanding the strain of the sudden acceleration, which is expected to reach tens of thousands of g’s. A ‘billowing’ sail should hold up to the strain better than a tight, flat one, providing a surface that is more resistant to tears.

Matthew Campbell is a postdoctoral researcher in Bargatin’s group and lead author of the paper covering the sail’s shape:

“Laser photons will fill the sail much like air inflates a beach ball. And we know that lightweight, pressurized containers should be spherical or cylindrical to avoid tears and cracks. Think of propane tanks or even fuel tanks on rockets.” 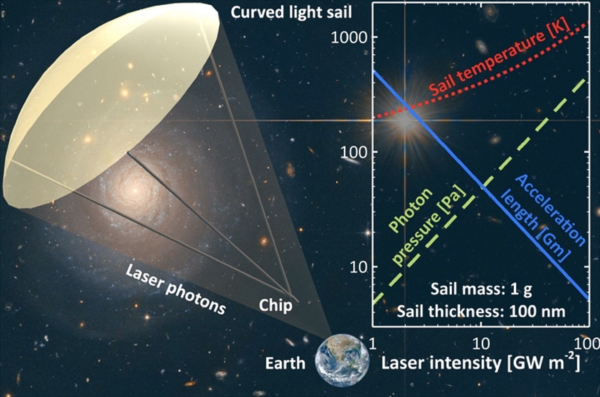 Image: Campbell et al. show that the diameter and radius of curvature of a circular light sail should be comparable in magnitude, both on the order of a few meters, in optimal designs for gram-scale payloads. Credit: Campbell et al.

The second paper, led by UCLA engineer Aaswath Raman, examines sail materials, offering insights into how heat will be dissipated under the powerful laser beam. Here the idea is to use nano-scale patterning within the material to manage the heat. Says Raman:

“If the sails absorb even a tiny fraction of the incident laser light, they’ll heat up to very high temperatures. To make sure they don’t just disintegrate, we need to maximize their ability to radiate their heat away, which is the only mode of heat transfer available in space.”

While earlier research maximized heat dissipation through a photonic crystal design that deployed regularly spaced holes in the sail material, the new work suggests adding a grid-like pattern for the ‘fabric,’ with the spacing of the holes matching the wavelength of light, and the swatches of sail material forming the grid spaced to match the wavelength of the thermal emission. The result is a stronger sail, one that could endure a higher initial thrust and therefore need less time under the beam.

The mathematics involved here is of a complexity far above my pay grade. I’ll have to send you to the paper for the details. But I think we can visualize the sail internals as a kind of ‘scaffolding’ that is apparent in the image below. The reference to ‘Mie resonant features’ in the caption to this image points to the work of Gustav Mie, who described what we now call ‘Mie scattering,’ showing the behavior of light of various wavelengths as it strikes particular kinds of structures. Mie resolved the intricate mathematics of these interactions. 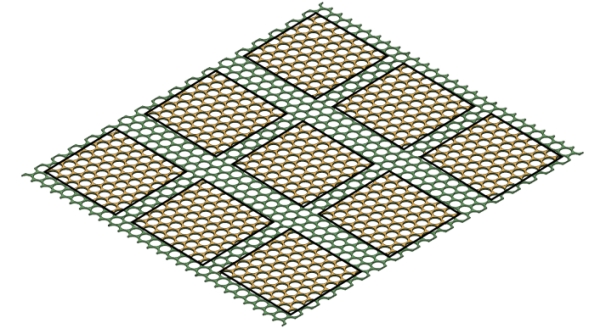 Image: This is Figure S4 from the paper. Caption: Continuous Mie structure design. The black outlines serve to highlight the positions of the Mie resonant features against the continuous reflective green layer, but would not exist in the actual design. Credit: Brewer et al.

UCLA’s Deep Jariwala, who was involved with both papers, comments:

“A few years ago, even thinking or doing theoretical work on this type of concept was considered far-fetched. Now, we not only have a design, but the design is grounded in real materials available in our labs. Our plan for the future would be to make such structures at small scales and test them with high-power lasers.”

Thus the theoretical work continues. Exactly when it pays off in hardware and actual missions is something we cannot know.