The continuing release of papers related to or referring to the Breakthrough Starshot sail concept is good news for the entire field. Interstellar studies as an academic discipline has never had this long or sustained a period of activity, and the growing number of speakers at space-related conferences attests to the current vitality of starflight among professionals and the general public alike.

Not all interstellar propulsion concepts involve laser-beaming, of course, and we’ll soon look at what some would consider an ever more exotic concept. But today I’m focusing on a paper from Ho-Ting Tung and Artur Davoyan, both in the Mechanical and Aerospace Engineering Department at UCLA. You could say that these two researchers are filling in some much needed space between the full-bore interstellar effort of Breakthrough Starshot, the Solar System-oriented laser work of Andrew Higgins’ team at McGill, and much smaller, near-term experiments we could run not so far from now.

Of the many potential show-stoppers faced by a mission to another star at our stage of development is the need to develop the colossal laser array envisioned by Starshot. The Higgins array is at a smaller scale, as befits a concept with nearby targets like Mars. What Tung and Davoyan envision are tiny payloads (here they parallel Breakthrough), some no more than a gram in mass, but the authors push the sail with a 100 kW array about a meter in size. Compare this with Breakthrough’s need for a gigantic square-kilometer array of 10 kW lasers with a combined output of up to 100 GW. 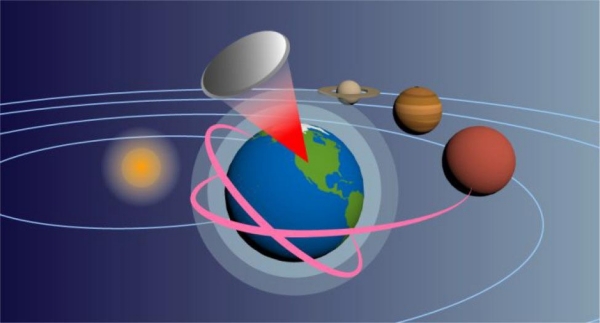 Image: In this illustration, a low-power laser (red cone) on Earth could be used to shift the orbit (red lines) of a small probe (grey circle), or propel it at rapid speeds to Neptune and beyond. Credit: Ho-Ting Tung et al.

The UCLA work takes us to a consideration of operations with spacecraft in Earth orbit as well as payloads sent on interplanetary trajectories. Thus we are in the realm of the kind of missions that today would demand chemical or electric propulsion, and we are looking at a system that might be used, for example, for orbital adjustment of Earth satellites after launch, or in the case of chip-class payloads, interplanetary missions with surprising velocities, up to 5 times that of New Horizons. As noted, the needed laser aperture is, by the standards of the missions we’ve discussed earlier, small:

…a sail with w = 1 m would require a laser with an aperture D ≃ 26 m (compare with the 30 m diameter primary mirror of the Thirty Meter Telescope under construction). However, we stress that most practical scenarios are limited to low and medium Earth orbits that require a much shorter operation range (z ≤ 1000km), and therefore a significantly smaller laser array.

Indeed, an array a meter in size could be efficient, maneuvering small satellites in Earth orbit, or being used to bring small chip-craft up to Solar System escape velocity. Thus we have the potential to create laser propulsion experiments and missions with array powers of ≥ 100 kW and array sizes that do not require kilometers of desert for their construction. Payloads can range from 1 to 100 grams depending on the mission, though the focus here is wafer-scale, on the order of 10 centimeters.

As to sail materials, the authors calculate that for maximum reflectivity coupled with rapid cooling, silicon nitride and boron nitride are the materials of choice:

The paper offers possible ways to create these structures, including using metamaterials formed into nanostructured architectures with nanometer-scale ‘sandwich’ panels between material layers, or using ‘micro pillars’ within the photonic structure.

The broader picture is that we’re mapping out how to experiment with lasers and materials that may begin moving up the ladder of mission complexity. There are innumerable issues to be overcome, but the early theoretical work is crucial to making what may become an interplanetary infrastructure a reality. These examinations should also feed into the ambitious work on projects that aim at interstellar missions.