Why is it so difficult to detect planets around Alpha Centauri? Proxima Centauri is one thing; we’ve found interesting worlds there, though this small, dim star has been a tough target, examined through decades of steadily improving equipment. But Centauri A and B, the G-class and K-class central binary here, have proven impenetrable. Given that we’ve found over 4500 planets around other stars, why the problem here?

Proximity turns out to be a challenge in itself. Centauri A and B are in an orbit around a common barycenter, angled such that the light from one will contaminate the search around the other. It’s a 79-year orbit, with the distance between A and B varying from 35.6 AU to 11.2. You can think of them as, at their furthest, separated by the Sun’s distance from Pluto (roughly), and at their closest, by about the distance to Saturn.

The good news is that we have a window from 2022 to 2035 in which, even as our observing tools continue to improve, the parameters of that orbit as seen from Earth will separate Centauri A and B enough to allow astronomers to overcome light contamination. I think we can be quite optimistic about what we’ll find within the decade, assuming there are indeed planets here. I suspect we will find planets around each, but whether we find something in the habitable zone is anyone’s guess.

Image: This is Figure 1 from today’s paper. Caption: (a) Trajectories of α-Cen A (red) and B (blue) around their barycenter (cross). The two stars are positioned at their approximate present-day separation. The Hill spheres (dashed circles) and HZs (nested green circles) of A and B are drawn to scale at periapsis. (b) The apparent trajectory of B centered on A, with indications of their apparent separation on the sky over the period from CE 2020 to 2050. The part of trajectory in yellow indicates the coming observational window (CE 2022–2035) when the apparent separation between A and B is larger than 6 and the search for planets around A or B can be conducted without suffering significant contamination from the respective companion star. Credit: Wang et al.

If we don’t yet have a planet detection around the binary Centauri stars, we continue to explore the possibilities even as the search continues. Thus a new paper from Haiyang Wang (ETH Zurich), who along with colleagues at the university has been modeling the kind of rocky planet in the habitable zone that we hope to find there. The idea is to create the benchmarks that predict what this world should look like.

The numerical modeling involved examines the composition of the hypothetical world, drawing on what we do know, based on spectroscopic measurements, of the chemical composition of Centauri A and B. Here there is a great deal of information to work with, especially on so-called refractory elements, the iron, magnesium and silicon that go into rock formation. Centauri A and B are among the Gaia “benchmark stars” for which stellar properties have been carefully calibrated, and up to 22 elements have been found in high-quality spectra, so we know a lot about their chemical makeup.

But a key issue remains. While rocky planets are known to have rock and metal chemical compositions similar to that of their host stars, there is no necessary correspondence when it comes to the readily vaporized volatile elements. The authors suggest that this is because the process of planetary formation and evolution quickly does away with key telltale volatiles.

The researchers thus develop their own ‘devolatilization model’ to project the possible composition of a supposed habitable zone planet around Centauri A and B, linking stellar composition with both volatile and refractory elements. The model grew out of Wang’s work with Charley Lineweaver and Trevor Ireland at the Australian National University in Canberra, and it continues at Wang’s current venue at ETH. This is fundamentally new ground that extends our notions of exoplanet composition.

Wang and team call their imagined world ‘a-Cen-Earth,’ delving into its internal structure, mineralogy and atmospheric composition, all factors in evolution and habitability. The findings reveal a planet that is geochemically similar to Earth, with a silicate mantle, although carbon-bearing species like graphite and diamond are enhanced. Water storage in the interior is roughly the same as Earth, but the deduced world has a somewhat larger iron core mixed with a possible lack of plate tectonics. Indeed, “…the planet may be in a Venus-like stagnant-lid regime, with sluggish mantle convection and planetary resurfacing, over most of its geological history.”

As to the atmosphere of the hypothetical world that grows out of Wang’s model, its early era shows an envelope rich in carbon dioxide, methane and water, which harks back to the Earth’s atmosphere in the Archean era, between 4 and 2.5 billion years ago. That gives life a promising start if we assume abiogenesis occurring in a similar environment. 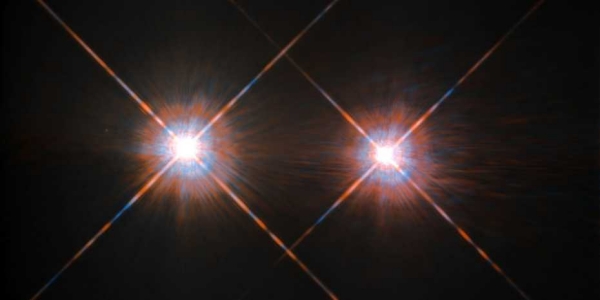 Image: α Centauri A (left) and α Centauri B viewed by the Hubble Space Telescope. At a distance of 4.3 light-​years, the α Centauri group (which includes also the red dwarf α Centauri C) is the nearest star system to Earth. Credit: ESA/Hubble & NASA.

How far can we take a model like this? We may soon have data to measure it against, but it’s worth remembering what the paper’s authors point out. After noting that planets around the “Sun-like” Centauri A and B cannot be extrapolated from the already known planets around the red dwarf Proxima Centauri, they go on to say:

Second, although α Cen A and B are “Sun-like” stars, their metallicities are ∼72% higher than the solar metallicity (Figure 3). How this difference would affect the condensation/evaporation process, and thus the devolatilization scale, is the subject of ongoing work (Wang et al. 2020b).

That’s a big caveat and a useful pointer to the needed clarification that further work on the matter should bring – metallicity is obviously significant. The paper adds:

Third, we ignore any potential effect of the “binarity” of the stars on their surrounding planetary bulk chemistry during planet formation, even though we highlight that, dynamically, the planetary orbits in the HZ around either companion are stable. Finally, we have yet to explore a larger parameter space, e.g., in mass and radius, but have only benchmarked our analysis with an Earth-sized planet, which would otherwise have an impact on the interior modeling…

So we’re in early days with planet modeling using these methods, which are being examined and extended through the team’s collaborations at Switzerland’s National Centre of Competence in Research PlanetS. Note too that the authors do not inject any catastrophic impact into their model of the sort that could affect both a planet’s mantle and/or its atmosphere, with dramatic consequences for the outcome. We know from the Earth’s experience in the Late Heavy Bombardment that this can be a factor.

With all this in mind, it’s fascinating to see the lines of observation and theory converging on the Alpha Centauri binary pair. Finding a habitable zone planet around Proxima Centauri was exhilarating. How much more so to go beyond the many imponderables of red dwarf planet habitability to two stars much more like our Sun, each of which might have a planet in its habitable zone? The Alpha Centauri triple system may turn out to be a bonanza, showing us both red dwarf and Sun-like planetary outcomes in a single system that just happens to be the closest to us.

Previous post: Why Fill a Galaxy with Self-Reproducing Probes?