Methane as Biosignature: A Conceptual Framework

A living world around another star will not be an easy catch, no matter how sophisticated the coming generation of space- and ground-based telescopes turns out to be. It’s one thing to develop the tools to begin probing an exoplanet atmosphere, but quite another to be able to say with any degree of confidence that the result we see is the result of biology. When we do begin picking up an interesting gas like methane, we’ll need to evaluate the finding against other atmospheric constituents, and the arguments will fly about non-biological sources for what might be a biosignature.

This is going to begin playing out as the James Webb Space Telescope turns its eye on exoplanets, and methane is the one potential sign of life that should be within its range. We know that oxygen, ozone, methane and carbon dioxide are produced through biological activity on Earth, and we also know that each can be produced in the absence of life. The simultaneous presence of such gases is what would intrigue us most, but the opening round of biosignature detection will be methane. Here I’ll quote Maggie Thompson, who is a graduate student in astronomy and astrophysics at UC Santa Cruz and lead author of a new study on methane in exoplanet atmospheres:

“Oxygen is often talked about as one of the best biosignatures, but it’s probably going to be hard to detect with JWST. We wanted to provide a framework for interpreting observations, so if we see a rocky planet with methane, we know what other observations are needed for it to be a persuasive biosignature.”

The problem of interpretation is huge, given how numerous are the sources of methane. The study Thompson is discussing has just appeared in Proceedings of the National Academy of Sciences, addressing a wide range of phenomena from volcanic activity, hydrothermal vents, tectonic subduction zones to asteroid or comet impacts. There are many ways to produce methane, but because it is unstable in an atmosphere and easily destroyed by photochemical reactions, it needs to be replenished to remain at high levels. Thus the authors look for clues as to how that replenishment works and how to distinguish these processes from signs of life. 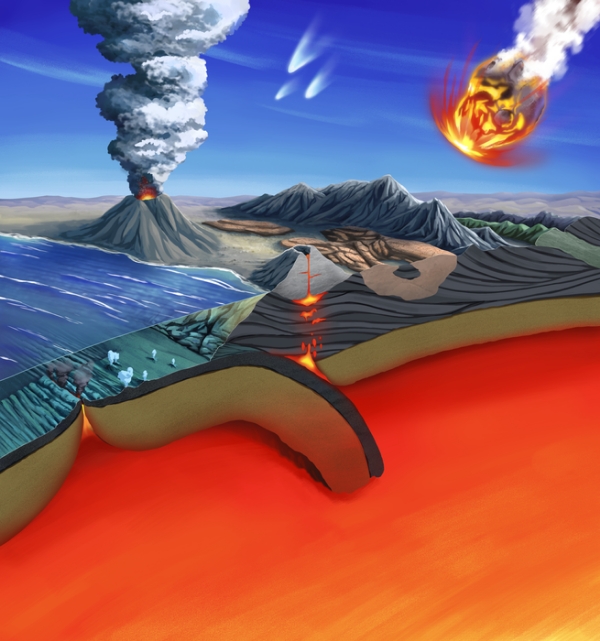 Image: Methane in a planet’s atmosphere may be a sign of life if non-biological sources can be ruled out. This illustration summarizes the known abiotic sources of methane on Earth, including outgassing from volcanoes, reactions in settings such as mid-ocean ridges, hydrothermal vents, and subduction zones, and impacts from asteroids and comets. Credit: © 2022 Elena Hartley.

Current methods for studying exoplanet atmospheres rely upon analyzing the light of the host star during a transit as it passes through the planet’s atmosphere, the latter absorbing some of the starlight to offer clues to its composition. To do this well, we need relatively quiet stars with little flare activity. M-dwarfs are great targets for this kind of work because of their small size, so that the transit depth of a rocky planet in the habitable zone will be relatively large and the signal stronger. It’s also useful that small red stars represent as much as 80% of all stars in the galaxy (for a deep dive into this question, see Alex Tolley’s Red Dwarfs: Their Impact on Biosignatures).

Context will be the key in the hunt for biosignatures, with false positives a persistent danger. Outgassing volcanoes should add not only methane but also carbon monoxide to the atmosphere, while biological activity should consume carbon monoxide. The authors argue that it would be difficult for non-biological processes to produce an atmosphere rich in both methane and carbon dioxide with little carbon monoxide.

Thus a small, rocky world in the habitable zone will need to be evaluated in terms of its geochemistry and its geological processes, not to mention its interactions with its host star. Find atmospheric methane here and it is more likely to be an indication of life if the atmosphere also shows carbon dioxide and the methane is more abundant than carbon monoxide and the planet is not extremely rich in water. The paper is an attempt to build a framework for distinguishing not just false positives, but identifying real biosignatures that may be easy to overlook.

Making the process even more complex is the fact that the scope of abiotic methane production on a planetary scale is not fully understood. Even so, the authors argue that while various abiotic mechanisms can replenish methane, it is hard to produce a methane flux comparable to Earth’s biogenic flux without creating clues that signal a false positive. Here we’re at the heart of things; let me quote the paper:

…we investigated whether planets with very reduced mantles and crusts can generate large methane fluxes via magmatic outgassing and assessed the existing literature on low-temperature water-rock and metamorphic reactions, and, where possible, determined their maximum global abiotic methane fluxes. In every case, abiotic processes cannot easily produce atmospheres rich in both CH4 and CO2 with negligible CO due to the strong redox disequilibrium between CO2 and CH4 and the fact that CO is expected to be readily consumed by life. We also explored whether habitable-zone exoplanets that have large volatile inventories like Titan could have long lifetimes of atmospheric methane. We found that, for Earth-mass planets with water mass fractions that are less than ∼1 % of the planet’s mass, the lifetime of atmospheric methane is less than ∼10 Myrs, and observational tools can likely distinguish planets with larger water mass fractions from those with terrestrial densities.

Let’s also recall that when searching for biosignatures, terms like ‘Earth-like’ are easy to misuse. Today’s atmosphere is a mix of nitrogen, oxygen and carbon dioxide, but we know that over geological time, the atmosphere has changed profoundly. The early Earth would have been shrouded in hydrogen and helium, with volcanic eruptions producing carbon dioxide, water vapor and sulfur. The oxygenation event that occurred two and a half billion years ago brought oxygen levels up. We thus have to remember where a given exoplanet may be in its process of development as we evaluate it.

So by all means let’s hope we one day find something like a simultaneous detection of oxygen and methane, two gases that ought not to co-exist unless there were a sustaining process (life) to keep them present. An out of equilibrium chemistry is intriguing, because life wants to throw chemical stability out of whack. And by all means let’s accelerate our work in the direction of biosignature analysis to root out those false positives. We begin with methane because that is what JWST can most readily detect.

And as to the question of ambiguity in life detection, JWST is not likely able to detect atmospheric oxygen and ozone, nor will it be a reliable source on water vapor, so its ability to make the call on habitability is limited. Going forward, the authors think that if the instrument detects significant methane and carbon dioxide and can constrain the ratio of carbon monoxide to methane, this will serve as a motivator for future instruments like ground-based Extremely Large Telescopes to follow up these observations. It will take observational tools in combination to nail down methane as a biosignature, but the ELTs should be well placed to take the next step forward.