Toward a Multilayer Interstellar Sail

Centauri Dreams tracks ongoing work on beamed sails out of the conviction that sail designs offer us the best hope of reaching another star system within this century, or at least, the next. No one knows how this will play out, of course, and a fusion breakthrough of spectacular nature could shift our thinking entirely – so, too, could advances in antimatter production, as Gerald Jackson’s work reminds us. But while we continue the effort on all alternative fronts, beamed sails currently have the edge.

On that score, take note of a soon to be available two-volume set from Philip Lubin (UC-Santa Barbara), which covers the work he and his team have been doing under the name Project Starlight and DEEP-IN for some years now. This is laser-beamed propulsion to a lightsail, an idea picked up by Breakthrough Starshot and central to its planning. The Path to Transformational Space Exploration pulls together Lubin and team’s work for NASA’s Innovative Advanced Concepts office, as well as work funded by donors and private foundations, for a deep dive into where we stand today. The set is expensive, lengthy (over 700 pages) and quite technical, definitely not for casual reading, but those of you with a nearby research library should be aware of it.

Just out in the journal Communications Materials is another contribution, this one examining the structure and materials needed for a lightsail that would fly such a mission. Giovanni Santi (CNR/IFN, Italy) and team are particularly interested in the question of layering the sail in an optimum way, not only to ensure the best balance between efficiency and weight but also to find the critical balance between reflectance and emissivity, because we have to build a sail that can survive its acceleration.

What this boils down to is that we are assuming a laser phased array producing a beam that is applied to an extremely thin, lightweight structure, with the intention of reaching a substantial percentage (20 percent) of lightspeed. The laser flux at the spacecraft is, the paper notes, on the order of 10 – 100 GW m-2, with the sail no further from the Earth than the Moon. Lubin’s work at UC-Santa Barbara (he is a co-author here) has demonstrated a directed energy source with emission at 1064 nm.

Thermal issues are critical. The sail has to survive the temperature increases of the acceleration phase, so we need materials that offer high reflectance as well as the ability to blow off that heat, meaning high emissivity in the infrared. The Santa Barbara laboratory work has used ytterbium-doped fiber laser amplifiers in what the paper describes as a ‘master oscillator phased array’ topology. And this gets fascinating from the relativistic point of view. Remember, we are trying to produce a spacecraft that can make the journey to a nearby star in a matter of decades, so relativistic effects have to be considered.

In terms of the sail itself, that means that our high-speed spacecraft will quickly see a longer wavelength in the beamed energy than was originally emitted. This is true despite the fact that the period of acceleration is short, on the order of minutes.

The authors suggest that there are two ways to cope with this. The laser can shorten its emission wavelength as the spacecraft accelerates, meaning that the received wavelength is constant. But the paper focuses on a second option: Make the reflecting surface broadband enough to allow a fairly large range of received wavelengths.

Thus the core of this paper is an analysis of the materials possible for such a sail and their thermal properties, keeping this wavelength change in mind, while at the same time studying – after the operative laser wavelength is determined – how the structure of the lightsail can be engineered to survive the extremities of the acceleration phase. 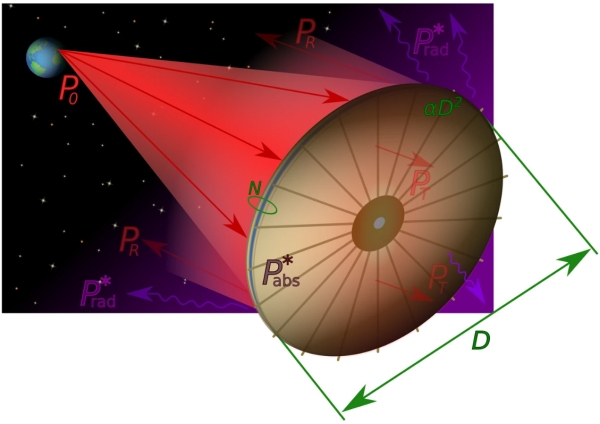 Image: This is Figure 1 from the paper. Caption: The red arrows denote the incident, transmitted and reflected laser power, while the violet ones indicate the thermal radiation leaving the structure from the front and back surfaces. The surface area is modeled as αD2; α = 1 for a squared lightsail of side D and α = π/4 for a circular lightsail of diameter D. Credit: Santi et al.

The paper considers a range of possible materials for the sail, all of them low in density and widely used, so that their optical parameters are readily available in the literature. Optimization is carried out for stacks of different materials in combination to find structures with maximum optical properties and highest performance. Critical parameters are the reflectance and the areal density of the resulting sail.

Out of all this, titanium dioxide (TiO2) stands out in terms of thermal emission. This work suggests a combination of stacked materials:

The most promising structures to be used with a 1064 nm laser source result to be the TiO2-based ones, in the form of single layer or multilayer stack which include the SiO2 as a second material. In term of propulsion efficiency, the single layer results to be the most performing, while the multilayers offer some advantages in term[s] of thermal control and stiffness. The engineering process is fundamental to obtain proper optical characteristics, thus reducing the absorption of the lightsail in the Doppler-shifted wavelength of the laser in order to allow the use of high-power laser up to 100 GW. The use of a longer wavelength laser source could expand the choice of potential materials having the required optical characteristics.

So much remains to be determined as this work continues. The required mechanical strength of the multilayer structure means we need to learn a lot more about the properties of thin films. Also critical is the stability of the lightsail. We want a sail that survives acceleration not only physically but also in terms of staying aligned with the axis of the beam that is driving it. The slightest imperfection in the material, induced perhaps in manufacturing, could destroy this critical alignment. A variety of approaches to stability have emerged in the literature and are being examined.

The take-away from this paper is that thin-film multilayers are a way to produce a viable sail capable of being accelerated by beamed energy at these levels. We already have experience with thin films in areas like the coatings deposited on telescope mirrors, and because the propulsion efficiency is only slightly affected by the angle at which the beam strikes the sail, various forms of curved designs become feasible.

Can a sail survive the rigors of a journey through the gas and dust of the interstellar medium? At 20 percent of c, the question of how gas accumulates in materials needs work, as we’d like to arrive at destination with a sail that may double as a communications tool. Each of these areas, in turn, fragments into needed laboratory work on many levels, which is why a viable effort to design a beamed mission to a star demands a dedicated facility focusing on sail materials and performance. Breakthrough Starshot seems ideally placed to make such a facility happen.

Previous post: AB Aurigae b: The Case for Disk Instability