I’m always interested in studies that cut across conventional boundaries, capturing new insights by applying data from what had appeared, at first glance, to be unrelated disciplines. Thus the news that the ice shell of Europa may turn out to be far more dynamic than we have previously considered is interesting in itself, given the implications for life in the Jovian moon’s ocean, but also compelling because it draws on a study that focused on Greenland and originally sought to measure climate change.

The background here is that the Galileo mission that gave us our best views of Europa’s surface so far showed us that there are ‘double ridges’ on the moon. In fact, these ridge pairs flanked by a trough running between them are among the most common landforms on a surface packed with troughs, bands and chaos terrain. The researchers, led by Stanford PhD student Riley Culberg, found them oddly familiar. Culberg, whose field is electrical engineering (that multidisciplinary effect again) found an analog in a similar double ridge in Greenland, which had turned up in ice-penetrating radar data.

Image: This is Figure 1 from the paper. Caption: a Europan double ridge in a panchromatic image from the Galileo mission (image PIA00589). The ground sample distance is 20 m/pixel. b Greenland double ridge in an orthorectified panchromatic image from the WorldView-3 satellite taken in July 2018 (© 2018, Maxar). The ground sample distance is ~0.31 m/pixel. Signatures of flexure are visible along the ridge flanks, consistent with previous models for double ridges underlain by shallow sills. Credit: Culberg et al.

The feature in Greenland’s northwestern ice sheet has an ‘M’-shaped crest, possibly a version in miniature of the double ridges we see on Europa. The climate change work used airborne instrumentation producing topographical and ice-penetrating radar data via NASA’s Operation IceBridge, which studies the behavior of polar ice sheets over time and their contribution to sea level rise. Where this gets particularly interesting is that flowing ice sheets produce such things as lakes beneath glaciers, drainage conduits and surface melt ponds. Figuring out how and when these occur becomes a necessary part of working with the dynamics of ice sheets.

The mechanism in play, analyzed in the paper, involves ice fracturing around a pocket of pressurized liquid water that was refreezing inside the ice sheet, creating the distinctive twin peak shape. Culberg notes that the link between Greenland and Europa came as a surprise:

“We were working on something totally different related to climate change and its impact on the surface of Greenland when we saw these tiny double ridges – and we were able to see the ridges go from ‘not formed’ to ‘formed… In Greenland, this double ridge formed in a place where water from surface lakes and streams frequently drains into the near-surface and refreezes. One way that similar shallow water pockets could form on Europa might be through water from the subsurface ocean being forced up into the ice shell through fractures – and that would suggest there could be a reasonable amount of exchange happening inside of the ice shell.” 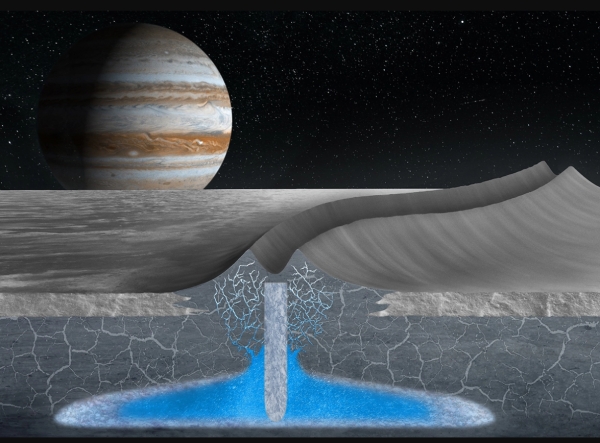 Image: This artist’s conception shows how double ridges on the surface of Jupiter’s moon Europa may form over shallow, refreezing water pockets within the ice shell. This mechanism is based on the study of an analogous double ridge feature found on Earth’s Greenland Ice Sheet. Credit: Justice Blaine Wainwright.

The double ridges on Europa can be dramatic, reaching nearly 300 meters at their crests, with valleys a kilometer wide between them. The idea of a dynamic ice shell is supported by evidence of water plumes erupting to the surface. Thinking about the shell as a place where geological and hydrological processes are regular events, we can see that exchanges between the subsurface ocean and the possible nutrients accumulating on the surface may occur. The mechanism, say the researchers, is complex, but the Greenland example provides the model, an analog that illuminates what may be happening far from home. It also provides a radar signature that future spacecraft should be able to search for.

Altogether, our observations provide a mechanism for subsurface water control of double ridge formation that is broadly consistent with the current understanding of Europa’s ice-shell dynamics and double ridge morphology. If this mechanism controls double ridge formation at Europa, the ubiquity of double ridges on the surface implies that liquid water is and has been a pervasive feature within the brittle lid of the ice shell, suggesting that shallow water processes may be even more dominant in shaping Europa’s dynamics, surface morphology, and habitability than previously thought.

So we have a terrestrial analog of a pervasive Europan feature, providing us with a hypothesis we can investigate with instruments aboard both Europa Clipper and the ESA’s JUICE mission (Jupiter Icy Moons Explorer), launching in 2024 and 2023 respectively. Confirming this mechanism on Europa would go a long way toward moving the Jovian moon still further up our list of potential life-bearing worlds.