Interstellar Implications of the Electric Sail

Not long ago we looked at Greg Matloff’s paper on von Neumann probes, which made the case that even if self-reproducing probes were sent out only once every half million years (when a close stellar encounter occurs), there would be close to 70 billion systems occupied by such probes within a scant 18 million years. Matloff now considers interstellar migration in a different direction in a new paper addressing how M-dwarf civilizations might expand, and why electric sails could be their method.

It’s an intriguing notion because M-dwarfs are by far the most numerous stars in the galaxy, and if we learn that they can support life, they might house vast numbers of civilizations with the capability of sending out interstellar craft. They’re also crippled in terms of electromagnetic flux when it comes to conventional solar sails, which is why the electric sail comes into play as a possible alternative, here analyzed in terms of feasibility and performance and its prospects for enabling interstellar migration.

The term ‘sail’ has to be qualified. By convention, I’ve used ‘solar sail,’ for example, to describe sails that use the momentum imparted by stellar photons – Matloff often calls these ‘photon sails,’ which is also descriptive, though to my mind, a ‘photon sail’ might describe both a beam-driven as well as a stellar photon-driven sail. Thus I prefer ‘lightsail’ for the beamed sail concept. In any case, we have to distinguish all these concepts from the electric sail, which operates on fundamentally different principles.

In our Solar System, a sail made of absorptive graphene deployed from 0.1 AU could achieve a Solar System escape velocity of 1000 kilometers per second, and perhaps better if the mission were entirely robotic and not dealing with fragile human crews. The figure seems high, but Matloff gave the calculations in a 2012 JBIS paper. The solar photon sail wins on acceleration, and we can use the sail material to provide extra cosmic ray shielding enroute. These are powerful advantages near our own Sun.

But the electric sail has advantages of its own. Rather than drawing on the momentum imparted by solar photons (or beamed energy), an electric sail rides the stellar wind emanating from a star. This stream of charged particles has been measured in our system (by the WIND spacecraft in 1995) as moving in the range of 300 to 800 kilometers per second at 1 AU, a powerful though extremely turbulent and variable force that can be applied to a spacecraft. Because an interstellar craft entering a destination system would also encounter a stellar wind, an electric sail can be deployed for deceleration, something both forms of sail have in common.

How to harness a stellar wind? Matloff first references a 2008 paper from Pekka Janhunen (Finnish Meteorological Institute) and team that described long tethers (perhaps reaching 20 kilometers in length) extended from the spacecraft, each maintaining a steady electric potential with the help of a solar-powered electron gun aboard the vehicle. As many as a hundred tethers — these are thinner than a human hair — could be deployed to achieve maximum effect. While the solar wind is far weaker than solar photon pressure, an electric sail of this configuration with tethers in place can create an effective solar wind sail area of several square kilometers.

We need to maintain the electric potential of the tethers because it would otherwise be compromised by solar wind electrons. The protons in the solar wind – again, note that we’re talking about protons, not photons – reflect off the tethers to drive us forward. 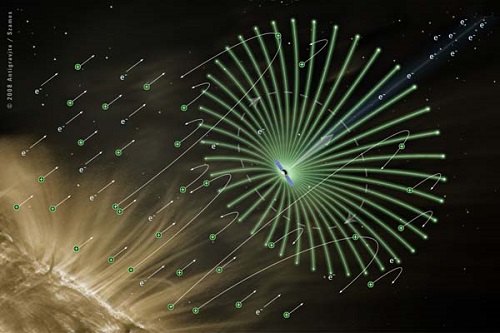 Image: Image of an electric sail, which consists of a number (50-100) of long (e.g., 20 km), thin (e.g., 25 microns) conducting tethers (wires). The spacecraft contains a solar-powered electron gun (typical power a few hundred watts) which is used to keep the spacecraft and the wires in a high (typically 20 kV) positive potential. The electric field of the wires extends a few tens of meters into the surrounding solar wind plasma. Therefore the solar wind ions “see” the wires as rather thick, about 100 m wide obstacles. A technical concept exists for deploying (opening) the wires in a relatively simple way and guiding or “flying” the resulting spacecraft electrically. Credit: Artwork by Alexandre Szames. Caption via Pekka Janhunen/Kumpula Space Center.

For interstellar purposes, we look at much larger spacecraft, bearing in mind that once in deep space, we have to turn off the electron gun, because the interstellar medium can itself decelerate the sail. Operating from a Sun-like star, the electric sail generation ship Matloff considers is assumed to have a mass of 107 kg, assuming a constant solar wind within the heliosphere of 600 kilometers per second. The variability of the solar wind is acknowledged, but the approximations are used to simplify the kinematics. The paper then goes on to compare performance near the Sun with that near an M-dwarf star.

We wind up with some interesting conclusions. First of all, an interstellar mission from a G-class star like our own would be better off using a different method. We can probably reach an interstellar velocity of as high as 70 percent of this assumed constant solar wind velocity (Matloff’s calculations), but graphene solar sails can achieve better numbers. And if we add in the variability of the solar wind, we have to be ready to constantly alter the enormous radius of the electric field to maintain a constant acceleration. If we’re going to send generation ships from the Sun, we’re most likely to use solar sails or beamed lightsails.

But things get different when we swing the discussion around to red dwarf stars. In The Electric Sail and Its Uses, I described a paper from Avi Loeb and Manasvi Lingam in 2019 that studied electric sails using the stellar winds of M-dwarfs, with repeated encounters with other such stars to achieve progressively higher speeds. Matloff agrees that electric sails best photon sails in the red dwarf environment, but adds useful context.

Let’s think about generation ships departing from an M-dwarf. Whereas the electromagnetic flux from these stars is far below that of the Sun, the stellar wind has interesting properties. We learn that it most likely has a higher mass density (in terms of rate per unit area) than the Sun, and the average stellar wind velocity is 500 kilometers per second. Presumably a variable electric field aboard the craft could adjust to maintain acceleration as the vehicle moves outward from the star, although the paper doesn’t get into this. The author’s calculations show an acceleration, for a low-mass spacecraft about 1 AU from the Sun, of 7.6 × 10−3 m/s2 , or about 7.6 × 10−4 g. Matloff considers this a reasonable acceleration for a worldship.

So while low electromagnetic pressure makes photon sails far less effective at M-dwarfs as opposed to larger stars, electric sails remain in the mix for civilizations willing to contemplate generation ships that take thousands of years to reach their goal. In an earlier paper, the author considered close stellar encounters, pointing out that 70,000 years ago, the binary known as Scholz’s Star (it has a brown dwarf companion) passed within 52,000 AU of the Sun. We can expect another close pass (Gliese 710) in about 1.35 million years, this one closing to a perihelion of 13,365 AU. From the paper:

Bailer‐Jones et al. have used a sample of 7.2 million stars in the second Gaia data release to further investigate the frequency of close stellar encounters. The results of this analysis indicate that seven stars in this sample are expected to approach within 0.5 parsecs of the Sun during the next 15 million years. Accounting for sample incompleteness, these authors estimate that about 20 stars per million years approach our solar system to within 1 parsec. It is, therefore, inferred that about 2.5 encounters within 0.5 parsecs will occur every million years. On average, 400,000 years will elapse between close stellar encounters, assuming the same star density as in the solar neighborhood.

If interstellar missions were only attempted during such close encounters, we still have a mechanism for a civilization to use worldships to expand into numerous nearby stellar systems. It would take no more than a few star-faring civilizations around the vast number of M-dwarfs to occupy a substantial fraction of the Milky Way, even without the benefits of von Neumann style self-reproduction. With the number of planetary systems occupied doubling every 500,000 years, and assuming a civilization only sends out a worldship during close stellar encounters, we get impressive results. In the clip below, n = the multiple of 500,000 years. The number of systems occupied is P:

At the start, n = 0 and P = 1. When 500,000 years have elapsed, the hypothetical spacefaring civilization makes the first transfer, n = 1 and P = 2. After one million years (n = 2), both the original and occupied stellar systems experience a close stellar encounter, migration occurs and P = 4. After a total elapsed time of 1.5 million years, n = 3 and they occupy eight planetary systems. When n = 5, 10 and 20 the hypothetical civilization has respectively occupied 32, 1024 and 1,048,576 planetary systems.

With M-dwarfs being such a common category of star, learning more about their systems’ potential habitability will have implications for the possible spread of technological societies, even assuming propulsion technologies conceivable to us today. What faster modes may eventually become available we cannot know.

The paper is Matloff, “The Solar‐Electric Sail: Application to Interstellar Migration and Consequences for SETI,” Universe 8(5) (19 April 2022), 252 (full text). The Lingam and Loeb paper is “Electric sails are potentially more effective than light sails near most stars,” Acta Astronautica Volume 168 (March 2020), 146-154 (abstract).