Toward Kardashev Type I

It seems a good time to re-examine the venerable Kardashev scale marking how technological civilizations develop. After all, I drop Nikolai Kardashev’s name into articles on a regular basis, and we routinely discuss whether a SETI detection might be of a particular Kardashev type. The Russian astronomer first proposed the scale in 1964 at the storied Byurakan conference on radio astronomy, and it has been discussed and extended as a way of gauging the energy use of technological cultures ever since.

The Jet Propulsion Laboratory’s Jonathan Jiang, working with an international team of collaborators, spurs this article through a new paper that analyzes when our culture could reach Kardashev Type I, so let’s remind ourselves of just what Type I means. Kardashev wanted to consider how a civilization consumes energy, and defined Type I as being at the planetary level, with a power consumption of 1016 watts. 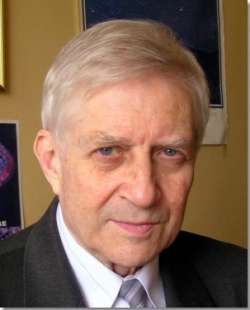 This approximates a civilization using all the energy available from its home planet, but that means both in terms of indigenous planetary resources as well as incoming stellar energy. So we are talking about everything from what we can pull from the ground – fossil fuels – or extract from planetary resources like wind and tide, or harvest through solar, nuclear and other technologies. If we maximize all this, it becomes fair to ask where we are right now, and when we can expect to reach the Type I goal.

If the Kardashev scale seems arbitrary, it was in its time a step forward in the discussion of SETI, which in 1964 was an emerging discipline much discussed at Byurakan, for the different Kardashev types would clearly present different signatures to a distant astronomer. Type I might well be all but undetectable depending on its uses of harvested energy; in any case, it would be harder to spot than Types II and III, whose vast sources of power could result in stronger signals or observable artifacts.

Carl Sagan was concerned enough about Kardashev’s original definitions to refine them into a calculation, his thinking being that the gaps between the Kardashev types needed to be filled in with finer gradations. This would allow us to quantify where civilizations are on the scale. Sagan’s calculation would let us discover the present value for our own civilization using available data (as, for example, from the International Energy Agency) regarding the planet’s total energy capabilities. According to Jiang and team, in 2018 this amounted to 1.90 X 1013W, all of which, via Sagan’s methodology, takes us to a present value of Kardashev 0.728.

But let’s circle back to the other two Kardashev types. Type II can be considered a stellar civilization, which in Kardashev’s thinking means a ten orders of magnitude increase in power consumption over Type I, taking us to 1026W. Here we are using all the energy released by the parent star, and now the idea of Dysonian SETI swings into view, the notion that this kind of consumption could be observable through engineering projects on a colossal scale, such as a Dyson swarm enclosing the parent star to maximize energy collection or a Matrioshka Brain for computation. Jiang reminds us that the Sun’s total luminosity is on the order of 4 X 1026W.

Again, these are arbitrary distinctions; note that at the level of the Sun’s total energy output, we would need only about a fourth of that figure to reach the figure described in the Kardashev Scale as Type II. Quantitative limitations, as noted by Sagan, beset the scale, but there is nothing wrong with the notion of setting up a framework for analysis as a first cut into what might become SETI observables. Kardashev’s Type III, using these same methods, offers up a galactic energy consumption of 1036W, so now an entire galaxy is being manipulated by a civilization.

Consider that the entire Milky Way yields something like 4 X 1037W, which actually means that a Type III culture on the Kardashev scale in our particular galaxy would have command of at least 2.5 percent of the total possible energy sources therein. What such a culture might look like as an observable is anyone’s guess (searches for galaxies with unusual infrared signatures are one way to proceed, as Jason Wright’s team at Penn State has demonstrated), but on the galactic scale, we are at an energy level that may, as the saying goes, be all but indistinguishable from magic.

Let’s back down to our planetary level, and in fact back to our modest 0.728 percent of Type I status. Just when can we anticipate reaching Type I? The new paper eschews simple models of exponential growth and consumption over time, noting that such estimates have tended to be:

…the result of a simple exponential growth model for calculating total energy production and consumption as a function of time, relying on a continuous feedback loop and absent detailed consideration of practical limitations. With this reservation in mind, its prediction for when humanity will reach Type I civilization status must be regarded as both overly simplified and somewhat optimistic.

Instead, the authors consider planetary resources, policies and suggestions on climate change, and forecasts for energy consumption to develop an estimated timeframe. The idea is to achieve a more practical outlook on the use of energy and the limitations on its growth. They consider the wide range of fossil fuels, from coal, peat, oil shale, and natural gas to crude oil, natural gas liquids and feedstocks, as well as the range of nuclear and renewable energy sources. Their analysis is keyed to how usage may change in the near future under the influence of, and taking in the projections of, organizations like the United Nations Framework Convention on Climate Change and the International Energy Agency. They see moving along a trajectory to Type I as inevitable and critical for resolving existential crises that threaten our civilization.

So, for example, on the matter of fossil fuels, the authors consider the downside of environmental concerns over the greenhouse effect and changes to policy affecting carbon emissions that will impact energy production. On nuclear and renewable energy, their analysis takes in factors constraining the growth of these energy sources and data on the current development of each. For both fossil fuels and nuclear/renewables, they produce what they describe as an ‘influenced model’ that predicts development operating under historically observed constraints and the likely consequences.

Applying the formula for calculating the Kardashev scale developed by Carl Sagan, they project that our civilization can attain Kardashev Type I with coal, natural gas, crude oil, nuclear and renewable energy sources as the driver. Thus their Figure 6: 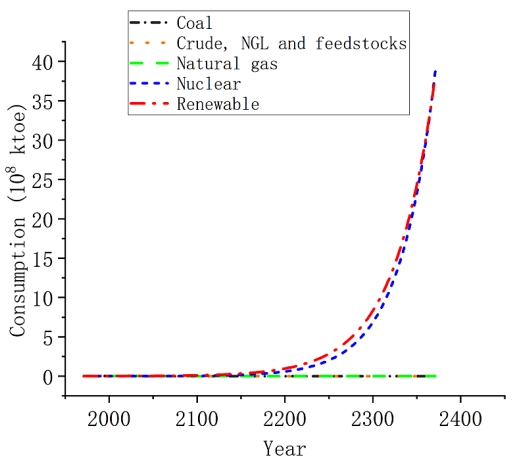 Image: Figure 6 from the paper. Caption: The energy supply in the influenced model. Note: Coal is minimal for 1971-2050 and largely coincides with the Natural gas line. Credit: Jiang et al.

Again referring to the Sagan equation, the paper continues:

A final revisit of Eq 1.1, which is informed by the IEA and UNFCCC’s suggestions, finds an imperative for a major transition in energy sourcing worldwide, especially during the 2030s. Although the resultant pace up the Kardashev scale is very low and can even be halted or reversed in the short term, achieving this energy transformation is the optimal path to assuring we will avoid the environmental pitfalls caused by fossil fuels. In short, we will have met the requirements for planetary stewardship while continuing the overall advancement of our technological civilization.

The final estimate is that humanity reaches Kardashev Type I by 2371, a date the authors consider on the optimistic side but achievable. All this assumes that a Type I civilization can be sustained as well, rather than backsliding into an earlier state, something that human history suggests is by no means assured. Successful management of nuclear power is just one flash point, as is storage and disposal of nuclear waste and global issues like deforestation and declining soil pH. That list could, of course, be extended into global pandemics, runaway AI and other factors.

…for the entire world population to reach the status of a Kardashev Type I civilization we must develop and enable access to more advanced technology to all responsible nations while making renewable energy accessible to all parts of the world, facilitated by governments and private businesses. Only through the full realization of our mutual needs and with broad cooperation will humanity acquire the key to not only avoiding the Great Filter but continuing our ascent to Kardashev Type I, and beyond.

The Great Filter, drawing on Robin Hanson’s work, could be behind us or ahead of us. Assuming it lies ahead, getting through it intact would be the goal of any growing civilization as it finds ways to juggle its technologies and resources to survive. It’s hard to argue with the idea that how we proceed on the Kardashev arc is critical as we summon up the means to expand off-world and dream of pushing into the Orion Arm.

The paper is Jiang et al., “Avoiding the Great Filter: Predicting the Timeline for Humanity to Reach Kardashev Type I Civilization” (preprint).