A liquid water-defined habitable zone is a way of establishing parameters for life as we know it around other stars, and with this in mind, scientists study the amount of stellar radiation a planet receives as one factor in making the assessment. But of course, not everything in a habitable zone is necessarily habitable, as our decidedly uninhabitable Moon makes all too clear. Atmospheric factors and tectonic activity, for example, have to be weighed as we try to learn what the actual temperature at the surface would be. We’re learning as we go about other contributing factors.

A problem of lesser visibility in the literature, though perhaps just as crucial, is whether a given planet can stay habitable on timescales of billions of years. This is where an interesting new paper from Cayman Unterborn (Southwest Research Institute) and colleagues enters the mix. A key question in the view of these researchers is whether carbon dioxide, the greenhouse gas whose ebb and flow on our world is determined by the carbonate-silicate cycle, can come into play to stabilize climatic conditions.

The carbonate-silicate cycle involves delivering CO2 to the atmosphere through degassing in the planetary mantle or crust, with carbon returned as carbonates to the mantle. The effects on climate are substantial and changes to the cycle can be catastrophic in terms of habitability. If weathering sufficiently draws down the concentration of CO2 in the atmosphere, for example, the planet can tilt in the direction of a ‘snowball’ state. So we need active degassing to keep the cycle intact, and the question becomes, how long can a planet’s mantle maintain this degassing?

Volcanic activity and tectonic processes, in turn, are powered by internal heat, and there we note the fact that a planetary heat budget decreases with time, affected by many things, one of which is the presence of radiative decay. Thorium, potassium and uranium have to be available in sufficient quantities, powering mantle convection, which gives us movement from a planetary core all the way to the crust. And radioactive elements, by their nature, decay with time. They are also not evenly distributed from one stellar system to another. If we’re looking for planets something like our own, in other words, let’s learn what we can about their radiogenic heat.

Not that this is the only factor involved in a planet’s heat budget, but it’s an effect that may account for, the authors say, from thirty to fifty percent of the Earth’s current surface heat flow (because of radioactive decay, the current flow represents only 20 percent of the Earth’s heat budget when it formed four and a half billion years ago).

The authors mention other planetary heat sources, as we’ll see below, but confine themselves in this paper to radiogenic heat. Their method: To estimate the distribution of these heat-producing elements by examining stellar composition as determined by spectroscopic data, using this as a proxy for the composition of planets. They combine this information with chemical evolution models for the galaxy at large. They then produce models of thermal evolution that maximize the cooling rate in a planetary mantle, resulting in what the authors call “a pessimistic estimate of lifetime a rocky, stagnant-lid exoplanet can support a global carbon cycle through Galactic history.”

Seventeen exoplanets are subjected to this framework in the paper, all with measured ages. Seven of these, the researchers predict, should be actively outgassing today. Says Unterborn:

“Using host stars to estimate the amount of these elements that would go into planets throughout the history of the Milky Way, we calculated how long we can expect planets to have enough volcanism to support a temperate climate before running out of power. Under the most pessimistic conditions we estimate that this critical age is only around 2 billion years old for an Earth-mass planet and reaching 5–6 billion years for higher-mass planets under more optimistic conditions. For the few planets we do have ages for, we found only a few were young enough for us to confidently say they can have surface degassing of carbon today, when we’d observe it with, say, the James Webb Space Telescope.” 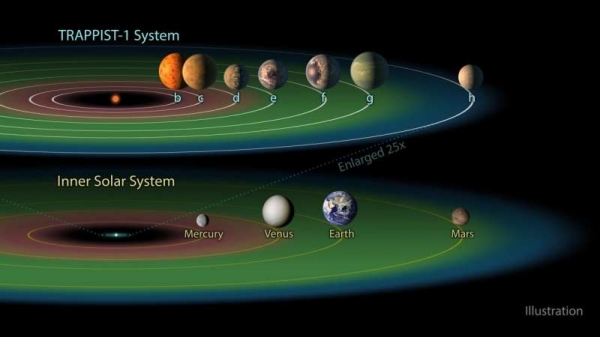 Image: An SwRI-led study suggests that host-star age and radionuclide abundance will help determine both an exoplanet’s history and its current likelihood of being temperate today. For example, the red dwarf star TRAPPIST-1 is home to the largest group of roughly Earth-sized planets ever found in a single stellar system with seven rocky siblings including four in the habitable zone. But at around 8 billion years old, these worlds are roughly 2 billion years older than the most optimistic degassing lifetime predicted by this study and unlikely to support a temperate climate today. Credit: NASA/JPL-Caltech.

Remember that this is a deliberately pessimistic model. It’s also the case that abundances of heat-producing elements are only one factor that can change the degassing lifetime of a planet, and the authors are quick to point out that they do not include these in their model. Thus we could consider the current study a contribution toward a broader model for planetary heat budget analysis, one that should be expanded through examining such factors as cooling after planet formation, the energy released when core and mantle differentiate, and tidal heating induced by the host star or other planets in the system. As the authors describe their results:

The framework we present here that combines direct and indirect observational data with dynamical models not only provides us with a pessimistic baseline for understanding which parameter(s) most control a stagnant-lid exoplanet’s ability to support a temperate climate but also indicates where more lab-based and computational work is needed to quantify the reasonable range of these parameters (e.g., mantle reference viscosity). As we move to more in-depth characterization of individual targets in the James Webb Space Telescope era, these direct and indirect astronomic observables, coupled with laboratory data and models from the geoscience community, will allow us to better estimate whether a rocky exoplanet in both the canonical and temporal habitable zones has exhausted its internal heat and is simply too old to be Earth-like.

We are positioning ourselves, as highlighted by the ongoing commissioning of the James Webb Space Telescope, to begin the analysis of planetary atmospheres at scales smaller than gas giants, meaning that the kind of computational modeling at work in this paper will increasingly be refined by observation. The interactions between a planet’s surface and its interior then become better defined as markers for habitable worlds, with radionuclides a significant factor in producing climate stability.